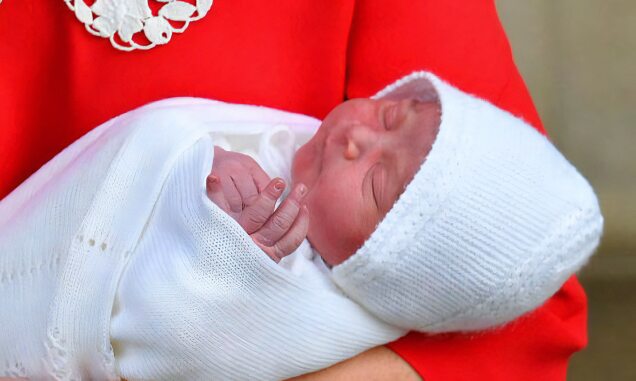 Like his brother Prince George and sister Princess Charlotte before him he was born at the Lindo Wing of St Mary's Hospital in London and weighed 8lb 70z, the Duke of Cambridge was present for the birth. Kensington Palace reported that the Queen, the Duke of Edinburgh, the Prince of Wales, the Duchess of Cornwall, Prince Harry and members of both families were "delighted with the news" of the new arrival.

Prince Louis is fifth in line to the throne after his elder siblings, Prince George and Princess Charlotte and also shares his birthday with the famous bard, William Shakespeare. He is the Queen's sixth great-grandchild.

The new arrival's name was announced by Kensington Palace on 27th April as Prince Louis Arthur Charles. Louis, which means “renowned warrior, is an unusual choice for an English prince. The name has previously been borne by 18 kings of France, but is also Prince William's last name and honours Prince Philip's maternal uncle, Louis Mountbatten, Earl Mountbatten of Burma, who was the mentor to Prince Charles whom he referred to as his "honorary grandfather". Earl Mountbatten, who served in two world wars and was involved in the partition of India and the Suez Crisis, was assasinated by the IRA while holidaying in Ireland in August, 1979. The name Arthur, which means “bear” in Celtic, was used for Queen Victoria's 3rd son, Prince Arthur, Duke of Connaught and is also shared as a middle name by Prince William and Prince Charles. The third name, Charles, obviously pays tribute to his grandfather.

Siblings Prince George and Princess Charlotte arrived at St Mary’s Hospital to meet their new baby brother for the first time later the same day, with Princess Charlotte waving enthusiastically to the crowds. The Duke and Duchess of Cambridge later emerged from the Lindo Wing with the new arrival later the same afternoon, the Duchess wearing a red dress from by British designer Jenny Pacham, which featured a white Peter Pan collar which was of a similar design to the dress worn by Princess Diana wore when introducing Prince Harry. After  pausing on the steps of the hospital for photographs, where they were greeted by cheers, the couple returned to Kensington Palace with their new son..

Following the Succession to the Crown Act of 2013, granting females equal succession rights as males, Louis becomes the first prince in English history not to take precedence to his older sister in the line of succession to the crown.