Caractacus, sometimes known as Caratacus or Caradoc, was the son of the Celtic king, Cunobeline, was the king of the Catuvellauni tribe inhabited the Hertfordshire area. The Catuvellauni were an aggressive tribe, who extending their territory at the expense of nearby tribes like the Atrebates and had previously opposed the Romans under their chief Cassivellaunus.

Following the death of Cunobelinus, his kingdom was divided between Caractacus and his brother, Togodumnus, who became the leaders of a Celtic campaign that succeeded in resisting the invaders for a period of nearly nine years.

Emperor Claudius launched his invasion of Britain in the summer of 43 AD. Caractacus adopted guerrilla tactics to resist the Roman general Aulus Plautius. The Dobunni tribe of western Britain submitted to the invaders, but Caractacus and his brother Togodumnus met the Romans in battle in the lands of the Cantii tribe (now Kent). 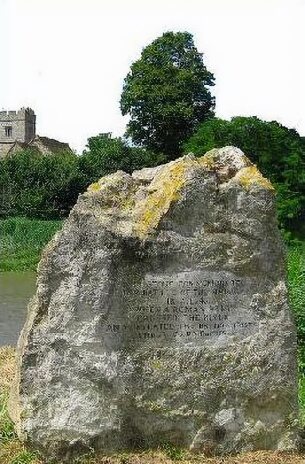 The historian Cassius Dio, the only source of information on the battle, does not name its location. The Romans are thought to have used existing trackways as they moved west from their embarkment site at Richborough, near Dover and the most well-travelled prehistoric trackway would have been the route of the later Pilgrims' Way, which forded the River Medway at Aylesford. Other theories, however, argue that the river is narrow enough at Aylesford not to present significant difficulties in crossing, and place the battle closer to Rochester, where a large Iron Age settlement then stood. Further evidence of a more northern location has been unearthed at Bredgar, where a find of a hoard of Roman coins from the period has been interpreted as being buried for safekeeping before a battle. This hoard could, however, post-date the battle by as much as 20 years.

The battle was opened by the Romans before dawn, as there was no bridge over the river that divided the opposing forces, a detachment of Celtic Cohorts swam across the water and attacked the Celts' chariot horses, slashing at their legs, which effectively dismounted a large contingent of the Celtic charioteers. The bulk of the invasion force spearheaded by Legio II Augusta under the future Emperor Vespasian surged across the river, under the overall command of Titus Flavius Sabinus II, attacking the British flank and rear. The fighting ended without a result. On the following second day, an attack led by Gnaeus Hosidius Geta almost led to his capture by Caractacus' forces. The Romans retaliated and the Celts were forced into flight. Caractacus then withdrew across the Thames into Essex.

Caractacus lost much of the south-east after being defeated in the two crucial battles on the rivers Medway and Thames. Some tribes, realising that the end was near, made peace with the invaders, but Caractacus fought on. After Togodumnus was slain, possibly after having been taken prisoner, and resistance to the Romans collapsed in the South-East of England, Caractacus established himself with the Dubonni tribe, He then went on to lead the Silures and Ordovices of Wales against Plautius' successor as governor, Publius Ostorius Scapula.

The Romans marched on Wales and Caractacus proceeded north in an attempt to join forces with the fierce Ordovices of North Wales. He was finally defeated at the Battle of Caer Caradoc by Scapula in 51 A.D in the mountains of North Wales in the territory of the Ordovices.

The site of the battle is unknown, prior to the battle Caractacus is said to have exhorted his countrymen that it would either " win back their freedom or enslave them forever". The battle resulted in a Roman victory. His wife and daughter were captured and his brothers surrendered. Caratacus himself escaped and fled northwards to the lands of the Brigantes tribe, where the Brigantian queen, Cartimandua, treacherously handed him over to the Romans in chains. The Brigantes later revolted against Cartimandua and her Roman allies, led by Venutius, who had once been Cartimandua's husband and the Romans were obliged to intervene to save the queen. Caractacus and his family were taken as prisoners to Rome

First in the procession came the king's dependents and retinue; next to his brothers, his wife and daughter, and last himself was presented to public view; his body was mostly naked and painted with figures of beasts; he wore a chain of iron about his neck, and another about his middle; the hair on his head hanging down in curled locks covered his back and shoulders. Caradoc neither by his looks nor language pleaded for mercy. The Roman historian Cassius Dio recorded:-

"Caratacus, a barbarian chieftain who was captured and brought to Rome and later pardoned by Claudius, wandered about the city after his liberation; and after beholding its splendour and its magnitude he exclaimed: 'And can you, then, who have got such possessions and so many of them, covet our poor tents?'"

Emperor Claudius spared Caractacus and he spent the remainder of his life in Rome. With the capture of Caratacus, much of southern Britain from the Humber to the Severn was pacified and garrisoned throughout the 50s.

The Roman Conquest of Britain PreviousNext The Battle of Caer Caradoc