Egbert, in Old English Ecgbehrt, the first King of all England, was born around 770-780. He was the son of Ealhmund, King of Kent, who is mentioned in a charter of 784.

Ealhmund was himself the son of Eafa, King of Wessex, by a Kentish princess. The House of Wessex boasted of a descent from no less a personage than the great Woden himself. The Anglo Saxon Chronicle records the descent of Egbert from Cerdic, a Saxon invader who landed on the south coast in 495. Following the murder of King Cynewulf, Egbert's kinsman, Beothric was elected to the vacant throne of Wessex in 786, but Egbert, who considered himself to have a better claim, contested his right.

Statue of Egbert from Lichfield Cathedral 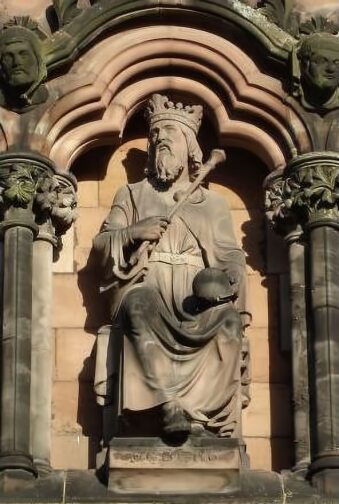 Egbert was forced to take refuge at the court of the powerful Offa, King of the tribal kingdom of Mercia. Beothric responded by proposing an alliance between himself and Offa, which was to be cemented by his marriage to Offa's daughter Eadburgha. He further requested that Offa deliver the rebel Egbert to him. Offa accepted Beorthric's offer for his daughter's hand in marriage, but instead of handing over Egbert to his enemy and certain death, he merely banished him from England.

Egbert was forced to flee to France, then ruled by the Emperor Charlemagne and is said to have served in his army. He remained safely in France for the rest of Beothric's reign in Wessex. He contracted a marriage to Redburga, a Frankish princess, said by some authorities to have been the sister of Charlemagne, although she remains a shadowy figure about whom very little is known. The marriage of Egbert and Redburga produced two sons and a daughter.

On the death of Beothric, Egbert returned to his native England to claim the vacant throne of Wessex in 800 and was accepted although the Mercians opposed his rule. Wessex was attacked by the Hwicce, under ealdorman Ethelmund (the Hwicce had originally formed a separate tribal kingdom, but by that time formed part of Mercia). Weohstan, a Wessex ealdorman and said by one source to be Egbert's brother-in-law, met him with men from Wiltshire. The Hwicce were defeated, and Weohstan and Ethelmund slain.

Inspired by Frankish military and imperial ideas, Egbert made rigorous efforts to bring the native Britons, or Celts, into subjection, eventually, all of what is now Wales was subject to his authority. Egbert defeated the rival king Beornwulf of Mercia in battle at Ellandune, near Swindon and marched an army into Kent, at that time under Mercian rule. Baldred, the Mercian under-king of Kent, fled and the Kentish men declared for Egbert. Surrey, Sussex and Essex followed suit. Egbert's elder son, Ethelwulf was made sub-king of these regions.

The East Anglians, who were also subjects of the Mercian king, rebelled. Beornwulf, King of Mercia was intent on re-asserting his authority in the province. The East Anglians placed themselves under the protection of Egbert of Wessex, who came to their aid and Beornwulf himself was killed in the ensuing conflict. Wiglaf was elected to succeed him in 829. Allowing Wiglaf no time for preparation, Egbert hastily advanced into Mercia and expelled him from the kingdom, making himself ruler of all of England south of the Humber. Egbert then turned his attention to the Anglian kingdom of Northumbria, which also fell to him. He now controlled all of England. He had triumphed, he was Bretwalda. 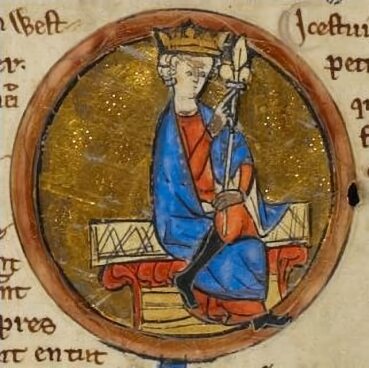 The Vikings, Danish and Norwegian raiders, had first ravaged the shores of England in 793, recorded in a dramatic entry in the Anglo-Saxon Chronicle :-

'In this year dire portents appeared over Northumbria and sorely frightened the people. They consisted of immense whirlwinds and flashes of lightening and fiery dragons were seen flying in the air. A great famine immediately followed these signs, and a little after that in the same year, on 8 June, the ravages of heathen men miserably destroyed God's church on Lindisfarne, with plunder and slaughter.'

Further terrifying Viking attacks followed and began to grow in strength in the last years of Egbert's reign. They came from over the sea from Denmark and Norway in their dragon prows, or longships. In 835, the Vikings raided the Isle of Sheppey, Egbert lead an army against them at Carhampton on the North Devon coast. The Celts of Cornwall and Devon, known to the Saxons as Wilisc men (i.e. foreigners) allied themselves with the Danes. Egbert defeated them but by the time of his death in 839 the Viking raids had become annual occurences and Mercia had regained its independence.

Egbert was was succeeded on the throne of Wessex by his eldest son Ethelwulf, and was buried at Winchester. Following the Norman conquest, Winchester Cathedral was erected on the Saxon site of the Old Minster. The Royal remains, including King Egbert's bones, were exhumed and placed around St. Swithin's Shrine in the new building. However in the seventeenth century, during the English Civil War, the bones, after being used by Cromwell's soldiers as missiles to shatter stained glass windows, were scattered and mixed in various mortuary chests along with those of other Saxon kings and bishops and the Norman King William Rufus. The chests remain today, seated upon a decorative screen surrounding the presbytery of the Cathedral.

Scientists from Bristol University now plan to examine the skeletal remains, which include those of the Egbert and his son Ethelwulf. The chests have been placed in the Lady Chapel of the cathedral to allow examinations to be carried out without removing them from consecrated ground. A Heritage Lottery Fund grant has been applied for to finance the project. Experts from Bristol University will use the DNA techniques, team leader Professor Mark Horton has stated 'The preliminary findings are very exciting.'

The principal or capital town of Wessex was Winchester. Prior to Egbert's reign, Kent, with the see of Canterbury, as well as London, was under the control of Mercia. The most famous churchman of his reign was St. Swithin, Bishop of Winchester. Little is known with certainty of the life of St. Swithin, Egbert made him responsible for the education of his son and heir Ethelwulf. 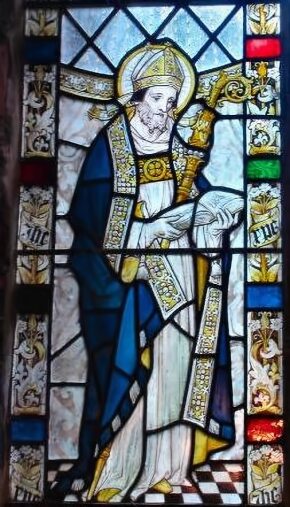 St. Swithin was buried at Winchester Cathedral in 862, where a shrine was built around the tomb, his death is recorded in the Anglo-Saxon Chronicle. When his tomb was opened in 971, 40 days of rain were reported to have occured. A popular rhyme has attached itself to the superstition:-

Coloured window glass, wall decorations and tile floors from this period have been discovered during excavations at Winchester Cathedral. More than a hundred years later, when St. Dunstan and Ethelwold of Winchester were inaugurating their church reforms, Saint Swithun was adopted as patron of the restored church at Winchester. The shrine was destroyed at the Dissolution of the Monasteries under Henry VIII. The feast of St. Swithin is celebrated on 15th July.