The Battle of Lincoln 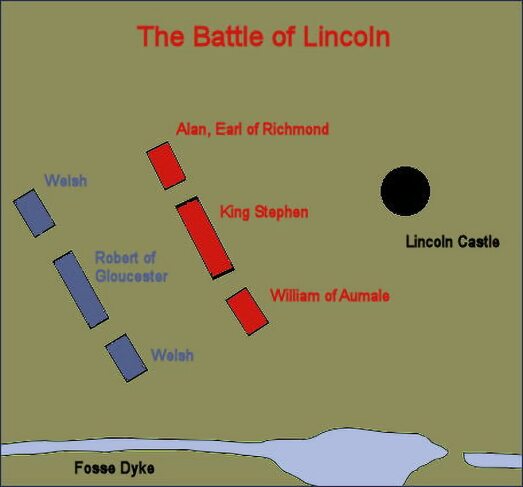 The contest between King Stephen and his cousin the Empress Matilda, daughter of King Henry I, for the crown of England went on for nineteen long years, known as 'the Anarchy', with first one side then the other gaining the upper hand.

Ranulf de Tailebois, a supporter of Matilda, seized control of Lincoln Castle and fortified it against attack. The inhabitants of the town appealed to King Stephen for aid.


In around Christmas, 1140, the King duly responded to the citizen's plea for help, seizing control of the town and laid siege to Lincoln Castle. Stephen's forces were then attacked by a relief force led by Matilda's illegitimate half-brother, Robert, Earl of Gloucester.

Robert's army was composed of his own men and those of Ranulf, Earl of Chester, who had deserted Stephen after much of his lands had been ceded to David I of Scotland. The flanks of Robert's army were guarded by the Welsh troops of Madog ap Maredudd, Lord of Powys, and Cadwaladr ap Gruffydd, the enemies of Hugh Mortimer of Wigmore, Stephen's supporter in the west, about a third of the rebel army consisted of Welshmen.

King Stephen was aware that he was threatened by a large force, but refused to listen to the advice of those that urged him to either flee or seek a truce, and decided to remain at Lincoln and fight.

On 2 February, 1141, Robert's army crossed the swollen Fossdyke, Stephen's army, supported by a force of six earls; Richmond, Norfolk, Southampton, Surrey, Worcester and Aumale. The first five commanded the right wing of the king's army while the earl of Aumale commanded the king's left flank.

As Stephen's lieutenant Baldwin fitz Gilbert addressed his army, the enemy cavalry advanced. Stephen abandoned his superior defensive position and advanced down from the city heights to meet them.

On the left William of Aumale and William of Ypres charged into Robert's Welsh division, but were routed by the force of Earl Ranulf. With his forces in retreat and many of his men were killed or captured. Stephen and his knights were surrounded by Robert of Gloucester's men. Stephen fought back valiantly:- 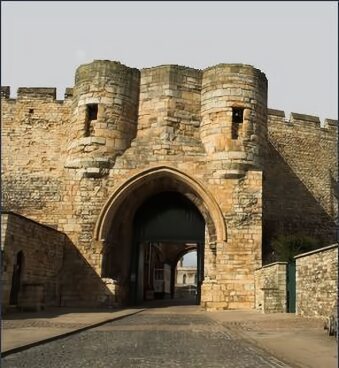 'where stood that most valiant king, as the foe dreaded the incomparable force of his blows. The earl of Chester, on perceiving this, envying the king his glory, rushed upon him with all the weight of his armed men. Then was seen the might of the king, equal to a thunderbolt, slaying some with his immense battle-axe, and striking others down. Then arose the shouts afresh, all rushing against him and him against all. At length through the number of the blows, the king's battle-axe was broken asunder. Instantly, with his right hand, drawing his sword, well worthy of a king, he marvellously waged the combat, until the sword as well was broken asunder.

Ranulf, earl of Chester, rushed upon the king with a force of armed men. Sir William Kahamnes rushed on the king, and seized him by the helmet.


The rest of Stephen's division fought on until all had either been killed or had surrendered. Baldwin fitz Richard and Richard fitz Urse were taken prisoner.

After fierce hand-to-hand fighting in the streets of Linncoln, Stephen's forces were eventually defeated. Many of the citizens of Lincoln, hearing news of the king's defeat, fled their homes and attempted to cross the nearby river, to escape by boat across the water, but many were drowned when the boats capsized in the general panic which ensued.

Stephen was handed over to his cousin Matilda and taken captive to Gloucester before being imprisoned in Bristol Castle. The fickle wheel of fortune turned once more when Robert of Gloucester was captured by Stephen's Queen, Matilda of Boulogne. An exchange of prisoners was finally agreed upon, with no side gaining the upper hand. Matilda was defeated at the Rout of Winchester the following September, ending her short lived ascendancy in the wars of the Anarchy.