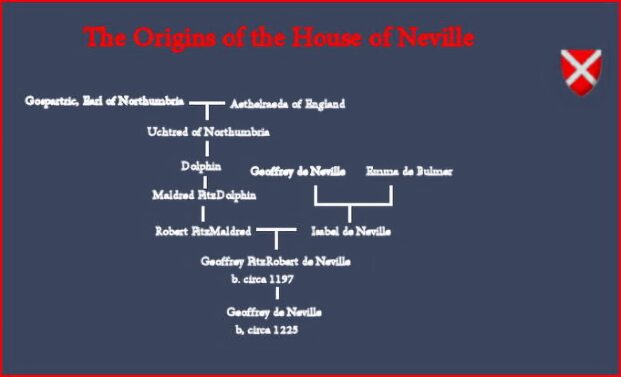 The Neville family, powerful in the north of England for centuries, surprisingly originated from Anglo-Saxon, not Norman stock, and had most probably been part of the pre-conquest aristocracy of Northumbria. Their Norman surname was only assumed in the thirteenth century.

The family can be traced back to Gospatric, Earl of Northumbria, a great-grandson of the Saxon King Ethelred II through his mother, Ealdgyth. Gospatric, allied to Edgar Ætheling, the Saxon heir to the throne and Earls Edwin and Morcar led a failed uprising against William the Conqueror in 1068. William confiscated Gospatric's earldom in 1072, who later died in exile in Scotland.

Gospatric's grandson Dolfin is first attested in 1129, holding the manor of Staindrop in County Durham. Staindrop was to remain the principal seat of the family until 1569, their chief residence being at Raby in the north of the parish of Staindrop.

Dolfin was succeeded by his son Maldred and he in turn by his son Robert, who married the Norman heiress Isabel de Neville. Their son Geoffrey, was born in born 1187 at Raby, he inherited the estates of his mother's family in addition his father's, and adopted his mother's family's Norman surname, which was then passed on to his descendants. Prior to the Neville marriage the family were already a major power in the area.

Service in the wars of the late thirteenth and fourteenth centuries against Scotland and later in the Hundred Years War in France further increasing the House of Neville's standing. 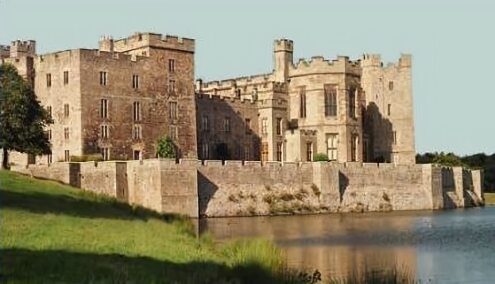 In 1334, Ralph Neville, 2nd Lord of Raby was appointed one of the wardens of the marches and the Nevilles habitually appointed these posts thereafter. Along with William Zouche, Archbishop of York and Henry Percy, Ralph led the English forces to victory against an invading Scottish army at the the Battle of Neville's Cross outside Durham and captured David II, King of Scots in 1346. To commemorate the English victory, Ralph Neville ordered a cross erected on the battlefield, from which the battle derives its name.

Ralph and his wife Alice Audley produced a large family, which included John Neville, 3rd Baron of Raby, (b 1322) Alexander Neville, (b. 1324) Ralph Neville, Robert Neville, William Neville, Catherine, Eleanor, Euphemia and Margaret Neville, who married Henry Percy, Earl of Northumberland the son of the renowned Harry Hotspur. The mid fourteenth saw the family begin to hold high office at court and in the Church. Ralph Neville served as Steward of the Royal Household and on his death was succeeded in the office by his eldest son John, while John's brother Alexander became Archbishop of York and a close advisor of King Richard II.

John, the 3rd Baron built the impressive fourteenth century fortress of Raby Castle at Staindrop, which occupies the site of a palace built by King Canute. The castle is composed of a curtain wall with eight massive towers surrounding a central keep. The main entrance was in the west through the four-storey Neville Gateway. It remains one of England's finest medieval castles. John was also responsible for building another Neville stronghold, Sherrif Hutton Castle, which occupies the site of a motte and bailey castle of his ancestor Bertram de Bulmer, Sheriff of York during the reign of King Stephen (c. 1135-1154). The present remains of this quadrangular castle consist of its towers, only sections of which stand to their original height, the ranges of buildings and curtain walls between have now largely diappeared. The entrance lies in the east wall, protected by a gatehouse.

John married Maud de Percy, daughter of Lord Henry Percy, first Earl of Northumberland. Their son, Ralph Neville born in 1363 became 4th baron of Raby. By the late fourteenth century the Neville's had acquired extensive estates in northern England. Besides their original powerbase in County Durham, they possessed another very large, block of land in the North Riding of Yorkshire and major holdings in Cumberland and Northumberland. They also held scattered estates in Lancashire and further south in Lincolnshire, Norfolk, Northamptonshire, Bedfordshire and Essex. 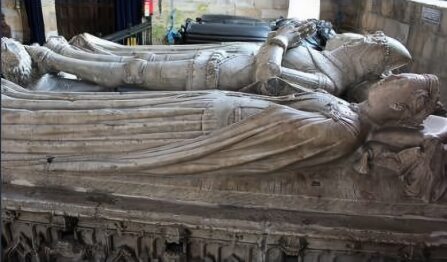 Ralph Neville inherited his fathers title of Baron Neville of Raby at the age of 24 after his father's death on 17 October 1388. The Nevilles' rose into the highest echelon of the aristocracy when in 1397 when King Richard II created Ralph Neville Earl of Westmorland. At this time the Neville family's power in the north of England was matched only by the Percy family, Earls of Northumberland, with whom they developed a bitter feud. The monarch, whose power base was located in the south, had to rely on powerful lords from both houses to protect the border from Scottish invasion. 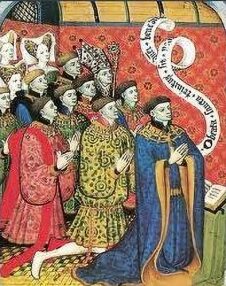 Due to the fact that the Neville's had previously been supporters of Richard II, they were unpopular with the Lords Appellant. Recognizing this Ralph Neville accordingly hastily switched sides, deserted the king and joined the rival Lancastrian claimant Henry of Bolingbroke when he landed in England to overthrow Richard's government in 1399. Bolingbroke took the throne as Henry IV and in reward for the instrumental part he played in the defeat of Richard II, Westmorland was given the new king's half-sister Joan Beaufort, as his bride. Joan Beaufort was the illegitimate daughter of John of Gaunt, Duke of Lancaster and his mistress Katherine Swynford. Gaunt and Katherine Swynford were later married and their children, the Beaufort's were later legitimated by King Richard II.

Henry IV continued Richard II's policy of bolstering the strength of the Nevilles as a check to the troublesome Percys, 'strutting the northern shires like kings' and the family gained from the weakening of Percy power after the failure of the revolt of Henry "Hotspur" Percy and his death at the Battle of Shrewsbury in rebellion against Henry IV. 1403.

While it increased the prestige of the Nevilles, the royal marriage also led to a serious rift in the Neville family. Ralph Neville had previously been married to Margaret de Stafford, and the earldom of Westmorland passed to his son by this first marriage. However, Ralph clearly favoured his sons by his second marriage, who inherited the bulk of his estates on his death, leading to bitter disputes over the inheritance and lasting estrangement between the Nevilles of Raby, who descended from Margaret Stafford, and the Nevilles of Middleham, descended from Joan Beaufort.

In addition to this rich inheritance, the Nevilles of Middleham acquired vast estates through marriage. Ralph's eldest son by Joan, Richard Neville, acquired the earldom of Salisbury by marriage to its heiress, Alice Montacute, daughter and heiress of Thomas Montacute, the Earl of Salisbury.

Their son Richard became Earl of Warwick by his marriage to the heiress Anne Beauchamp. On the death of the Earl of Warwick in 1446, the Earldom of Warwick and its vast estates were inherited by his young daughter, Lady Anne Beauchamp. When she died in 1449 at the age of five, the Earldom devolved to Richard Neville, who held it in right of his wife, another Anne Beauchamp, the sister of the last Beauchamp earl. Both Salisbury and Warwick supported Richard, Duke of York, the Yorkist claimant to the throne during the early stages of the Wars of the Roses. Salisbury's sister Cecily 'the Rose of Raby' had married the Duke of York. York and Salisbury were both slain at the Battle of Wakefield in 1460, but Warwick aided York's son, his cousin Edward, the new Duke of York, to supplant Henry VI and gain the throne as King Edward IV a few months later.

The Percies supported the Lancastrian cause, and following the death of Henry Percy, Earl of Northumberland in the decisive Lancastrian defeat at the bloody and ferocious Battle of Towton in 1461 the Middleham Nevilles were triumphant over their rivals, acquiring the earldom of Northumberland for Warwick's brother John in 1465. The Raby Nevilles led by Ralph Neville, Earl of Westmorland had taken up the Lancastrian cause, from the outset, Westmorland's brother John Neville, Lord of Raby was killed at Towton. The Earl of Westmorland himself emerged from the Wars of the Roses unscathed. The Percy heir was eventually reconciled with Edward IV and regained his inheritance the following year, John Neville was compensated with the title of Marquess of Montagu.

Warwick, who became known as 'the Kingmaker' the richest and most powerful man in England after the king, was the power behind the throne in the early days of Edward's reign, but the king's secret marriage in 1464 to the commoner Elizabeth Woodville, humiliated and angered Warwick and led to an increasingly bitter rift between the cousins. In 1469 Warwick seized control of government adied by his brother George Neville, Archbishop of York and Edward's younger brother George, Duke of Clarence, who detested the new queen and was allied to Warwick through his marriage to Warwick's elder daughter, Isabel Neville. They imprisoned Edward IV at the Neville stronghold of Middleham Castle in Yorkshire and sought to rule in his name, but the new regime was unable to impose its authority and were obliged to eventually release the king.


Following the failure of a second rebellion, which intended to place the Duke of Clarence on his brother's throne, Warwick and his allies were forced to flee abroad, where they allied themselves with Queen Margaret of Anjou, and the exiled Lancastrians. Warwick's youngest daughter Anne Neville was married to Margaret's son Edward, the Lancastrian Prince of Wales, to cement their alliance. Warwick briefly restored Henry VI to the throne in 1470, however he and his brother Montagu were slain at the Battle of Barnet in 1471 and Edward IV resumed power. The body of the once mighty Earl of Warwick, together with that of his brother, John, Marquess Montagu, were later displayed at St. Paul's covered only with a loin cloth, before being buried at Bisham Priory in Berkshire. Their estates were confiscated and granted to Edward's youngest brother Richard, Duke of Gloucester, the future Richard III who had married Warwick's now widowed younger daughter, Anne Neville.

In the sixteenth century the Nevilles made claims that their ancestor Uhtred was descended from Crinan of Dunkeld, ancestor of the ancient royal Scottish House of Dunkeld. However modern genealogists have failed to find direct written evidence to support the link with the House of Dunkeld.

In 1569 the Nevilles and Percies buried their traditional rivalry to take part in the Revolt of the Northern Earls, an attempt to overthrow the Protestant Queen Elizabeth I and replace her with her Catholic cousin, Mary, Queen of Scots. After the failure of the rebellion, Charles Neville, Earl of Westmorland, fled abroad. He was attainted and lost his title and estates, and left no male heir, thus extinguishing the senior Neville line.

A junior branch of the family did survive, who descended from one of Ralph Neville's sons by Joan Beaufort and holding the title Baron Bergavenny. Mary Neville, the daughter of Henry Nevill, 6th Baron Bergavenny fought a long legal battle to be recognised as heiress to all the remaining Neville estates and eventually these lands were split between herself and her cousin Edward Nevill. Her son Francis Fane, 1st Earl of Westmorland inherited the very old title Baron le Despencer; to him, the Neville family's senior title Earl of Westmorland was recreated and the peerage remains with his male line descendants.