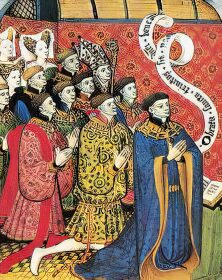 At the time of John's birth, the Neville family, had been powerful in the north of England for centuries, they rose into the highest echelon of the aristocracy in 1397 when King Richard II created John's grandfather, Ralph Neville of Raby, Earl of Westmorland.

At this time the Neville family's power in the north of England was matched only by the Percy family, Earls of Northumberland, with whom they developed a bitter feud. The monarch, whose power base was located in the south, had to rely on powerful lords from both houses to protect the border from Scottish invasion. John played a prominent role in the armed conflicts between the Nevilles and the Percies in Yorkshire, he took part in the battle at Castleton, where the Nevilles were victorious over the Percies, John carried off Lord Egremont and his brother Richard Percy to the Neville stronghold of Middleham Castle (pictured left) .

On the outbreak of the Wars of the Roses, the Nevilles allied themselves with Richard Duke of York who challenged Henry VI's right to occupy the throne. York was married to John's aunt, Cecily Neville. John fought at the Battle of Blore Heath in 1459, alongside his father Salisbury and brother Thomas Neville where Salisbury routed the Lancastrian troops, Thomas and John Neville, while pursueing the fleeing Lancastrians, were captured and imprisoned in Chester Castle by the Lancastrians. The Yorkists were attainted and forced to flee the country in 1459 but returned to fight again soon after. After the Yorkist victory at Northampton John was released in the summer of 1459.

His father Salisbury and brother Thomas were killed fighting with Richard of York at the Battle of Wakefield in 1460, when before any reinforcements could arrive, when York inexplicably sortied from Wakefield Castle to be massacred and their heads displayed on pikes at York. John was again taken prisoner at the Second Battle of St Albans in 1461, although his life was spared he was held captive at York until he was eventually released for a second time. Following the substantial Yorkist victory Battle of Towton fought Palm Sunday, 29 March 1461, York's eldest son, Edward Earl of March, was crowned as King Edward IV.

Montague later commanded the Yorkist forces in the north of England, defeating the Lancastrians uder the Duke of Somerset and Sir Ralph Percy at Hedgeley Moor and again at Hexham in Northumberland, where the battle was brief but bloody, the Lancastrians had just taken taken up their positions when the Yorkist army charged them from higher ground, Somerset was executed after the battle. John was rewarded by Edward IV who invested him in 1462 as a Knight of the Garter, the following year he was appointed warden of the east march.

In 1464 Edward IV created John Earl of Northumberland, which had belonged to Henry Percy, who had been killed at the Battle of Towton. The title had long been long belonged to the Percy family, he was also awarded the Percy estates. Warwick and his brother were alienated from the king by Edward's secret marriage to Elizabeth Woodville, while Warwick had been negotiating a marriage alliance with the French for the hand of Bona of Savoy. Elizabeth was the impoverished widow of a Lancastrian knight and her needy and grasping family were generally disliked and distrusted by the old established nobility.

Warwick entered into plots with Edward's unruly and untrustworthy younger brother, George Duke of Clarence, who was married to his daughter, Isabel Neville. They temporarily took Edward captive but were forced to release him. To ensure his loyalty, John's son, George Neville was betrothed to Edward's eldest daughter, Elizabeth of York and George was further created Duke of Bedford.

Henry Percy's son and heir Henry, who had been imprisoned by Edward was released from his captivity. John played no part in Warwick and Clarence's revolt against Edward and they were forced into exile, but clearly Edward no longer trusted the Nevilles. He forced Montagu to give up the title and restored it to Henry Percy in 1470, Montagu was forced to give up the earldom and many important offices in favour of his former foe. To compensate for this loss he was created Marquess of Montagu, but without suitable estates or income to support such a dignity. 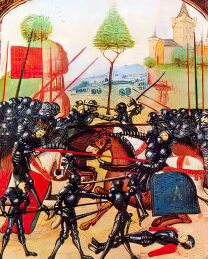 Edward IV's actions turned Montagu against him, and when Warwick, who had formed an alliance with Margaret of Anjou, landed in England in support of Henry VI, John, who had assembled assembled a large force at Pontefract, declared for king Henry and marched on Edward at Doncaster, Edward and his brother Richard Duke of Gloucester were forced to flee into exile leading to the short-lived readeption of the Lancastrian King Henry VI. Warwick entrusted his brother with the defence of the north against an attack by Edward, but the earldom of Northumberland was not restored to him.

Edward landed in Yorkshire to reclaim his throne in March 1471. Montagu was killed fighting alonside his brother Warwick at the Battle of Barnet in 1471. As the Lancastrian centre fell into disarray, Edward sent in his reserves, heralding its total collapse. Montagu himself met his end at the hands of a Yorkist or one of Oxford's men. Witnessing the demise of his brother, Warwick fled. According to the official version of the battle, the mighty Warwick was killed fleeing the field in attempt to reach his horse. Probably the most likely method of his despatch was a sword thrust into his throat, after forcing open his visor.

The bodies of Warwick and Montagu were taken to London, where they were displayed for two days at St. Paul's, to convince all that they were dead, after which they were buried at Bisham Abbey in Berkshire. John's widow Isabel remarried, on 25 April 1472 to Sir William Norreys of Yattendon.