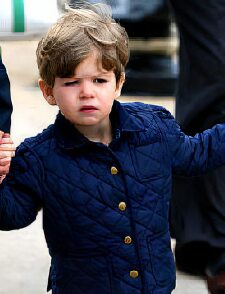 James Mountbatten-Windsor, Viscount Severn is the eighth grandchild of the Queen and Prince Philip, the Duke of Edinburgh and the only son of her third and youngest son, Prince Edward, Earl of Wessex and Sophie, Countess of Wessex, the former Miss Sophie Rhys-Jones (the daughter of Christopher Rhys-Jones and Mary O'Sullivan).

Viscount Severn is eighth in the line of succesion to the British throne and is followed by his sister, Lady Louise Mountbatten-Windsor, who now occupies ninth place.

He was born by caesarian section on 17th December 2007 at Frimley Park NHS Hospital near his parents home of Bagshot Park in Surrey, he weighed 6lb 2oz at birth. A spokesman for the Earl and Countess of Wessex reported that the couple were "absolutely thrilled" with the new arrival. Buckingham Palace announced in a statement that the Queen, the Duke of Edinburgh and Christopher Rhys-Jones, the Countess' father were "delighted with the news".

In keeping with the wish of his parents and in an attempt to shield him from media attention, in common with his sister, Lady Louise Mountbatten-Windsor, he will not bear the style HRH. The title Viscount Severn is a subsidiary title of his father, the Earl of Wessex, and is associated with the Rhys-Jones family's Welsh connections. Letters patent issued in 1917, which remain in force today assign a princely status and the style of Royal Highness to all male-line grandchildren of a monarch. James therefore is legally His Royal Highness Prince James of Wessex . However, when his parents married, it was announced that, in accordance with their wishes, their children would not be styled as princes or princesses, but rather as the children of an earl. The eldest son of an earl is customarily accorded one of his father's subsidiary titles by courtesy.

Prince Edward was present at his son's birth, speaking afterwards and alluding to the traumatic circumstances of their first child's birth, said that it was "a lot calmer than last time" and added that Sophie was "doing very well". He also commented he was relieved, and added that his son was "like most babies, rather small, very cute and very cuddly".

A name was not chosen at the birth, since, his father commented "You've got to get to know the small person who's just come into the world before you pick a name. The baby's names were announced four days later as James Alexander Philip Theo Mountbatten-Windsor, although he will use only the surname Windsor. James and Alexander were chosen simply because they are said to be names liked by his parents. While Philip commemorates his grandfather, Prince Philip, Theo is after Sophie's paternal grandfather Theo Rhys-Jones.

James, an unexpected choice of name, has extensive royal connections, James I, the former James VI of Scotland, and the first Stuart King of England, who succeeded Queen Elizabeth I in 1603, was the son of Mary, Queen of Scots, and Henry Stuart, Lord Darnley, while James II, his grandson and the brother of King Charles II, proved an unpopular king due to his conversion to the Roman Catholic religion, he was displaced on the throne by his daughter, Mary II and her husband, William of Orange in 1688. The name Alexander has been borne by three Kings of Scotland.

Viscount Severn left hospital with his parents on Thursday, 21st December, 2007 and was introduced to the rest of the Royal family over the Christmas period which was spent at Sandringham House. His sister, Lady Louise is said to dote upon him.

He was christened at the private chapel at Windsor Castle on 19th April, 2008, at aged four months, by the Dean of Windsor, Bishop David Conner, with his grandparents the Queen and the Duke of Edinburgh, Princess Anne and the Duke of York in attendance. James was the first royal baby to wear the hand-made replica of Queen Victoria's eldest daughter Vicky's Christening Gown, which was commisioned by the Queen and made by the Queen's dresser Angela Kelly and Buckingham Palace's team of dressmakers. The original Victorian lace and satin gown, made in 1841 and worn by all previous members of the Royal Family, including the Queen, her children and her father George VI, has now been preserved.