On 11th August the ominous news was related to Richard at Nottingham that his rival had landed four days previously. The King marched out to meet him. On 22nd August, 1485, the two armies faced each other just south of Market Bosworth in Leicestershire. Richard camped his army on Ambion Hill. The Stanleys cautiously situated their troops to the sides of Richard and Henry Tudor's camps, openly declaring for, nor joining either. The King demanded Lord Stanley and his brother join him and was ignored. He reacted by angrily ordering Lord Strange to be beheaded, an action which was not carried out by a subordinate, no doubt fearing for his own position, should the battle not go well for the King. John Howard, Duke of Norfolk led the vanguard of Richard's army, the King himself the centre. The Earl of Northumberland had personally requested to be in the rear to watch the threatening Stanley's forces to the side. 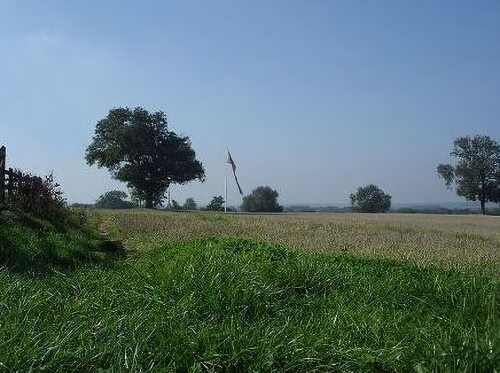 Norfolk opened the battle, leading the royal vanguard down the hill. Oxford, an experienced general, who commanded the Tudor army, skirted the hill with his men, unsure as yet of the intentions of the Stanleys. The Stanleys themselves, directed by the precarious position of Lord Strange, still made no move, but remained stationary, hovering in their menacing positions at both flanks of the battle, adding to the atmosphere of suspicion.

Oxford was heavily outnumbered and issued orders that his men were not to advance over ten feet from their standards. He had learned much from his disastrous experience at Barnet and feared he might loose command of his soldiers. He closed in, forming a wedge formation. Norfolk was killed in the fighting and his son the Earl of Surrey captured.

The eyes of the commanders remained on the looming and foreboding presence of the Stanleys, who still made no move. The air must have been thick with thoughts of treachery and self preservation. Northumberland, not having gained the power in the north he had expected from Richard, also made no move, but continued to watch the Stanleys, desiring that whatever the outcome of the battle, he, Northumberland, would be on the winning side. Richard was brought the onimous news of Norfolk's death and must have been in total despair and rage at the treachery surrounding him.

Sighting the Tudor's dragon standard, the King 'all inflamed with ire', after taking a drink from a spring later known as 'Dickon's Well', charged suicidally with his household straight for the person of Henry Tudor. It was both an impulsive and magnificently courageous gesture, if he could have just reached the Tudor, the issue would have been settled outright. Many of the Henry's supporters were killed in the headlong charge, including his standard bearer, Sir William Brandon. Watching and waiting for his moment, Stanley saw that now was the time to bring in his troops. Richard, although urged to flee, valiantly refused, insisting he would remain King of England or die in battle. 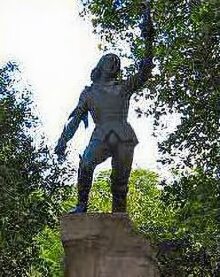 The 'shifting Stanleys' moved in for the kill and Richard 'fighting manfully in the midst of his enemies' was surrounded and fell, pierced by many wounds. (The spot where he is purported to have met his end is marked today by a plaque erected on the battlefield by the Richard III Society). Many fled on the king's death, others surrendered.

Lord Stanley retrieved England's crown, which Richard had inadvisedly worn throughout the battle, from under a hawthorn bush and placed it on the head of Henry Tudor, which was met by the exhilarated shouts of his army "King Henry, God save King Henry!" The Tudor age had begun.


The new King of England, Henry VII then proceeded to Leicester. The body of King Richard III was treated with much indignity. Trussed naked over a horse and besmirched with mud, it was borne in parade to Leicester, a sad spectacle. It was exposed for two days at the Church of the Greyfriars at Leicester, where Richard III was later unceremoniously buried.

Recent reconsideration of the site of the battle has lead to the theory that it did not take place on the traditional site of the slopes of Ambion Hill but on but on a reedy moor, around half a mile to the south, near the village of Dadlington. For several years after the event the battle was actually referred to as the Battle of Redemore.


The Posthumous Reputation of Richard III

The posthumous reputation of King Richard III has undergone many fluctuations throughout the centuries since his death on Bosworth Field. The city of York, where he had been highly popular, sincerely lamented his death in the aftermath of the battle. His successor, Henry VII did his utmost to blacken the name of his rival. Sir Thomas More's history of the reign was used by Shakespeare, who immortalized Richard III as the humped back, evil villain of the popular imagination.

It was not until after the death of England's last Tudor monarch, that George Buck felt secure to challenge the accepted view of the king in his history of Richard's reign, which was written in 1619. A century and a half later the antiquarian, Horace Walpole, son of the Prime Minister, Robert Walpole, published his 'Historic Doubts on the Life and Reign of Richard III' in which he gave a sceptical examination of Richard's supposed crimes. 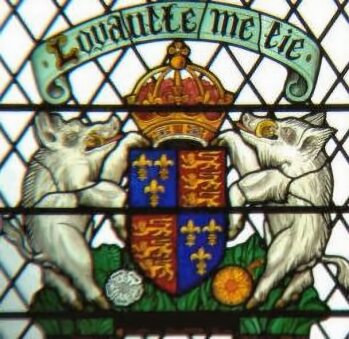 Sir Clements Markham rode into the lists as Richard's champion in 1906 with his 'Richard III : his life and character', whereby the king's reputation reached its zenith. 'The Fellowship of the White Boar' was founded in 1924, later to become the Richard III Society, which has dedicated itself to clearing his name. Paul Murray Kendal's biography of 1955 looked closely at the evidence, but came down on the side of the traditional view of Richard. Controversy has continued to rage ever since as to whether he was in fact guilty of his nephew Edward V's murder and the other crimes attributed to him.

Skeletons which are presumed to be those of the Princes in the Tower were discovered in 1674, when workmen employed in demolishing a staircase within the Tower of London, leading to the chapel of the White Tower, made the discovery of the bones of two children in an elm chest, at around a depth of ten feet. They were originally thrown aside with some rubble until their significance as the possible bones of the two princes was recognised. Charles II, then the reigning monarch, asked the architect Sir Christopher Wren to design a white marble container and they were reverently placed in the Henry VII chapel at Westminster Abbey, close to the tomb of the Prince's sister, Elizabeth of York.

These bones were subject to a medical examination in 1933, which was conducted by Lawrence Tanner, the Abbey archivist, Professor William Wright, one of the leading anatomists of his day, and George Northcroft, then president of the Dental Association. Tanner and Wright concluded that they believed these were the bones of two children, the eldest aged twelve to thirteen and the younger nine to eleven, they further stated that a blood stain on the elder skull was consistent with death by suffocation, and that congenital missing teeth and certain bilateral Wormian bones of unusual size on both crania were evidence of consanguinity. The lower jaw of the elder child exhibited extensive evidence of the bone disease, osteomyelitis.

The Tanner and Wright report has been subject to expert scrutiny on many occasions since then. Modern conclusions vary. There is consensus of opinion among modern experts that Wright's determination of the ages of the skeletons and the age differential between the two sets of bones is approximately correct, although great differences of age calculated by the development of bones and teeth has been observed in studies. Later reports claim to be unable to determine the sex of either skeleton. Determination of consanguinity by congenitally missing teeth or bilateral Wormian bones remains disputed. As regards the staining which is present on one of the skulls, it is unproven that it is actually a blood stain and modern experts deny it being proof of suffocation. In the absence of modern carbon dating or DNA analysis on the forensic evidence of the bones, it is still not possible to say that these are the bones of Edward V and his brother. The Abbey authorities have to date refused a second examination.

With regard to Richard's other alleged victims, there are several versions concerning how Edward, the Lancastrian Prince of Wales, met his end, one states he was cut down as he fled north in the aftermath of the Battle of Tewkesbury.Another states that following the rout of the Lancastrians at Tewkesbury, a small contingent of men under the Duke of Clarence found Edward near a grove, where he was immediately beheaded on a makeshift block, despite pleas for mercy to his brother-in-law Clarence. An alternative version was given by three other sources: The Great Chronicle of London, Polydore Vergil and Edward Hall, which was the version used by Shakespeare. This records, that Edward, having survived the battle, was taken captive and brought before Edward IV who was with George, Duke of Clarence; Richard, Duke of Gloucester; and William, Lord Hastings. The king received the prince graciously, and asked why he had taken up arms against him. The prince replied defiantly, "I came to recover my father's heritage." The king then struck the prince across his face with his gauntlet hand and those present with the king then suddenly stabbed Prince Edward with their swords.

The Yorkist version of Henry VI's end, that he died of "pure melancholy and displeasure" on hearing on of his son's death was not much accepted, even at the time. Due to controversy over the manner of his death, George V gave permission to exhume the body of King Henry VI in 1910. The skeleton was found to have been dismembered before being placed in the box and not all the bones were present. Three very worn teeth were found and the only piece of jaw present had lost its teeth before death. The bones were recorded as being those of a strong man measuring five feet nine to five feet ten inches tall. Light brown hair found matted with blood on the skull confirmed that Henry VI had died as a result of violence.

The majority of contemporary chroniclers believed Henry had been murdered. Richard, Duke of Gloucester was present at the Tower that night, as were many others. After the passage of over five hundred years, the facts of the enigma can never be properly ascertained. Ultimately, the responsibility for Henry VI's murder can only be laid at the feet of Edward IV.

Update- the Remains of Richard III