Prince Leopold was born on 7 April 1853 at Buckingham Palace, he was eighth child and fourth son of Queen Victoria and Albert of Saxe-Coburg-Gotha, the Prince Consort.

During her labour, Queen Victoria was given "blessed chloroform" to relieve the pain for the first time. The new arrival was named after King Leopold I of Belgium, Queen Victoria's favourite uncle. The child was baptised Leopold George Duncan Albert in the Private Chapel of Buckingham Palace on 28 June 1853 by the Archbishop of Canterbury.


In 1858 or 1859 it was discovered that Leopold had inherited the disease haemophilia , sincethe disease is inherited in the female line, from his mother, Queen Victoria, the first instance of the haemophilia in the British royal house, it later occured with frequency in the queen's descendents. Victoria herself was puzzled by the emergence of the disease, given its absence in either family. New evidence has revealed that haemophilia may have been present in earlier generations of the family of Victoria of Saxe-Coburg-Saalfield, Queen Victoria's mother.

In the late nineteenth century, haemophilia was a devastating disease, Leopold was described as delicate child who remained a constant source of anxiety to the Queen throughout his life. As he grew older he became equally more prone to bruising, which was extremely painful, and his joints would lock when he fell, rendering him incapable of walking afterward for some time. Consequently, Leopold spent a lonely childhood, was often bedridden and was forbidden to play with his siblings or any other children. He is also believed to have suffered mildly from epilepsy, which later emerged again in the royal family in his great-nephew Prince John, the youngest son of George V and Mary of Teck.

Leopold inherited the considerable intellectual abilities of his father Albert, the Prince Consort, whose artistic tastes he shared. At the age of nineteen, he expresses a wish to be allowed to attend Oxford University. Queen Victoria, however, was reluctant to permit him,the queen feared for her son's delicate health, but eventually relented to Leopold's pleading, although she set severe restrictions on how he ought to behave whilst at university.

In 1872 he entered Christ Church at Oxford University where he studied a variety of subjects, living with his tutor at Wykeham House, St Giles's. Leopold became president of the Oxford University Chess Club and became friends with Lewis Carrol, Oscar Wilde and John Ruskin. He left the university with an honorary doctorate in civil law in 1876.

Leopold travelled in Europe and in 1880, toured Canada and the United States with his sister, Princess Louise, whose husband John Campbell, Marquess of Lorne was the Governor General of Canada. Denied the traditional career options open to his older brothers in the army and navy, due to his poor health, Leopold became a patron of the arts and literature, and a trustee of the British Museum. He served as an unofficial secretary to his mother. Prince Leopold was created Duke of Albany, Earl of Clarence and Baron Arklow by his mother the queen on 24 May 1881. 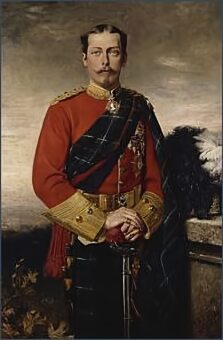 Queen Victoria constantly placed restrictions on her hemophiliac son , which he chaffed at. Feeling stifled by the queen's over protectiveness toward him and her wish to keep him at home, which he strongly resented, Leopold viewed marriage as his only hope of independence. Due to his his haemophilia, he had difficulty finding a wife. He considered his second cousin Princess Frederica of Hanover as a wife, but the two instead developed a lifelong friendship and became confidantes. Alice Liddell, the daughter of the vice-chancellor at Oxford and the subject of the book Alice in Wonderland, was also a prospect. He considered Victoria of Baden and Princess Karoline Mathilde of Schleswig-Holstein-Sonderburg-Augustenburg. 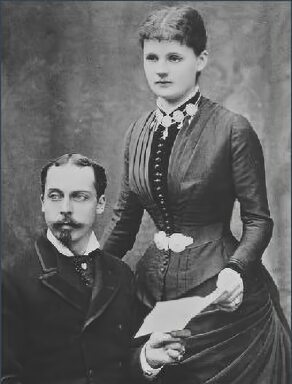 After several rejections, Victoria became involved to eliminate what she viewed as unsuitable possibilities. Victoria arranged a meeting with Princess Helene Friederike, the daughter of Georg Viktor, Prince of Waldeck-Pyrmont. Leopold and Helena were married on 27 April 1882 at St George's Chapel at Windsor Castle. In 1883, their first child a daughter, Alice, (christened Alice Mary Victoria Augusta Pauline) was born to the couple, followed by a son, Charles Edward (Charles Edward George Albert Leopold) born on 19 July 1884, who completed their family.

In February 1884, Leopold went to Cannes on the orders of his doctos, due to joint pain he suffered, a common symptom of haemophilia, he always found the English winter climate in England difficult. His wife, Helena, who was pregnant at the time, remained in England.

On 27 March, while staying at a friends Cannes residence, the 'Villa Nevada', Leopold slipped and fell on the staircase, injuring his knee and hitting his head. He died in the early hours of the next morning, at the age of but thirty one, apparently from a cerebral haemorrhage. He was buried in the Albert Memorial Chapel at Windsor.

His posthumous son, Prince Charles Edward, (Charles Edward George Albert Leopold) was born four months later, on 19 July 1884, and succeeded him as 2nd Duke of Albany upon birth . In 1900 Charles Edward succeeded his uncle Alfred, Duke of Edinburgh as the last reigning Duke of Saxe-Coburg and Gotha. During World War I, he fought on the German side and was therefore deprived of his British titles. Following World War II, he was imprisoned for holding Nazi sympathies and was heavily fined. Charles Edward's grandson, King Carl XVI Gustaf, is currently King of Sweden.

Helena, Duchess of Albany survived her husband by 38 years, dying in 1922. Leopold's daughter, Princess Alice of Albany married her second cousin once-removed, Prince Alexander of Teck, (the brother of Queen Mary, consort of George V) on 10 February 1904, at St George's Chapel, Windsor. The haemophilia gene is carried on the X chromosome, and is generally passed through female descent, Any daughter of a haemophiliac is therefore a carrier of the gene. Leopold's daughter Alice passed the haemophilia gene to her son Rupert Cambridge, Viscount Trematon, who like his grandfather, died of an intracerebral hemorrhage as a result of a car crash which occured in France on 15 April 1928.