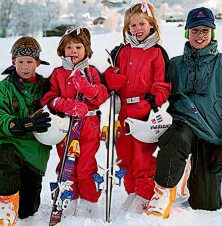 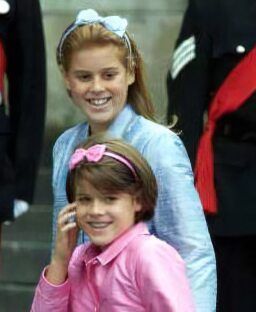 Princess Eugenie of York, the sixth grandchild of Queen Elizabeth II was born on 23rd March, 1990 at the Portland Hospital in London, the second daughter of Andrew, Duke of York and his ex-wife Sarah Ferguson, the daughter of Major Ronald Ferguson and Susan Mary Wright. The new arrival weighed 7lb 1.5 oz. She was introduced to an eager public for the first time on 30 March, 1990, when with her mother, she left the Portland Hospital.

Princess Eugenie was christened Eugenie Victoria Helena Mountbatten-Windsor at the Church of St. Mary Magdalene, Sandringham, by the Bishop of Norwich.

She was so named after Victoria Eugenie of Battenberg, the daughter of Princess Beatrice, the youngest daughter of Queen Victoria and Princess Helena, Victoria's third daughter. The Duchess of York was interested in the family of Queen Victoria, having previously written a book on the subject. Princess Eugenie was the first member of the royal family to have a public christening.

Following highly publicized rifts in their marriage, her parents the Duke and Duchess of York separated in April, 1992, when Eugenie was but two years old. They were divorced in 1996, since it was an amicable and civilized split and the couple remained friends, Eugenie and her sister Beatrice were largely unaffected by it.

Eugenie started her education at Upton House School at Windsor and continued at Coworth Park School, Windlesham, Surrey and Marlborough School in Wiltshire, and left the school with A-Level grades of A in art and English literature and B in history of art. Eugenie studied Combined Honours BA at Newcastle University in September 2009, combining Art History, English Literature and Politics. She completed her studies in 2012, earning a 2:1 in English literature and history of art. 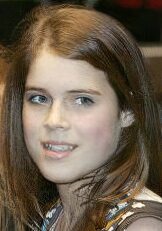 Prince Andrew describes his youngest daughter as " A bit of a tear away, she is an undoubted leader and has a maverick streak in her." While the Duchess of York has been recorded as saying " She is clever academically and she appears easy and light-hearted."

At twelve years old Princess Eugenie had to undergo back surgery at the Royal National Orthopaedic Hospital, London, to prevent her spinal curvature from worsening. Metal rods and eight one-inch screws were inserted, the operation was successful and it is not expected that she will have to have any further surgery to correct the condition.

Following the terrorist attacks on the World Trade Centre, Eugenie, accompanied by her elder sister Beatrice, laid flowers in memory of the victims at the Roosevelt memorial at the American Embassy in London. The princess has displayed an interest in charity work and has accompanied her mother, the Duchess of York, when carrying out charity engagements.

Princess Eugenie is said to like computer games, football and the colour purple, she loves playing tennis and skiing. Her favourite foods are hot dogs, corn on the cob and doughnuts. She lists her favourite TV shows as Lost and Desperate Housewives. In her free time Eugenie states that she enjoys photography and playing computer games. She has expressed a wish to study history of art at university in the future. She is at present sixth in the line of succession to the throne.

Princess Eugenie has set up her own blog - or internet diary - on which she discusses her life with the other Royals. She calls the Duke of York "the most supportive father I could wish for", while describing her mother as "wonderful" and sister Beatrice as "one of my best friends". Comparing herself and Beatrice Eugenie has stated "I like just throwing on a pair of jeans and generally being more understated. She is more , let's do the glamour. We're chalk and cheese" adding "We get on fantastically well, perhaps because we do and think different things. It's quite funny how, like most sisters, we sometimes fight about clothes. I always take her clothes back to school, for instance, which she hates. We had a screaming argument over a pair of Converse trainers that I took back, which she said were hers and I said were mine, and in the end I realised they were hers when I found mine behind the door. Like all sisters, we have silly arguments about unimportant stuff, but we do love each other to death."

On her grandmother the Queen, "Granny", Eugenie is effusive "Truly one of the most amazing women ever. She is also very funny. You can tell when she is happy, having all her family round at Christmas and watching them all laugh and having so much fun on Christmas Day. It just makes her very happy. All I can say is that she has this air of magic about her and she is incredibly wise. What doesn't she know?"