After the demise of Kenneth MacAlpin, his successors were generally accepted as the sole kings of Picts and Scots. Since the law of primogeniture had not yet been established in Scotland, Kenneth MacAlpin was succeeded by his brother, Donald, known as Domnall MacAlpin, a younger son of Alpin of Dalriada.

Born of a Pictish mother, he is described by chroniclers as the 'wanton son of a foreign woman. King Donald was inaugurated on the ancient Stone of Destiny at Scone. Like his brother before him, King Donald ruled his kingdom from Fortrenn. He consolidated the gains won by his older brother, and at Forteviot brought secular as well as ecclesiastical control under the emerging area of Scotia.

Donald established an ancient body of laws and rights in Scotland, known as the laws of Aodh, after their author, the Dalraida Scot of that name who died in 778. The Chronicles of Alba states that:-

" In his time the Gaels with their king made the rights and laws of the kingdom, [that are called the laws] of Á ed, Eochaid's son in Forteviot"

The Chronicle of Melrose records of Donald, "in war he was a vigorous soldier".

The King died after a short reign of only three years in 863, at his palace of Kinn Belachoir, although the Chronicle of Melrose states of Donald, "in war he was a vigorous soldier ... he is said to have been assassinated at Scone", No other source reports his death by violence. Donald's death is dated to 900 by the Annals of Ulster and the Chronicon Scotorum. He was buried at Iona Abbey. Donald I was never married and left no issue.

In accordance with the Tanist system of inheritance, Donald's nephew Constantine, the son of his brother, Kenneth I, was recognised by him as his successor.

Few clues have been left behind as to the ancient Pictish language, apart from a few Pictish inscriptions. They probably acquired their alphabet from the Dalraida Scots. Their mysterious artwork was particularly distinctive, the symbolism of which remains undeciphered by archaeologists, its meanings shrouded in the mists of time. 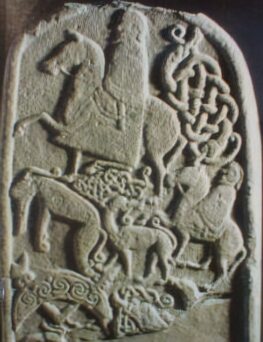