The Crown Jewels of Scotland 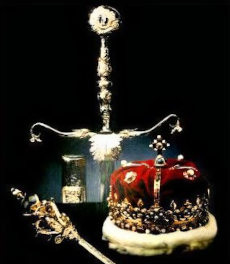 The Scottish Crown Jewels are referred to as the Honours of Scotland. They are the oldest surviving regalia in Britain and consist of a crown, a sword and a sceptre. The crown dates from 1540 and was made from Scottish gold melted down from a previous crown. It was first used when James V wore it for the coronation of his second Queen, Marie of Guise. It is encrusted with 20 precious stones and 22 gemstones, along with Scottish freshwater pearls. 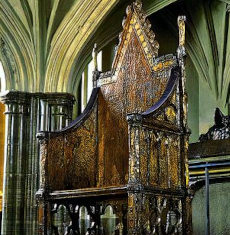 The Stone of Destiny, otherwise known as An Lia Fàil, or the Stone of Scone, revered for centuries as a holy relic, played a central role in the coronation of early Scottish kings, the plain block of sandstone has had a turbulent history, having been fought over, hidden and captured for over 700 years. John Balliol became the last king to use the Stone of Destiny in Scotland in 1292. During the Scottish Wars of Independence, the Stone was captured by Edward I of England 'the Hammer of the Scots' in 1296 and removed to Westminster Abbey. In 1996, the then British Conservative Government of John Major, with the approval of the Queen, decided that the Stone should be returned to Scotland when not in use at coronations. On St. Andrew's Day, 15th November 1996, it returned to Scotland. 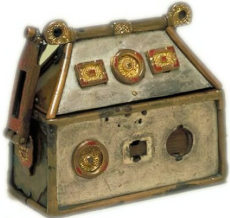 The Monymusk Reliquary belongs to a small group of early Christian house-shaped reliquaries. Reliquaries housed the precious relics of Christian saints, although the Monymusk Reliquary is now empty. The casket and lid are carved from a solid piece of wood, which was then covered in thin bronze and silver plates. It is characterised by a mixture of Pictish artistic designs and Irish artistic traditions fused with Anglo-Saxon metalworking techniques.