The Wallace Monument, a Victorian Gothic tower, was completed in 1869 after eight years' construction, the monument soars to 220 feet high and is visible from miles around. It is situated on Abbey Craig, a volcanic crag above Cambuskenneth Abbey, two miles north of Stirling.

The Monument was designed by architect John Thomas Rochead and paid for following a fundraising campaign, with expatriate Scots and international figures also contributing towards its construction, including Italian leader Giuseppe Garibaldi. It is said to have cost in excess of 18,000 pounds. 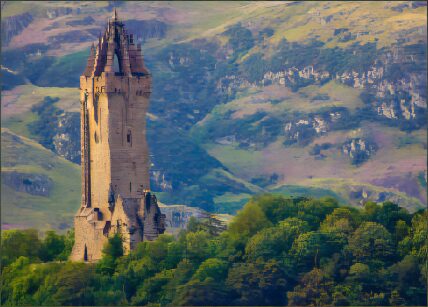 Legend states that it was from this prominent hilltop that in 1297 William Wallace, one of Scotland's most famous sons, is said to have watched the approach of the English army across Stirling Bridge before leading the Scots to victory in battle against them.

King Edward I of England, known as the 'Hammer of the Scots' invaded Scotland in 1296. William Wallace, the younger son of a Scottish knight and minor landowner, resisted him leading a guerrilla campaign against the English. He was described as 'a tall man with the body of a giant, cheerful in appearance with agreeable features, broad-shouldered and big-boned... pleasing in appearance but with a wild look.' Edward I ordered John de Warenne, Earl of Surrey, and Hugh de Cressingham, the English Treasurer of Scotland, to raise an army and crush the Scottish uprising. On 11th September, 1297, Wallace and Andrew Moray led the Scots in battle and defeated the English army at the Battle of Stirling Bridge.

The Sword of William Wallace 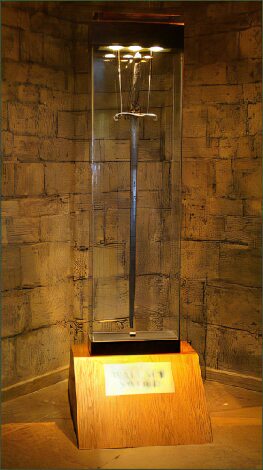 After suffering defeat at the Battle of Falkirk in 1298, Wallace was betrayed and captured. He was takenprisoner to England and after a trial conducted at Westminster Hall, he was hanged, drawn and quartered in London in 1305. For the Scots, William Wallace was an exemplar of unbending commitment to Scotland's independence who died a martyr to the cause.

The sandstone monument is open to the general public. A steep climb up the 246 step spiral staircase leads to the viewing gallery inside the monument's crown, which provides breathtaking views of the Ochil Hills and the Forth Valley.

Busts of Famous Scots in the Hall of Heroes 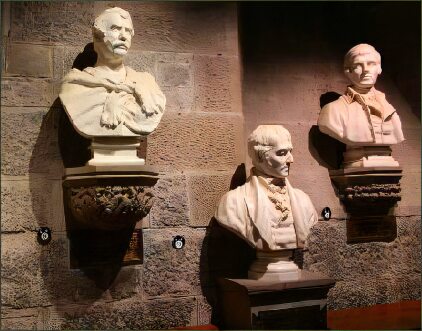 The interior contains a Hall of Heroes, with a series of marble busts of famous Scots, writers, explorers, inventors and statesmen including, Robert the Bruce, Sir Walter Scott, David Livingstone, Robert Burns and James Watt.

There is a 3D simulation in which Wallace appears at his trial at Westminster Hall, telling his own story before his brutal execution in London. On one of the levels inside the Monument, there is also a Diorama - an illustration of the geographical layout around the monument marked with important local landmarks and historical battlefields. The third floor of the monument contains the 'Building the Monument' Exhibition.

Several artefacts believed to have belonged to William Wallace are on display inside the monument, these include the Wallace Sword, a double-handed antique claymore measuring 1.63-metre (5 feet, 4 inches) long and weighing almost three kilograms, purported to have belonged to the Scottish freedom fighter. By its size, it has been estimated that to be able to wield the sword William Wallace must have stood more than six feet six inches tall.

The earliest record of a Wallace Sword dates from 1505 when Wallace had been dead for 200 years. The records of King James IV show that he paid the cost of a new hilt fitted to the sword and gave it a new scabbard, hilt and belt. Legend states that Wallace's original scabbard, hilt and belt were made from the dried skin of Hugh Cressingham, one of the English commanders at the Battle of Stirling Bridge. It was moved from Dumbarton Castle to the Wallace Monument in 1888