The Augustinian Abbey of Scone was situated under two miles to the north of the centre of Perth and was founded as Scone Priory, the date of its foundation is uncertain, although it is known to have been founded by King Alexander I between 1114 and 1122. The abbey was dedicated to the Holy Trinity and Saints Mary, Laurence, Augustine and Michael.

Scone priory was established by six canons from Nostell Priory in West Yorkshire, under the leadership of Prior Robert, later bishop of St Andrews. The foundation charter, dated 1120, was once thought to be a forgery but is now regarded as being of late twelfth-century origin, and was perhaps copied due to the fire which occurred there sometime before 1163 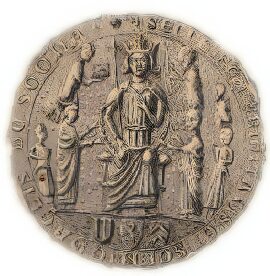 The Priory's status was raised to that of abbey during the reign of King Malcolm IV, in either 1163 or 1164. The abbey was an important venue for royal ceremonies, standing as it did adjacent to the Moot Hill, the coronation site of the ancient kings of Scotland, it housed the coronation stone, the Stone of Scone, until the abbey was raided and the Stone of Scone carried off to Westminster Abbey by King Edward I of England. who had it incorporated beneath the coronation throne of the Kings of England.

Robert the Bruce was crowned king of Scots at Scone in 1306. According to tradition, the ceremony of crowning the monarch of Scotland was performed by a representative of Clan MacDuff, but Isabella, Countess of Buchan, their representitive arrived in Scone the day after the coronation of the king in March 1306. However, the Bruce agreed to be crowned for a second time the day after, as otherwise the ceremony would be seen as irregular, not being performed by a MacDuff. Isabella was later imprisoned in a suspended cage for four years by Edward I for this offence.

Coronation of Robert the Bruce 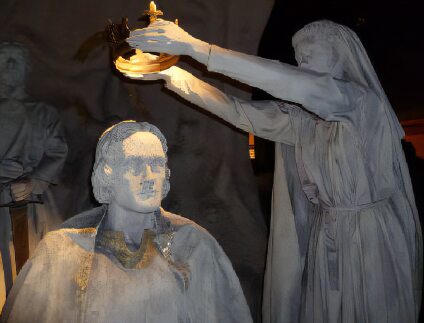 Scone Abbey was one of the chief residences of the Scottish kings. It is probable that the abbey buildings, now long since disappeared, overlapped the modern Scone Palace. The last coronation to take place at Scone was that of King Charles II when he accepted the Scots crown in 1651. James Francis Edward Stuart, the "The Old Pretender", visited Scone during the Jacobite uprising in 1716 but was forced to flee on hearing of Government troops in the area. His son, Charles Edward Stuart, better known as Bonnie Prince Charlie, also visited the site during the 1745 Jacobite uprising.

The abbey also held relics of St Fergus and was a popular place of pilgrimage in the middle ages. Following the reformation, Scottish abbeys disappeared as institutions. In 1559 Scone Abbey itself became a victim of a mob from Dundee and was largely destroyed. In 1580 the abbey estates were granted to Lord Ruthven, later the Earl of Gowrie, who held estates around what is now called Huntingtower Castle. The Ruthvens rebuilt the Abbot's Palace of the old abbey as a grand residence.

The precise location of the abbey had long remained a mystery, but in 2007 archaeologists pinpointed the location using magnetic resonance imaging technology, which revealed the structure to have been somewhat larger than had been imagined. A stylised illustration of the Abbey on one of its seals suggests that it was a major Romanesque building, with a central tower crowned with a spire. In 2008 an archaeological dig at the Abbey revealed burials with three complete human skeletons.