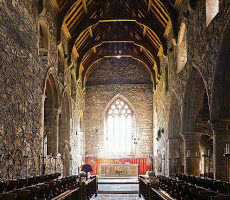 Iona Abbey, one of Scotland's most sacred sites and the symbolic centre of Scottish Christianity was the mausoleum of many of the early Scottish Kings. Situated on the Isle of Iona on the West Coast of Scotland, the abbey is one of the oldest and most important religious centres in Western Europe. The abbey was a focal point for the spread of Christianity throughout Scotland and marks the foundation of a monastic community by St. Columba, when Iona formed part of the Kingdom of Dál Riata. 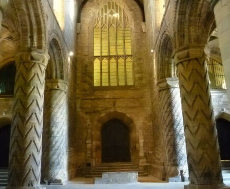 The abbey of Dunfermline was founded in 1128 by King David I of Scotland, but the monastic establishment was based on an earlier priory which dated back to the eleventh century and was established during the reign of his parents Malcolm Canmore and his pious Saxon queen St. Margaret. 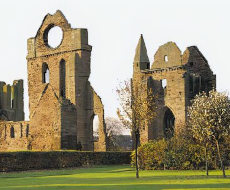 Arbroath Abbey was founded in 1178 by William the Lion, King of Scots, for a group of Tironensian Benedictine monks from Kelso Abbey. It was consecrated in 1197 with a dedication to the martyred Saint Thomas Becket, whom William had met and admired during his time at the English court. William was buried before the high altar of the church in 1214. 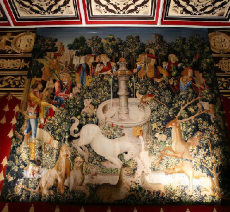 One of Scotland's grandest castles, Stirling Castle perches dramatically on the crag of Castle Hill at Stirling, an extinct volcano, towering 250 feet above the plain below,with steep cliffs on three sides. Stirling's importance developed from the fact that it controlled the lowest crossing point of the River Forth. The earliest recorded castle at Stirling was used by King Malcolm III Canmore in the eleventh century. 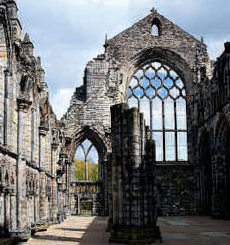 Holyrood Abbey in Edinburgh was founded in 1128, by the pious King David I Scotland (1124-53). Its name derives from a relic that was granted to the abbey, which had once belonged to the Saxon born St. Margaret, wife of Malcolm Canmore and David's mother. Holyrood became a favoured royal residence of the Stewart kings of Scotland. King James IV (1488-1513) replaced the Medieval royal apartments for himself and his bride, Margaret Tudor, the sister of Henry VIII. Only a small part of the gatehouse of these buildings survives to the present. His son and successor, James V (1513-42) embarked upon an extensive building programme at Holyrood. 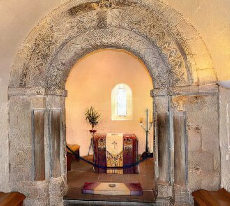 Edinburgh Castle perches dramatically on the craggy volcanic Castle Rock and dominates the Edinburgh skyline. The earliest recorded mention of Castle Rock is recorded in the 2nd century, when the mathematician and geographer, Ptolemy (c. 83 - c. 168) makes reference to a settlement of the Votadini tribe which was known to the Romans as 'Alauna', which means 'rock place'. The castle disappears from records from the time and is lost in the mists of time of Ptolemy until around 600AD, when it is mentioned in the Brythonic epic Y Gododdin, which refers to Din Eidyn, "the stronghold of Eidyn". The first recorded mention of the castle on the rock appears in the Scottish chronicler John of Fordun, writing in the fourteenth century, provides an account of the death of Malcolm III, when Malcolm's widow, the ailing Saint Margaret, learns of his death at the 'Castle of Maidens' in November 1093. 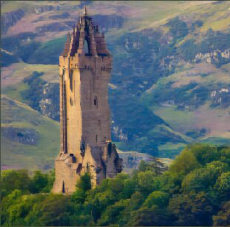 The Wallace Monument, a Victorian Gothic tower, was completed in 1869 after eight years' construction, the monument soars to 220 feet high and is visible from miles around. It is situated on Abbey Craig, a volcanic crag above Cambuskenneth Abbey, two miles north of Stirling. Legend states that it was from this prominent hilltop that in 1297 William Wallace, one of Scotland's most famous sons, is said to have watched the approach of the English army across Stirling Bridge before leading the Scots to victory in battle against them. 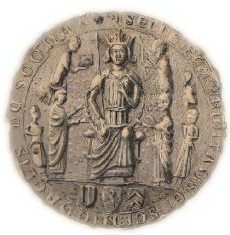 The Augustinian Abbey of Scone was situated under two miles to the north of the centre of Perth and was founded as Scone Priory, the date of its foundation is uncertain, although it is known to have been founded by King Alexander I between 1114 and 1122. The Abbey was one of the chief residences of the Scottish kings. It is probable that the abbey buildings, now long since disappeared, overlapped the modern Scone Palace. The last coronation to take place at Scone was that of King Charles II, when he accepted the Scots crown in 1651. 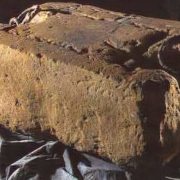