The abbey of Dunfermline was founded in 1128 by King David I of Scotland, but the monastic establishment was based on an earlier priory that dated back to the eleventh century and was established during the reign of his parents Malcolm Canmore and his pious Saxon queen St. Margaret. 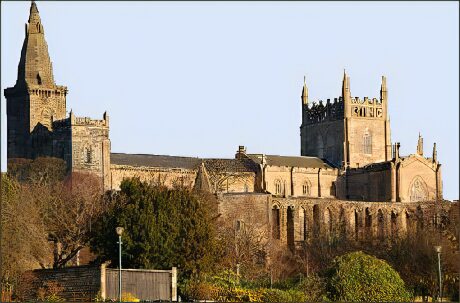 Saint Margaret of Scotland was buried, according to her wishes, at Dunfermline Abbey in 1093. Following her Canonization on 19 June 1250, On 19th June 1250, Margaret's body and that of her spouse, Malcolm III, were exhumed and removed to a magnificent shrine, in a new chapel dedicated to St Margaret which was completed in the middle of the thirteenth century. 19th June was thereafter celebrated in Scotland as the feast of St. Margaret.

Her remains, along with those of her husband, were not allowed to rest in peace howeve, in 1560 St. Margaret's shrine was desecrated by Scots Calvinist iconoclasts. Mary, Queen of Scots had St. Margaret's head removed as a reliquary to Edinburgh Castle, as she hoped to call on the assistance of the saint in childbirth. In 1597 Margaret's earthly peregrinations continued, when her head was taken home by a pivate gentleman, it then embarked upon further journeyings, arriving in Antwerp and finally reaching the Scot's College at Douai, France. It disappeared completely during the French Revolution. Phillip II of Spain had the remains of Margaret and Malcolm Canmore translated to a shrine at El Escorial, seat of the Catholic Kings of Spain.

The mother of William Wallace is said to be buried in the Abbey churchyard, a thorn tree now bears a plaque to commemorate this event. Wallace himself is reputed to have hidden from English soldiers in one of the caves in the abbey's park, now known as Wallace's Well. 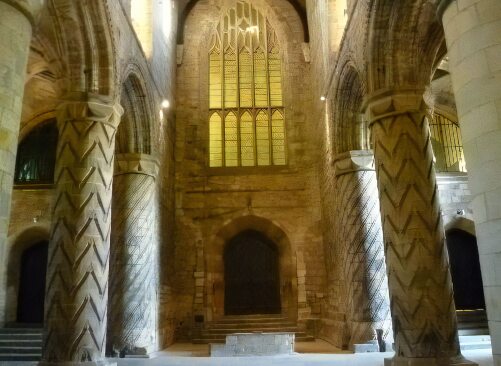 King Edward I of England held his court in the abbey during the winter of 1303 when he left the next year most of the buildings were burned and subsequently had to be rebuilt. This work was undertaken by King Robert the Bruce who is said to have added the royal palace.

Robert the Bruce was buried in Abbey's choir in 1329, in the choir, which is now the site of the present parish church. Most of Robert's tomb was destroyed during the Scottish Reformation, but on 17th February 1818, workmen employed to build a new parish church on the site of the eastern choir of Dunfermline Abbey discovered a tomb before the site of the high altar of the former abbey.

The tomb was covered by two large stones, a headstone and a larger stone measuring around six feet (182 cm) in length. On removing the stones, they uncovered the remains of an oak coffin containing a skeleton enclosed in two layers of lead, covered by a shroud of cloth of gold. The sternum (breastbone) of the skeleton had been split open and the skull wore a lead crown. In the debris around the grave, fragments of black and white marble were found, which were linked to Robert the Bruce's recorded the purchase of a marble sarcophagus.

Tomb of Robert the Bruce 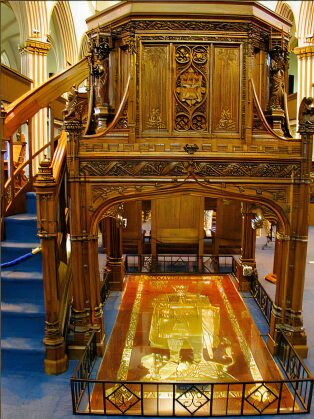 The remains were taken from the coffin and, together with the deteriorating lead shroud, were inspected by James Gregory and Alexander Monro, Professor of Anatomy at the University of Edinburgh. The skeleton was attributed to Robert I on the basis of the sawn sternum, a procedure carried out after death to remove his heart in accordance to Robert's wish to have it carried by Sir James Douglas on Crusade.

The bones were measured and drawn, and a plaster cast was taken of the skull by artist William Scoular. The cast confirmed that Robert suffered the loss of his upper incisors and associated alveolar maxillary bone. These features have been interpreted by V. Moller-Christiansen and R.G. Inkster, authorities on the osteological appearance of leprosy, as typical of leprosy. Robert the Bruce's skeleton was measured to be 5 feet 11 inches (180 cm). It was estimated that he probably would have stood at around 6 feet 1 inch (186 cm) tall as a young man, almost as tall as King Edward I of England ( who was 6 feet 2 inches tall 188 cm).

Robert the Bruce's remains were re-interred in Dunfermline Abbey on 5 November 1819 in a new lead coffin. Professor Sue Black and her team of forensic anthropologists from Dundee recreated his face from the cast made of his skull. In 1891 the pulpit was moved back and a monumental brass inserted in the floor to indicate the royal vault.

During the Scottish Reformation, the abbey church was sacked in March 1560. The guest house, which had always been a royal residence, continued to be used and modifications were made to it throughout the sixteenth century. It was reconstructed as a palace between 1590-1600 for Anne of Denmark, wife of James VI and I. The abbey was the birthplace, in 1600, of James' second son, Charles I, the last monarch born in Scotland. 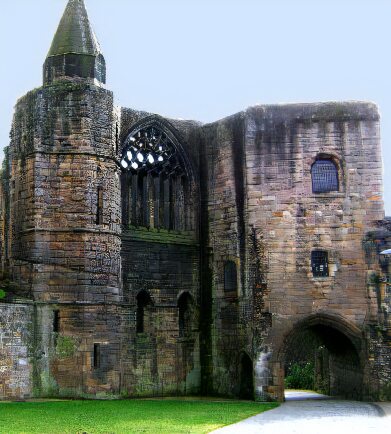 Some parts of the abbey infrastructure remain, mainly the vast refectory and rooms over the gatehouse which formed part of the former city wall. The nave was also survived and was repaired in 1570. It served as the parish church until the nineteenth century, and now forms the vestibule of a new church. This edifice, in the Perpendicular style, opened for public worship in 1821, occupies the site of the ancient chancel and transepts, though differing in style and proportions from the original structure.

Next to the abbey stands the ruin of Dunfermline Palace, also part of the original abbey complex and connected to it via the gatehouse. Dunfermline Abbey, one of Scotland's most important cultural sites, has been the burial place of more of Scotland's royalty than any other place in the kingdom, except for Iona Abbey. Those interred at Dunfermline include King Duncan II, King Edgar, King Alexander I and King David I. King Malcolm IV, King Alexander III, Queen Annabella, Robert the Bruce's wife, Queen Elizabeth, their daughter Matilda and his sister, Christian were also buried at Dunfermline.

The Abbey which survives today consists of the twelfth-century nave with western gables and towers which were rebuilt in the early fifteenth century. The north tower is considerably larger than the south and has a spire above a corbelled parapet, while the south tower has a flat roof with a crenellated parapet.

The west door is the original Norman porch with a sloping canopy. Each tower has a pointed arch window with intersecting tracery at the lower stages. A similar window is above the main door, and above this is a blind mullioned and transomed oculus. At the apex of the gable is an arcade of four lights.