David I was born circa 1080 at Dunfermline, the youngest son of Malcolm Canmore and St. Margaret. David's father and eldest brother Edward were killed at Alnwick Castle in 1093, whilst launching an invasion of Northumberland. His mother died a few days later. David, along with his brothers Edgar and Alexander were present at their mother's death at Edinburgh Castle, whilst being besieged by their paternal uncle, Donald Bain in alliance with his other brother, Edmund.

David was sent to England to join his sisters, Edith and Mary when he was nine years old. His sister Edith was to become Queen of England through her marriage to King Henry I, while Mary was to marry Eustace of Boulogne and became the mother of King Stephen's Queen, Matilda of Boulogne.

Malcolm III and David I 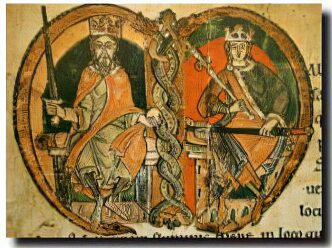 David spent over thirty years of his life in England, he was married to a Norman heiress Maud of Huntingdon, daughter of Waltheof, Earl of Northampton and in her right became Earl of Huntingdon, the marriage produced two sons, Malcolm and Henry.

On the death of his elder brother King Edgar, David was given the title Earl of Cumberland and made virtual ruler of southern Scotland. He succeeded as King of Scots in 1124 on the death of his brother Alexander I.

David was destined to become the most remarkable and memorable of the sons of Malcolm Canmore. On returning to his kingdom, the new King distributed estates amongst his Norman associates, the families of de Bruce, de Comines, de Balliol and Fitz Alan (who were to be the ancestors of the Stewart dynasty) established a new French-speaking Anglo-Norman aristocracy, who were eventually to intermarry with the old Celtic nobility.

Following the example set by his saintly mother, the pious David founded many new bishoprics and abbeys including Melrose, Kelso and Jedburgh and endowed many of the monasteries. He supported the Scottish Bis

King David I built St. Margaret's Chapel at Edinburgh Castle on the spot where his mother died in 1093. The Chapel is the oldest building to survive in the Castle to the present day. 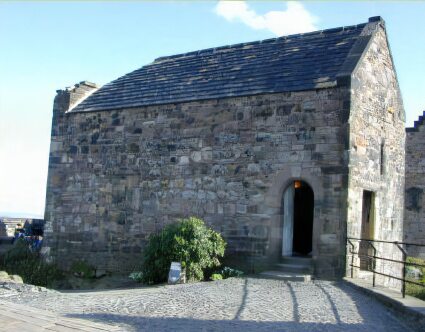 William of Malmesbury recorded of David that he was more courtly than his two brothers who had reigned before him 'polished from boyhood by familiarity with us which had rubbed off all the rust of Scottish barbarism. He remitted three years taxation for those who improved their houses, their dress and table manners. No three royal brothers were ever so holy or so chaste.'

England at this time was rent by civil war as Stephen, the nephew of Henry I and Henry's daughter Matilda, who was also David's niece faced each other in a bloody and bitter struggle for the throne. In 1135, the King of Scots decided to support his niece, which provided him with an excuse to invade England. The Scots were defeated at the The Battle of The Standard, near Northallerton, in 1138. David joined Matilda in London in 1151 and accompanied her to Winchester, where he was almost captured by Stephen's forces. As a result of the negotiations which followed, Stephen recognised Scotland's independence and ceded the greater part of Northumbria to David. He later knighted Matilda's sixteen-year-old son, the future Henry II, the first of the Plantagenets.

King David, I died on 24th May 1153 at Carlisle and was buried at Dunfermline Abbey. He could fairly be described as one of the ablest of his dynasty. Since his only son, Henry, Earl of Northumberland had predeceased him, David was succeeded by his grandson, Malcolm IV.

Alexander I PreviousNext Maud of Huntingdon