Maud of Huntingdon, Queen of Scotland

Maud of Huntingdon was the daughter of Waltheof, Earl of Huntingdon and Northampton. The last of the Anglo-Saxon earls to remain powerful after the Norman conquest of England in 1066, Waltheof was the son of Siward the Strong, Earl of Northumbria. Waltheof had taken a Norman wife, Judith of Lens, daughter of Lambert II, Count of Lens and William the Conqueror's sister Adelaide of Normandy, Countess of Aumale.

Earl Waltheof had joined the Revolt of the Earls against William in 1075 but his wife Judith had betrayed Waltheof to her uncle, Waltheof was beheaded on 31 May 1076. Following the execution of her husband, Judith was betrothed by William to Simon I of St. Liz, 1st Earl of Northampton but refused to marry Simon and fled the country. In around 1090, Simon of St. Liz was married to Judith's daughter, Maud. They had three children:-

Waltheof, Earl of Huntingdon and Northampton

Maud of Huntingdon, Queen of Scotland 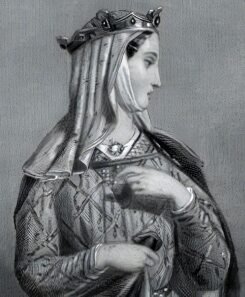 After the death of Simon I of St. Liz, King Henry I arranged for her to marry his brother-in-law, David of Scotland in 1113, the youngest son of Malcolm Canmore and St. Margaret.

David had been sent to England to join his sisters, Edith and Mary when he was but nine years old. His sister Edith was to become Queen of England through her marriage to King Henry I, while Mary was to marry Eustace of Boulogne and became the mother of King Stephen's Queen, Matilda of Boulogne.

Through his marriage to Maud of Huntingdon, David acquired control over his wife's vast estates in England, in addition to his own lands in Cumbria and Strathclyde. David spent over thirty years of his life in England.

The marriage of Maud and David produced four children:-

David succeeded his brother Alexander I to the Scottish throne in 1124. Maud died in 1030/31 and was buried at Scone Abbey in Perthshire.

On the death of Henry of Scotland, her eldest son by David, the Earldom passed to his half-brother Simon II of St Liz. Simon fought for King Stephen during the English civil war known as the Anarchy, he was aware that if the Empress Matilda won, his earldom of Northampton would be taken by his nephew, David of Scotland. He died in 1153 just prior to the accession to the English throne of Matilda's son, Henry II.