Henry I was the fourth son of William the Conqueror and Matilda of Flanders and was born between May, 1068 and May, 1069 probably at Selby in Yorkshire. He was named Henry after his mother's maternal uncle, King Henry I of France. On the death of his father, Normandy was bequeathed to his eldest son, Robert Curthose , England was left to the third son, William Rufus (a second son, Richard, had been killed whilst hunting in the New Forest) and to the youngest, Henry, he left a large sum of money.

Henry I of England 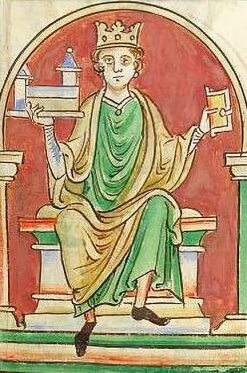 Henry seized England's crown on the death of his brother, William Rufus on 2 August 1100. He had been present on the hunting expedition in the New Forest which resulted in Rufus' death, either by accident or design and left abruptly and in indecent haste to seize the treasury at Winchester. The finger of suspicion has been pointed at Henry of complicity in his brother's death, Rufus was at the time refusing to sanction Henry's plans to marry the (half Saxon) Scottish Princess Edith.

Henry I was crowned at Westminster on 1st August, 1100 and granted a popular coronation charter, promising to reform the abuses of his brother's reign. He imprisoned the despised Ranulf Flambard, Rufus' chief justiciar, thereby evoking the popular support of the English people. 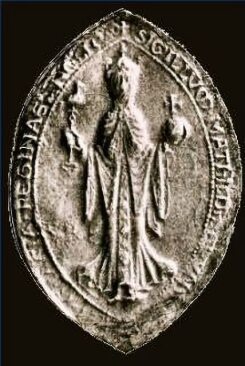 Unlike Rufus, Henry had been born in England, which endeared him to the Saxon people. The historian William of Malmesbury leaves us with a contemporary description:-

'He was of middle stature, his hair was black, but scanty near the forehead; his eyes were mildly bright, his chest brawny, his body well fleshed. He was facetious in proper season, nor did multiplicity of business cause him to be less pleasant when he mixed in society. Not prone to personal combat, he verified the saying of Scipio Africanus, 'My mother bore me a commander, not a soldier;' wherefore he was inferior in wisdom to no king of modern time; and I may also say, he clearly surpassed all his predecessors in England and preferred contending by counsel, rather than by the sword. If he could he conquered without bloodshed; if it was unavoidable, with as little as possible.'

Henry was well educated and able to read and write in English and Latin, from which was coined his nick-name 'Beauclerc, which was bestowed on him in the fourteenth century. 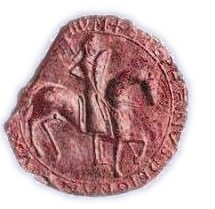 By his marriage to Edith of Scotland Henry further cemented his popularity, particularly among the Saxons, by marrying Edith of Scotland, the daughter of Malcolm Canmore, King of Scots and the Saxon St. Margaret (the sister of Edgar Atheling, of the Saxon Royal House) Edith, or Matilda, as she came to be known after her marriage, proved to be a good and a much respected Queen.

Following the example of her saintly mother, Edith devoted herself to good causes and often washed the feet of the poor. Though Henry was seldom faithful to his Queen, their's was generally considered a good and happy marriage by royal standards and helped to unite the rival claims of the Norman and Saxon houses. Henry invited the much respected Anselm to return to England, a popular move, he had learned from the mistakes of Rufus and was determined not to repeat them.

Henry I, proved to be a serial adulterer and begat more illegitimate children than any other English King, in all he fathered twenty bastards, by a continuous string of mistresses. One of these was the beautiful Nesta, Princess of Wales, who became the mother of the King's son, Henry. By far the most famous of Henry's illegitimate offspring was Robert of Caen, later created Earl of Gloucester, he was born in 1090, by a Norman mother, before Henry came to the English throne and was later to play a leading part on the stage of English history. Sybil, his daughter by Sybil Corbet, who was born in the 1090s was married to Alexander 'the Fierce', King of Scots, the brother of Henry's Queen, Edith.

The Conquest of Normandy

Ranulf Flambard, imprisoned in the Tower of London, affected a daring escape and joined Robert Curthose in Normandy in 1101. Robert, being the elder brother, considered England to be his just inheritance and war broke out over the issue. Robert invaded England on his return from the First Crusade, he landed at Portsmouth on 20 July 1101, with a small force of a few hundred men, where he was joined by several Anglo-Norman barons including Robert of Bellême and William de Warenne, Earl of Surrey. The brothers met at Alton in Hampshire where an agreement was finally reached between them, by the terms of the Treaty of Alton, Robert renounced his claims to England, while in return Henry renounced his claims in Normandy (with the exception of Domfront) and agreed to pay Robert a pension. 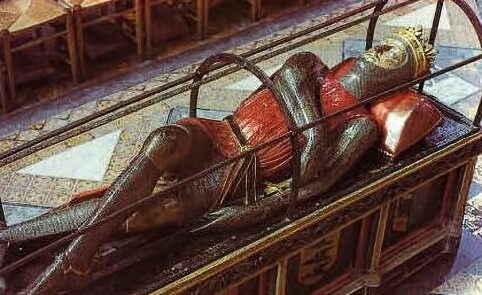 Regardless of the treaty, Henry began to inflicting penalties on those barons who had acted against him during his brother's invasion. William de Warenne, Earl of Surrey, was accused of fresh crimes, which were not covered by the Alton amnesty, and was banished from England. In 1102 Henry acted against the most powerful of his barons, Robert of Bellême and his brothers. Bellême escaped and rose up against Henry, who besieged his castles at Arundel, Tickhill and Shrewsbury, and proceeded to attack Bridgnorth. Bellême was banished from England and left for his estates in Normandy.

Henry later led an English army into Normandy which he took from his feckless brother at the Battle of Tinchebray which was probably fought on 28 September 1106. The Saxons felt that fifty years later, the humiliation of Hastings had been truly avenged. Robert was held prisoner by his brother for the rest of his life and died in captivity at the age of eighty.

Henry I, destroyed the power of the tyrannical Robert of Belleme. He set up a regular system of administration, ably aided by his minister Roger of Salisbury, who commended himself to the King by the speed he could get through mass. Henry clashed with Anselm over the rights of the church but eventually came to an agreement with him.

The Tragedy of the White Ship

Although he had many illegitimate children, Henry had only two children by his wife, Edith. A son, William, known as the Atheling, for his descent from the ancient Saxon Royal House, and a daughter Matilda, or Maud, who had been married in political alliance to the Holy Roman Emperor, Henry V, in childhood. She had spent most of her life in Germany. 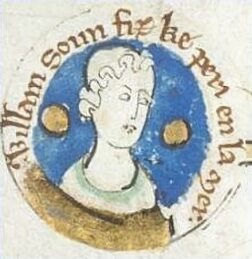 Tragedy struck when Henry's only remaining legitimate son, William, on returning from a campaign in Normandy, was drowned in the English Channel in the wreck of the White Ship. William had got away in a lifeboat but went back for his illegitimate sister, the Countess of Perche when his boat was overturned. Henry was overcome with immense grief.

In the hope of begetting another male heir to secure the succession, the King married for a second time to the young and beautiful Adelicia of Louvain, but the marriage produced no issue. After the death of her husband the Emperor, he recalled his daughter, now known as the Empress, to England. He named her his heiress and made the barons swear fealty to her.

The proud and haughty Matilda was ordered reluctantly into a marriage with the fifteen-year-old Geoffrey Plantagenet, son of the Count of Anjou, whom she loathed, a dislike which was reciprocated in full measure by her intended spouse. The marriage made an ally of Henry's erst while enemy, Fulk of Anjou. When the reluctant and quarrelsome pair was finally ordered by Henry I to do their duty and produce an heir to his throne, a son, the future Henry II, was born. Henry rejoiced that his dynasty was now secure and crossed to Normandy to see his new grandson, namesake and heir. The old king was said to have doted on the child. 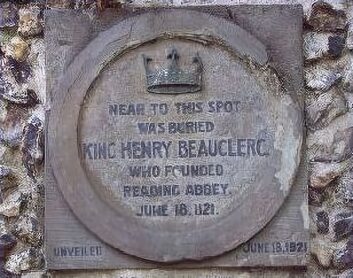 The Death of Henry I

In 1135, Henry again crossed to Normandy to see his two grandsons, Henry and his younger brother, Geoffrey, in whom the ageing king took great delight, dandling the young Henry on his knee.

During his visit, he quarrelled violently with the overbearing Matilda and her husband. Henry was now an ageing lion, these quarrels with his daughter affected him badly and he died in Normandy on 1st December 1135 at St. Denis le Fermont, from food poisoning, due to overindulging of his favourite dish of lampreys, which his doctors had forbidden him.

His body was returned to England and was buried at Reading Abbey. The Abbey was destroyed during the Reformation. No trace of Henry's tomb has survived. Nearby a small plaque and a large memorial cross has been erected in the adjoining Forbury Gardens. A team which includes Philippa Langley, who led the search for King Richard III's remains, and husband and wife historians John and Lindsay Mullaney is spearheading a project to uncover the full extent of the abbey using radar to find out where Henry I's remains may be, they possibly lie a playground or a car park. The project has won the support of Historic England, the public body, which has agreed to lend conservation expertise and help with cutting-edge geophysical research.

After Henry's death, despite his oath of allegiance, the throne was seized by his nephew Stephen. Nineteen years of Civil War known as 'the Anarchy' was to follow as Stephen and Matilda became locked in a bitter struggle for possession of the crown. In 1153, a compromise was reached in the Treaty of Wallingford. By its terms, Stephen was to retain the crown for the remainder of his lifetime, whereupon it would revert to Matilda's son, Henry and his heirs.

King Stephen died of apoplexy, the following year and was succeeded by Henry's grandson, Henry II, who became the first of the great Plantagenet dynasty.

The Ancestry of Henry I

William I 'the Conqueror

Robert the Devil Duke of Normandy

The Children of Henry I

Although he had four children by his wife, Edith of Scotland, Henry I had more illegitimate children than any other British monarch, numbering twenty-four in all:-

Henry had at least another three illegitimate daughters whose names have gone unrecorded.