The Bloody Tower, one of the 21 towers which, together, form the Tower of London complex, was built in the early 1220s during the reign of King Henry III. The Chief Architect and Master Builder of the tower were Henry de Reyns together with John of Gloucester and Robert of Beverley. The Bloody Tower was intended to control the main river entrance to the Tower of London, after 1280 the construction of the outer defensive wall left this tower landlocked. It then became the principal access from the inner to the outer ward with the lower chamber containing superior lodgings. The Bloody Tower was originally named the Garden Tower as its upper storey opens on that part of the parade ground which was formerly the Constable's Garden. The upper chamber was largely rebuilt during the reign of King Edward III. 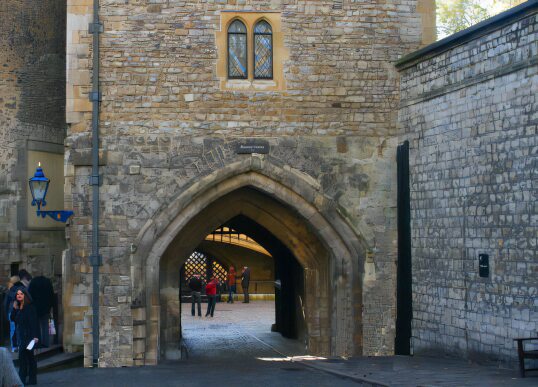 The Bloody Tower is infamous due to the mysterious murder of the two young Princes in the Tower Edward V and his brother, Richard Duke of York, which is traditionally believed to have taken place there. The thirteen year old Edward V's uncle, Richard Duke of Gloucester, was declared Lord Protector in 1483, Edward was confined to the Tower of London along with his younger brother Richard, while Gloucester was proclaimed King Richard III The two Yorkist princes were last seen in alive in June 1483, and it has traditionally been believed that the most likely reason for their disappearance is that they were murdered late in the summer of 1483. Dispute has raged ever since with regard to the fate of Edward V and his brother. The traditionalists believe that they were killed on their uncle Richard's orders. While the revisionists argue that Richard was cast into the role of villain by Tudor propaganda and that his successor, Henry VII, or Buckingham, had equal cause to remove the two boys, as they stood as much in their path to the throne as they did in Richard's. 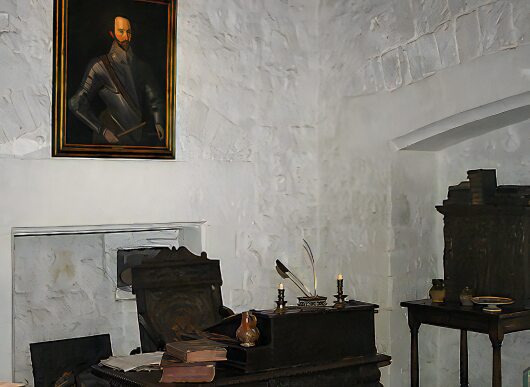 Bones thought to belong to those of the princes were discovered in 1674 when a staircase leading to the White Tower was demolished. The bones were later removed to the Henry VII Chapel at Westminster Abbey at the command of Charles II. Richard III was defeated at the Battle of Bosworth Field in 1485 by the Lancastrian Henry Tudor, who ascended to the throne as King Henry VII.

According to legend, the Bloody Tower is haunted by the ghosts of the two princes. Guards in the late fifteenth century reported that passing the Bloody Tower, they sighted the shadows of two small figures gliding down the stairs still wearing the white nightshirts they had on the night they disappeared. They were said to stand silently, hand in hand, before fading back into the stones of the Bloody Tower.

The display in the Upper Chamber of the Bloody Tower 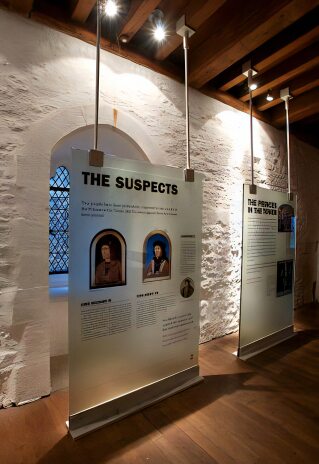 The Bloody Tower is believed to derive its present name from the suicide of Henry Percy, 8th Earl of Northumberland, within its walls, in 1585. Percy was buried in the church of St. Peter ad Vincula, within the Tower.

In the Stuart era, the renowned Elizabethan seaman and courtier, Sir Walter Raleigh was imprisoned in the Bloody Tower by James I. While captive there, Raleigh passed the time by writing his History of the World, which was published in 1614, four years before he was beheaded. Raleigh was assigned two rooms on the second floor of the Bloody Tower and lived there for thirteen years. Raleigh was beheaded in the Old Palace Yard at the Palace of Westminster on 29 October 1618. "Let us dispatch", he is reported to have said to his executioner. "At this hour my ague comes upon me. I would not have my enemies think I quaked from fear." After he was allowed to see the axe that would behead him, he remarked "This is a sharp Medicine, but it is a Physician for all diseases and miseries." 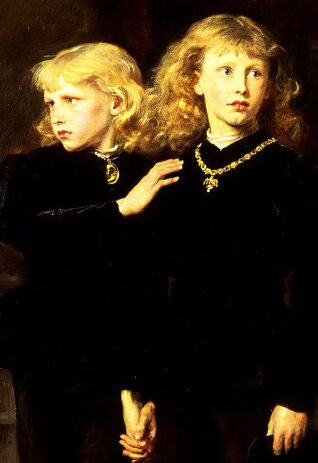 Others who suffered imprisonment or death in the Bloody Tower included, the Tudor Archbishop Cranmer, Bishops Ridley and Latimer, Protestant martyrs who were condemned to death for heresy, they were later burned at the stake at Oxford in 1556 on the orders of the Catholic Queen Mary I. Hugh Latimer and Nicholas Ridley were tied to the same stake and consumed by the same fire. When the executioner was preparing the wood under Ridley's feet Latimer turned to him and said, "Be of good comfort, Dr. Ridley, and play the man. We shall this day light such a candle by God's grace in England, as I trust never shall be put out".

Thomas Cranmer was the Archbishop of Canterbury under King Henry VIII. He supported King Henry's divorce from Katharine of Aragon, Queen Mary's mother. Queen Mary ordered Cranmer to return to the Catholic faith, Cranmer submitted to his queen despite his religious convictions. Mary did not believe that Cranmer's submission was sincere and sentenced him to share Latimer and Ridley's fate and be burned at the stake. Cranmer took back his letter of submission to the Queen and insisted he died in the Protestant faith announcing "I have sinned, in that I signed with my hand what I did not believe with my heart. When the flames are lit, this hand shall be the first to burn". When the fire was lit around his legs Cranmer leaned down and forced his right hand into the flames. He held it there, unflinching until it burned down to a stump. Before slumping into the flames he said, "This hand hath offended...Lord Jesus, receive my spirit."

The portcullis in the Bloody Tower 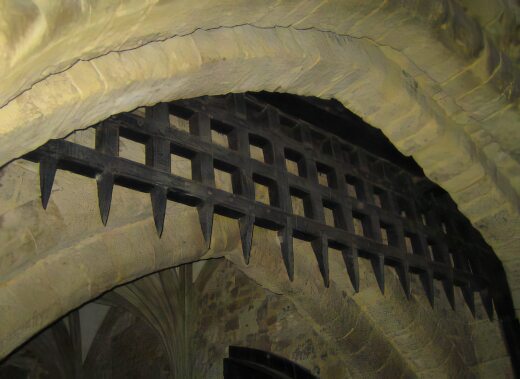 Sir Thomas Overbury, poet and courtier, was poisoned there in 1613. Overbury, a close friend and advisor of James I's favourite, Robert Carr, was arrested for refusing to undertake a diplomatic mission. In what was to become a major scandal at the time, he was poisoned in the Bloody Tower. Carr and his wife Frances Howard were later tried and convicted of complicity in the murder. Both were sentenced to death, but both were spared by the king and remained prisoners in the Tower until their release early in 1622.

Hanging Judge Jeffreys died in the Bloody Tower in 1688, he had sentenced 320 at the 'Bloody Assizes' to be executed or transported to the Penal colonies, in the aftermath of the Battle of Sedgemoor, which ended the Monmouth Rebellion in England. During the Glorious Revolution, when King James II was forced to flee the country, Jeffreys stayed in London until the last moment, when William III's troops approached London, Jeffreys tried to flee and follow the King abroad. He was captured in a public house in Wapping, disguised as a sailor but was recognized by a surviving judicial victim. Jeffreys was in terror of the public when dragged to the Lord Mayor and then to prison "for his own safety". He begged his captors for protection from the mob. He died of kidney disease while in custody in the Tower on 18 April 1689. He was originally buried in the Chapel of Saint Peter ad Vincula in the Tower. In 1692 his body was moved to St Mary Aldermanbury.

The Tower in the Stuart Era PreviousNext The White Tower