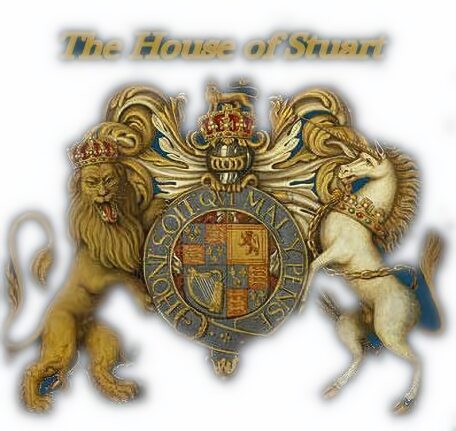 The Stuarts, that highly romantic but luckless dynasty, succeeded to the English throne on the death of the childless Tudor Queen Elizabeth I in 1603, in the person of James I and VI (1603-1625), son of Mary Queen of Scots and Henry Stuart, Lord Darnley, who became the first joint ruler of the kingdoms of both England and Scotland. The spelling of the ancient Scottish dynasty of Stewart was changed by Mary, Queen of Scots, during her long residence in France.

The earliest recorded member of the Scottish House of Stewart was Flaald I, who was of Breton origins and was employed in the serice of the eleventh century Lord of Dol and Combourg. Flaald and his immediate descendants held the hereditary and honorary post of Dapifer, or food bearer in the Lord of Dol's household.

The Stuart claim to England's throne derived from Margaret Tudor, eldest daughter of Henry VII, who married James IV. King of Scots. James I's successor Charles I (1625-49) was executed on the orders of Parliament, when England was declared a republic.

The monarchy was restored in 1660 when his son, the previously exiled Charles II (1660-85), was invited to return. Charles, or the 'Merry Monarch' as he is otherwise known, is famous for his many mistresses and his long liason with the actress Nell Gwyn. On the death of his niece, Queen Anne in 1714 the Stuart dynasty was displaced by its Hanoverian cousins. This section also contains biographies of the Stuart Pretenders including the courageous but highly impulsive Bonnie Prince Charlie.