The Byward Tower, sited at the southwest corner of the Tower of London complex next to the moat, is now used as the main entrance for visitors. The tower is the great gatehouse of the Outer Ward of the Tower of London and was built by King Henry III between 1238 - 1272 to offer additional protection to the central keep. 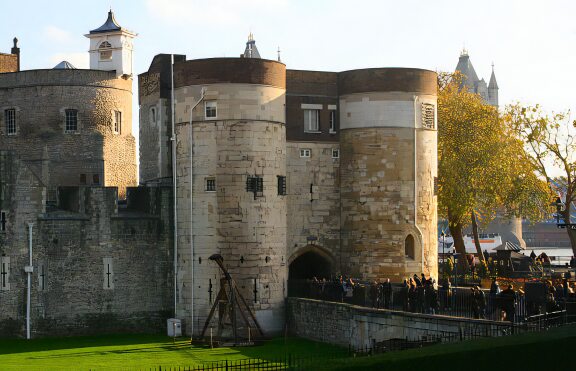 The tower comprised a series of defences to deter intruders including a drawbridge in the causeway, arrow loops in the twin towers and two portcullises. All these defences survive to the present day apart from the drawbridge and the inner portcullis.

The chief architect and master builder was Henry de Reyns together with John of Gloucester and Robert of Beverley. It is thought to have been built adjacent to the Warder's Hall and from this siting, the tower derived its name ( By the Warders).

The Byward Tower was further strengthened during King Richard II's reign in 1381 following the Peasants Revolt, when Richard and his mother, Joan, Countess of Kent sheltered in the Tower.

The building still retains its original form of two cylindrical towers although the height has been increased in the late medieval period and the late eighteenth or early nineteenth century.

The magnificent medieval wall painting on the first floor of the Byward Tower is the only surviving decorated medieval interior in the whole of the Tower of London. The painting is not accessible to the general public but relates the story of the death of Christ on the Cross, the central ‘Crucifixion’ figure has now been lost, destroyed by a later fire, though the figures of the Virgin Mary and St John the Evangelist in mourning positions still survive. The painting is covered in gold leaf and expensive pigments such as azurite (blue), vermillion (red) and lac (deep red).

The painting is thought to date from the 1390s, during the reign of Richard II, whose patron saint was St. John the Baptist.