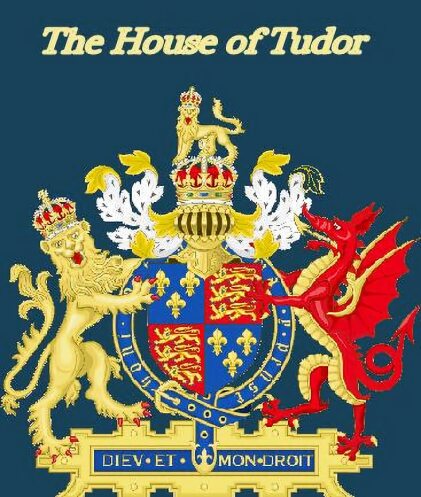 The House of Tudor took England's throne through victory over Richard III, the last Plantagenet king, at the Battle of Bosworth in 1485. Its founder, the Lancastrian Henry VII laid down the foundations of his dynasty, brought an end to the civil strife of the Wars of the Roses and through his marriage to the Yorkist heiress Ellizabeth of York, securely established the Tudors on England's throne.

The heraldic symbol of the dynasty, the red and white Tudor rose, combines the red rose of the House of Lancaster and white rose of York, meant to symbolize the union of the two warring factions, whose claims were combined with the union of Henry VII and Elizabeth of York.

The dynasty had relatively lowly beginnings, springing from an illicit liaison between Katherine of Valois, the widow of Henry V, and Owen Tudor, her Welsh Clerk of the Wardrobe. Owen was descended from Welsh prince Rhys ap Gruffydd, through his daughter Gwenllian Rhys, who married Ednyfed Fychan, seneschal of Gwynedd under Llewelyn the Great. Henry VII's claim to the English throne derived from his mother, Lady Margaret Beaufort (1443-1509), great-granddaughter of John of Gaunt, Duke of Lancaster through an illegitimate line.

The House of Tudor ruled England for 118 years. Henry VII's son, that best known of English monarchs, the tyrannical and bloodstained Henry VIII (1509-47), is famous for having six wives, executing two of them and bringing about the Reformation in England.

The throne of England was inherited by all of his three legitimate children in succession, the boy king, Edward VI (1547-53), Mary I (1553-58), known as 'Bloody Mary' for her burning of Protestants and last but by no means least Elizabeth I (1558-1603), highly astute and wily, she survived an appalling childhood and adolescence to emerge as the greatest of her house and lead England to victory over the Spanish, the greatest power of the age. The Tudor dynasty became extinct on the death of Elizabeth without a direct heir in 1603. The crown of England then passed to Henry VII's great-grandson, James VI of Scotland, who became James I of England.

Additional Information on the period