Consort of Mary I

Philip II of Spain was the only son of the Habsburg Emperor Charles V and his cousin Isabella of Portugal and was born in the Spanish capital of Valladolid on 21 May 1527.

Philip had two sisters with whom he was close, Joanna and Maria of Austria. He was described by the Venetian ambassador Paolo Fagolo in 1563 as "slight of stature and round-faced, with pale blue eyes, somewhat prominent lip, and pink skin, but his overall appearance is very attractive." He added, "He dresses very tastefully, and everything that he does is courteous and gracious." In 1543 Phillip married his double cousin Maria Manuela of Portugal, the daughter of King John III of Portugal and his wife Catherine of Austria. but she died giving birth to their son, Don Carlos, Prince of the Asturias on 12 August 1545 at Valladolid. 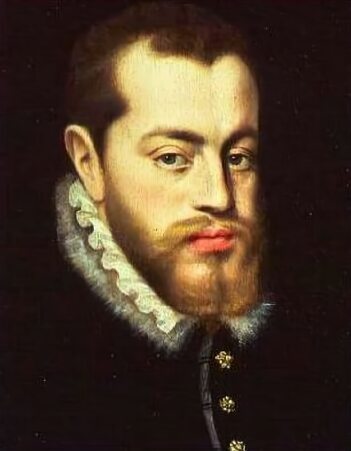 The young Carlos was willful and, in adolescence, began to exhibit signs of mental instability. Many of Carlos' physical and psychological afflictions may have been the result of inbreeding in the House of Habsburg and the House of Portugal. Instead of the normal of eight great-grandparents, Carlos had but four, his parents had the same coefficient of co-ancestry (1/8) as if they were half siblings.

Philip's thirty seven year old cousin Mary Tudor succeeded to the throne of England in 1553 on the death of her Protestant half-brother, Edward VI. There were several attempts by England's Protestant element to overthrow the new Catholic queen, which led Mary to the decision to form an alliance with Catholic Spain, a decision which was unpopular with the English, who disliked the idea of having a foreign king. 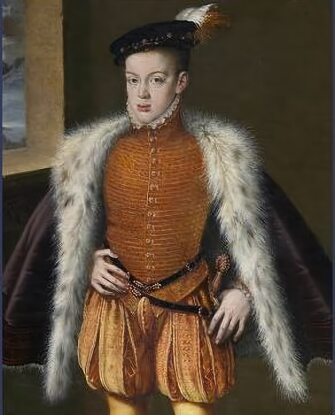 English national pride was not prepared to countenance a Spanish King, who was also a Catholic and rebellion broke out led by Thomas Wyatt. Mary arrested her half-sister, Elizabeth, whom she suspected of compliance in the plot and sent her to the Tower after which the fires of revolt were extinguished. The Spanish were reluctant to allow Philip to depart for England until the threat posed by Jane Grey was removed. The unfortunate Jane and her husband were accordingly beheaded.

Philip of Spain duly arrived in England and to elevate Philip to the same rank as Mary, his father ceded the crown of Naples as well as his claim to the Kingdom of Jerusalem, to him. The marriage was celebrated in July 1554, Phillip was eleven years younger than his bride. Philip and Mary appeared on coins together, with a single crown suspended between them as a symbol of joint reign. Mary, who had known little affection since her mother's death, was in love for the first time in her life at the age of thirty-seven. Philip, much younger than his bride, unfortunately, did not reciprocate her affection. Phillip's father, Charles V abdicated in 1555 and Philip became king of Spain, the Netherlands, and all Spanish dominions in Italy and America. Philip reactivated the Spanish Inquisition in an attempt to deal with the growth of Protestantism in Europe.

Mary believed herself pregnant but was humiliated when the desperately awaited child did not arrive at the due time and she had to accept that she had been mistaken. The Queen had suffered from a phantom pregnancy. Philip, never particularly enamoured of her, left England shortly after, leaving Mary desolate and deserted and pathetically yearning for his return.

Philip returned briefly to enlist England's support in a war against France, which led to the loss of Calais in 1558, which had been in English hands since the conquests of Edward III, a source of great sadness to the Queen. She was reported to have said at the time "When I am dead and chested you will find Calais written on my heart." Mary again believed herself pregnant of a child which would continue her work and ensure a Catholic succession. It turned out to be a tumour.

Philip, realizing that the succession of Mary, Queen of Scots to the English throne would be disadvantageous to Spain since she was at that time married to the Dauphin of France, had to be avoided at all costs. He persuaded Mary to name Elizabeth as her successor and marry her to a Spaniard. Elizabeth resisted such a marriage and the Queen could not, in good conscience, force her to do so. Mary died, deserted again by her husband, on 17 November 1558, of either uterine or ovarian cancer. 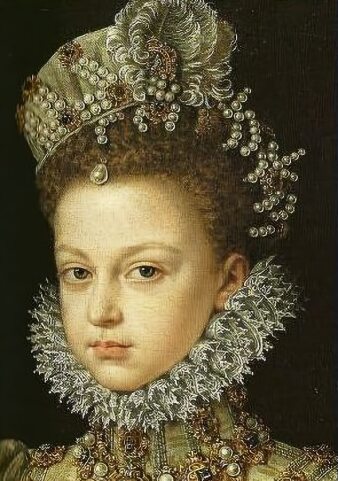 Reluctant to sever his tie with England, Philip proposed marriage to England's new sovereign, his sister-in-law, Elizabeth I , but his offer was diplomatically declined. Philip married for a third time to Elisabeth of Valois, the daughter of King Henri II of France in 1559. He was enchanted by his 14-year-old bride, and despite their age difference, Elisabeth wrote to her mother, that she considered herself to be fortunate to have married so charming a prince. The marriage produced two daughters:-

(i) Isabella Clara Eugenia of Spain, (12 August 1566 - 1 December 1633), who married Albert VII, Archduke of Austria, had three children, all of whom died in infancy

Elisabeth had originally been betrothed to Philip's son, Carlos, but political complications unexpectedly necessitated marriage to Philip. Her relationship with her troubled stepson Carlos was warm and friendly. Despite reports of his progressively bizarre behaviour, Carlos was always kind and gentle to Elisabeth.

Philip's son and heir Don Carlos were wild and unpredictable in his behaviour. He harboured a strong dislike to the Duke of Alba, who became the commander of Philip's forces in the Netherlands, a position that had been promised to him. Carlos also began to exhibit an antipathy towards his father, whose murder, according to Carlos' confessor, he supposedly contemplated. In the autumn of 1567. Carlos made preparations to flee to the Netherlands. However, Don Juan of Austria, Phillip's illegitimate half-brother, informed Phillip of his plans and in January 1568 Don Carlos was arrested and placed in solitary confinement on his father's orders. He died in isolation six months later. It was later claimed that he was poisoned on the orders of King Philip, although modern historians feel that Carlos died of natural causes. He grew very thin and developed eating disorders during his imprisonment, alternating self-starvation with heavy binges.

Elisabeth suffered a miscarriage on 3 October 1568, and died the same day, along with her newborn daughter. After her death, her mother Catherine de' Medici offered her younger daughter Margaret as a bride for Philip, but Philip declined the offer, because he thought it was against Biblical and Canon Law to marry the sister of a deceased wife. He married for a fourth time to his niece, Anna of Austria, the daughter of his sister Maria of Spain and the Holy Roman Emperor Maximilian II, who had once been considered as a bride for his son, Don Carlos. 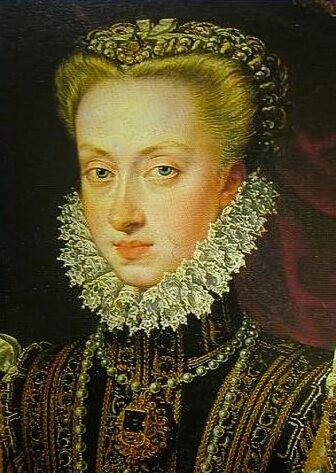 The aging king was said to be in love with his young bride, by all accounts, it was a happy marriage and marriage produced four sons and four daughters:-

Anna of Austria died of heart failure eight months after giving birth to Maria in 1580 and Phillip never remarried.

Philip continued the policy of the Catholic Ferdinand of Aragon and Isabella of Castille. He was merciless in the suppression of Protestantism in Spain, which had surfaced in Valladolid and Seville. When a man condemned to death for heresy reproached him for his cruelty, he is said to have replied "If my own son were guilty like you, I should lead him with my own hands to the stake". In 1568 the Muslims of Granada rebelled against him they were eventually defeated, but three years later, in 1570, rebellion broke out in the Netherlands, offering a much more serious threat.

Philip was crowned king of Portugal in 1580 and made a fresh attempt to regain control over the northern Netherlands. Elizabeth I sent aid to Protestants in the Netherlands. Philip had hoped that Mary, Queen of Scots, the heir to the English throne, would eventually become Queen of England and return the country to Catholicism, but in February 1587 Elizabeth finally signed her death warrant and she was executed at Fotheringhay Castle.

Philip decided to strike at the Protestant Elizabeth and in July 1588 the Spanish Armada sailed for England. On 6 August the Armada anchored at Calais. At midnight, eight fire ships were sailed towards the Spanish ships in the harbour. The Spanish ships fled to the open sea, making them targets for the English, many of the Spanish galleons. were sunk while the remainder headed north. The Armada rounded Scotland and headed south, but strong gales drove many of the ships onto Irish rocks. Thousands were drowned and those that managed to reach land were often killed by the English. Of the 25,000 men that had set out in the Armada, less than 10,000 arrived home safely.

The defeat of the Spanish Armada gave heart to Protestants across Europe. The storm that smashed the armada was seen by Philip's enemies as a sign of the will of God. Many Spaniards blamed the admiral of the armada for its failure, but Philip was not among them. A year later, he remarked: " It is impiety, and almost blasphemy to presume to know the will of God. It comes from the sin of pride. Even kings, Brother Nicholas, must submit to being used by God's will without knowing what it is. They must never seek to use it.

Philip II died of cancer at the age of 71 at El Escorial, near Madrid, on 13 September 1598. He suffered a painful death, which involved a severe attack of gout, fever, and dropsy, which he endured with patience. For 52 days the King deteriorated slowly. Finding it too painful to be moved to be washed, a hole was cut in his mattress for the release of bodily fluids. He was succeeded by his son Philip III.

The Ancestry of Philip II of Spain

Paternal Grandfather: Philip I of Castile

Paternal Great-grandmother: Isabella I of Castile

Maternal Great-grandmother: Isabella I of Castile