Undoubtedly one of England's greatest sovereigns and the last of the Tudors, Elizabeth I was born at Greenwich on 7th September 1533, the only surviving child of Henry VIII by his second wife Anne Boleyn. Her parents had hoped for a son, Henry VIII spent the last days of his wife's confinement deliberating whether to call the child Edward or Henry. Nevertheless, the new infant princess was given a magnificent christening on Wednesday 10th September 1533, at the church of the Observant Friars. The child was named Elizabeth after her grandmothers, Elizabeth of York and Elizabeth Howard. 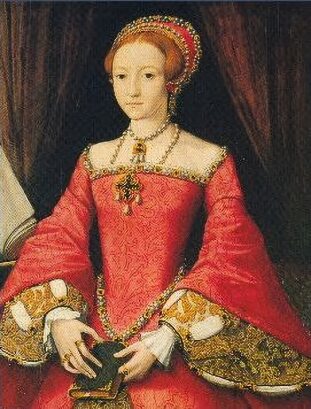 Elizabeth grew up in the school of adversity and early on had to endure 'the slings and arrows of outrageous fortune'. The experiences of her appalling childhood were to breed in her much political skill, cunning and circumspection. Her mother was executed on her father's orders, when she was but three years old and herself proclaimed a bastard. The precocious child, on being informed of her demotion, is reported to have responded "Why governor, how hap it yesterday my Lady Princess and today but Lady Elizabeth?"

Elizabeth was an astute, prematurely wary and intelligent child, with the red hair of the Tudors coupled with her mother's large dark eyes. She proved herself an excellent student in languages and like all of the Tudors was fond of music. She became fluent in Latin, Greek, French and Italian and experienced a measure of family life and security under her last step-mother Catherine Parr. Catherine recognised and encouraged Elizabeth's ability in languages and the pair grew close.

When her father died and her young brother succeeded to the throne as Edward VI, Elizabeth remained with Catherine, now Queen Dowager. Catherine remarried to Thomas Seymour the Lord Admiral, shortly after her husband's death. Seymour abused his position as Elizabeth's stepfather terribly. Engaging in "romps" with her, tickling her and jumping on her bed in the early morning. On one occasion he slashed her dress with a sword.

Catherine Parr died in childbirth and the ambitious Seymour embarked on a plan to marry Lady Elizabeth. As a result of these and other attempts at gaining power, Seymour was executed and Elizabeth placed in danger. She extricated herself skillfully and her comment on hearing of Seymour's death "This day died a man of much wit but very little judgement" betrays that she had learnt much from the affair.

Elizabeth experienced imprisonment in the Tower of London during her Catholic sister Mary I's reign, in the aftermath of the Wyatt rebellion, along with her cousin, Edward Courtenay, Earl of Devon, she was suspected of having foreknowledge of and involvement in the rising. Entering the Tower through Traitor's Gate, she was held in the Tower for two months, the shadow of the axe hung suspended over her and she was deeply afraid for her life. Her mother, Anne Boleyn had been executed in the Tower and the haunting spectre of her fate must have loomed large before Elizabeth throughout her stay of imprisonment. Bent on self-preservation, she stoutly denied any part of the plot. She was later released when nothing could be proved against her. For the remainder of Mary's reign, Elizabeth preserved life and limb by judicious attendance at the Catholic mass. 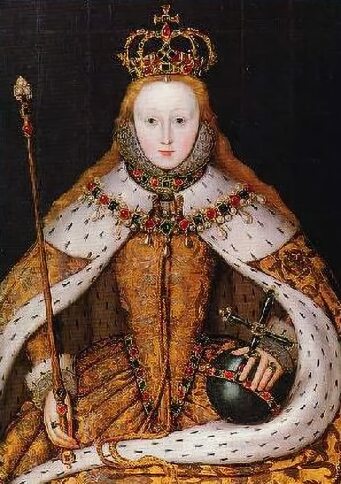 On the death of her sister Mary I in November, 1558, the twenty-five year old Elizabeth, having survived many reversals of fortune, and largely through her own aptitude and skill, ascended the throne.

From the start, the new Queen exhibited that she had learned much from her sister's mistakes and had no intention of repeating them. The England she inherited was at war with France, the exchequer was bankrupt, the coinage debased and inflation soaring, the country was also rent with religious difficulties. She appointed Sir William Cecil as her Secretary of State, informing him, "This judgement I have of you, that you will not be corrupted by any manner of gift and that despite my own will and pleasure you will give me such advice as shall be best for the state." Cecil was to prove himself a brilliant minister and served his mistress well for the next forty years.

The religious settlement Elizabeth I decided on was a characteristically cautious one. The Church of England was restored and a settlement based on the second Prayer Book of Edward VI established. She lacked the fanaticism of her sister and did not wish "to make windows into mens souls", her wish was that all men regardless of their religious views should obey her government.

On her accession, Elizabeth' brother-in-law, Phillip II of Spain, proposed marriage but his offer was diplomatically declined. The Queen had already decided not to marry for both personal and political reasons, but while she had determined never to marry, she had also determined never to let that be known. The possibility of her marriage, Elizabeth realised, was a powerful political bargaining counter which could be used to England's advantage on the chess-board of European politics and accordingly should not be discarded. With consummate skill, she manipulated the ambitions of the many foreign suitors for her hand.

Mary, Queen of Scots, her cousin and next in line to the throne, was married to the Dauphin of France. In Catholic eyes Queen Elizabeth I was illegitimate and Mary, advised by her father-in-law, Henry II of France challenged Elizabeth's right to the throne by quartering the arms of England with her own.

The Protestant Scottish lords were engaged in a struggle with the Catholic regent, Mary's mother, Marie of Guise. The English Queen, fearing the French having a foothold in Scotland, supported the lords and sent troops to aid them. The Treaty of Edinburgh of 1560 removed the French from Scotland and allied the lords, now in charge of the country, with England. Elizabeth's foreign policy had proved a success. 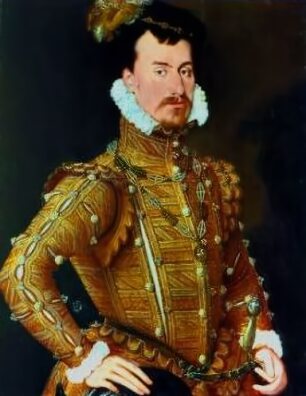 Elizabeth I and Robert Dudley

Robert DudleyThe Queen had appointed Robert Dudley, one of the sons of Protector Northumberland, as her Master of the Horse. Dudley was young and handsome, and the Queen, flirtatious by nature, delighted in his company. Favour was showered on him. He was created a Knight of the Garter and made a member of the Privy Council. Dudley unfortunately already had a wife, Amy Robsart. When she was found dead at the bottom of the stairs in her home at Cumnor, near Abingdon, it was claimed that he had deliberately got rid of her to enable him to marry the Queen. Scandal threatened to engulf Elizabeth. She responded quickly and distanced herself from her favourite. After an inquest passed a verdict of accidental death he was allowed to return to court.

Elizabeth's foreign policy was largely defensive except for the occupation of Le Havre from October 1562 to June 1563, which failed when Elizabeth's Huguenot allies joined with the Catholics to retake the port. The Queen had intended to exchange Le Havre for Calais, lost to France in January 1558, during the reign of her sister Mary. Only through the activities of her seamen did Elizabeth pursue an aggressive policy, which paid off in the war against Spain. She knighted Francis Drake after he circumnavigated the globe from 1577 to 1580, and he won fame for his raids on Spanish ports and fleets.

In 1585, following the deaths of the Protestant leader William the Silent, Prince of Orange, and Francis, Duke of Anjou, Elizabeth sent an army to aid the Protestant Dutch rebels against Philip II. The expedition was led by Robert Dudley, Earl of Leicester. Elizabeth's strategy was to support the Dutch on the surface with an English army, while beginning secret peace talks with Spain within days of Leicester's arrival in Holland, was contrary to Leicester's, who wished to fight an active campaign. Elizabeth advised him "to avoid at all costs any decisive action with the enemy". Elizabeth was accordingly enraged when he accepted the post of Governor-General from the Dutch States-General. Elizabeth saw this as a Dutch ploy to force her to accept sovereignty over the Netherlands.

Elizabeth I, the Rainbow Portrait 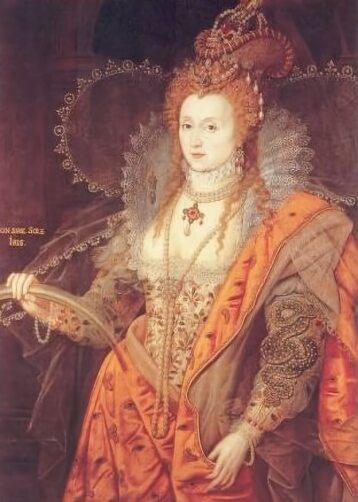 Elizabeth's ordered that her emissary read out letters outlining her disapproval before the Dutch Council of State, while Leicester stood nearby. The public humiliation of her "Lieutenant-General" combined with her continued talks for a separate peace with Spain, irreversibly undermined Leicester's standing among the Dutch. The military campaign was severely hampered by Elizabeth's repeated refusals to send promised funds. Her unwillingness to commit herself to the cause, Leicester's shortcomings as a political and military leader and the faction-ridden and chaotic state of Dutch politics led to the campaign's failure. Leicester finally resigned his command in December 1587.

Following the death of her young husband, Francis II of France, Mary Stewart returned to her native land of Scotland. The issue of the widowed Queen of Scots' remarriage was an important one to Elizabeth, as she wished to avoid a foreign power in Scotland. She offered her favourite, Robert Dudley, as a suitor for Mary's hand but he was quickly and indignantly turned down by the Scottish Queen, who perceived the offer to be an insult.

Mary rushed into a marriage with her handsome cousin Henry Stuart, Lord Darnley, who also had a claim to the English throne, thereby evoking Elizabeth's fury. After the birth of their son, James, Mary began to regret her hasty marriage. Darnley was proving to be both arrogant beyond measure and a worthless drunkard, rifts began to form between the couple. Mary's prior infatuation with her husband had turned to a smouldering resentment of the sot she had married.

Darnley, recuperating from a dose of syphilis, was murdered at Kirk o' Field. The house he was residing in was blown up and Darnley and a servant found strangled on the grounds. James Hepburn, Earl of Bothwell had carried out the deed and to the consternation of her subjects and the Scottish lords, Mary then hastened foolishly to marry her husband's murderer. Elizabeth wrote to her cousin counselling and beseeching her to use caution, but Mary did not heed the advice and rushed headlong to her ruin.

The Scottish lords rebelled and Mary was taken captive at Carberry Hill, Bothwell fled the country to later be imprisoned in Denmark. The Queen of Scots was imprisoned at Lochleven Castle and bullied and coerced into abdicating in favour of her infant son, James. Mary, using her legendary Stewart charm to its best effect, managed to escape from her prison on an island in the Loch and fled to England to gain aid from her " dear sister and cousin " Elizabeth to recover her throne.

"The daughter of debate" as Elizabeth I was known to refer to her, had, by her actions placed the English Queen in a dilemma. Her strong political sense urged that she should support the Protestant Scottish lords, but she also felt a sense of outrage that a fellow sovereign should be treated in such a manner. To keep Mary in England was to incur risks of her being the focus of Catholic plots, to return her to Scotland might be sending her to her death, but to send her abroad could mean her bringing a foreign power into Scotland.

Elizabeth set up a Commission of Enquiry to examine the matter. After the Casket letters had been produced, Elizabeth would not allow the commission to come to a verdict but opted for what she considered to be the safest option and imprisoned her Scottish cousin in England.