Anne Boleyn was the daughter of Sir Thomas Boleyn, later created 1st Earl of Wiltshire and Ormonde, and his wife, Elizabeth Howard, daughter of Thomas 2nd Duke of Norfolk. Controversy surrounds Anne's birth date, but it was probably late May-early June 1500 -1507 and was likely to have been at Blickling in Norfolk. Anne spent her childhood years at Hever Castle near Edenbridge in the Kent countryside. She had two siblings, a brother George, later created Viscount Rochford and an elder sister Mary Boleyn. Anne Boleyn 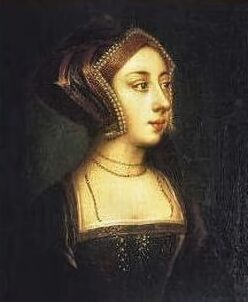 Anne's father's family, the Bullens, descended from merchant stock, her great-grandfather, Geoffrey Bullen, was a London mercer who rose to be Mayor of the city from 1457-8 and received a knighthood. Her mother was of much more illustrious origins, the daughter of Thomas Howard, Earl of Surrey, she was descended from Edward I and a host of aristocratic families. She was also the first cousin of Margery Wentworth, Jane Seymour's mother.

Thomas Boleyn was amongst a group of envoys assigned to the Regent of Netherlands court in 1512. While there, he formed a firm friendship with Margaret, Archduchess of Austria, which he used to secure a prestigious appointment for his daughter. Anne was educated in the household of the Archduchess Margaret of Austria in the Netherlands and after the winter of 1514, in Paris. Anne proved to be proficient in her lessons, particularly at languages. She excelled in French and eventually came to speak it like a native.

Anne grew into an attractive woman with dark hair, olive complexion and beguiling French ways and fashions, with a vivacious personality, but her most striking feature was her eyes, which were large dark and lustrous. It was later asserted that Anne suffered from Polydactyly, having six fingers on her left hand but this has recently been questioned on the grounds that there is no contemporary evidence to support it. 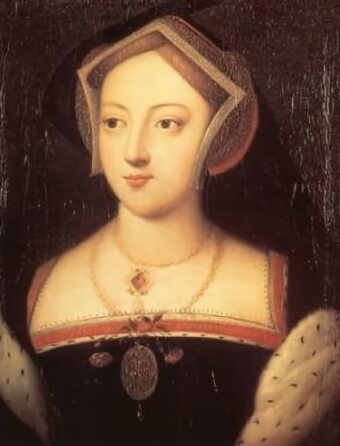 Anne returned to England in 1521 and first appeared at the English court at a masquerade ball in March 1522, where she danced with several court ladies including the king's youngest sister, Mary. She was at the time romantically involved with the young Henry Percy, the son of the Earl of Northumberland but Percy's father refused to agree to an engagement. Anne had other admirers at court, including the poet Thomas Wyatt. Anne's sister Mary had been the mistress of Henry VIII and was later married to Sir William Carey, a wealthy courtier. Anne herself first seemed to have caught the eye of the king in around 1525.

Learning no doubt, from the example of her sister, who had been cast off and of no further use, she resisted the king's attempts to seduce her, which succeeded in inflaming his ardour even more and he became infatuated with her. Henry VIII's passion for Anne Boleyn is evident in the famous love letters he wrote to her, seventeen of which still survive in the Vatican. The ambitious Anne refused to become his mistress and held out for marriage.

Henry's conscience, always a very pliable instrument, conveniently came into play. He claimed to be troubled by a verse in Leviticus stating it was sinful for a man to take his brother's wife and as punishment, any such transgressor would be childless. He persuaded himself that this was why God had denied him a male heir by his marriage to Catherine. 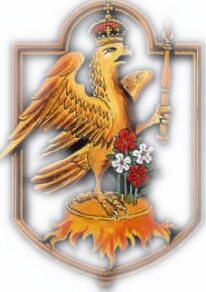 Led on by the resolute Anne, now determined to become queen, Henry resolved that he would divorce his wife, Catherine of Aragon. Catherine, however, refused to comply and acquired the considerable support of her powerful nephew, Charles V, Holy Roman Emperor and King of Spain. The Pope, caught in Charles' power, could not gratify Henry's desire for an annulment. Despite the strenuous efforts of Wolsey, "The Kings Great Matter" as it came to be referred to, dragged on for many years. Henry, characteristically furious and frustrated at not obtaining his own way, defied the Pope, setting himself up as head of the Church of England, a church that was Catholic in doctrine but divorced from the "Bishop of Rome".

Matters had now to proceed swiftly, as Anne had announced herself pregnant and Henry was determined that the child, whom he ardently convinced himself would be the longed-for son, should be born in lawful matrimony. Henry and Anne went through a secret wedding service, a second wedding service was performed, which took place on 25 January 1533. Thomas Cranmer, Archbishop of Canterbury, a man of decidedly Protestant leanings, performed the marriage service.

Henry's marriage to Catherine of Aragon was declared null and void. Catherine's daughter, the Lady Mary suffered deprivations and the humiliation of being publicly declared a bastard, she was denied access to her mother, although they continued to correspond in secret. Bishop Fisher and Sir Thomas More were among many who suffered execution because they could not, in good conscience, subscribe to the Act of Supremacy.

More commented that Anne Boleyn might "spurn off our heads like footballs" but it would not be long before her head "would dance the like dance," and so it proved to be. Anne's baby, born in September 1533, to Henry's fury, was not the promised son and heir, but a daughter, named Elizabeth, after the King's mother and was to be the future Elizabeth I. The king made no efforts to conceal his displeasure at the birth of a girl. When Anne later miscarried of a son in 1536 her fate was sealed.

The fall of Anne Boleyn

Henry's affections, always volatile and unsteadfast, had strayed to one of Anne's ladies in waiting, Jane Seymour. Mistress Seymour, prim, quiet and subservient, was the very antithesis of Henry's argumentative, loud and strong-willed wife, and therein probably lay her attraction to the king. Anne had promised him a son, but annoyingly had failed to deliver what he wanted and he was weary of heated arguments with her. The recent death of Catherine of Aragon had rendered it possible for Henry to be rid of Anne without anticipating the prospect of again being tied to Catherine. Ironically, while Catherine had lived, Anne remained safe in her position, Anne herself had long recognised the fact, declaring "she is my death and I am hers". 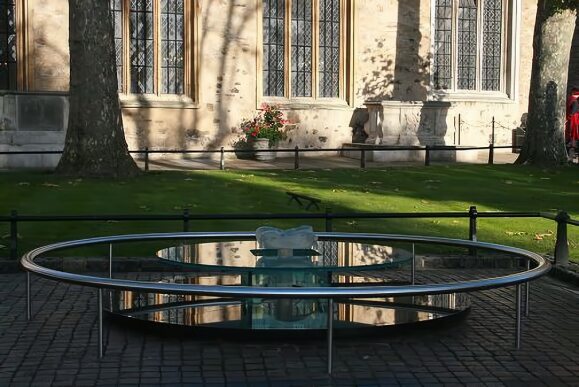 Anne was arrested and tried on a trumped-up charge of treason, for adultery with five men including her brother. It is unlikely that the charges against her had any basis in fact. After entering the Tower of London through Traitor's Gate, Anne was imprisoned in the Queen's House. Ironically, she had spent the night before her coronation there also, when at the peak of her power, such a short while ago.

After she arrived at the Tower in April 1536, Anne's behaviour oscillated from a resigned calmness to occasional bouts of hysteria and depression. Sometimes laughing, the next weeping uncontrollably. Anne's trial took place in the medieval Great Hall. Despite the spirited defence of her reputation and rigorous denial of the charges brought against her, which included the ridiculous charge of incest with her brother, she was sentenced, by a jury controlled by Henry, making it a predecided issue, to be burned or beheaded at the King's pleasure. Her uncle, the Duke of Norfolk presided over the jury, although her father, the self-seeking Thomas Boleyn was excused his duty as a juror.

Disliked for her arrogant manner, there was no one to defend Anne. She stoutly maintained her innocence of the charges throughout. Deserted by everyone, she went to the block with courage. Rather than the execution is carried out by a clumsy axe, Henry had considerately brought over an expert swordsman from France to execute his wife. She was beheaded privately on Tower Green on 19th May 1536, to enable the King to marry his new love, Jane Seymour.

She wore a "red petticoat under a loose, dark grey gown of damask trimmed in fur". Her dark hair was bound up and she wore her customary French headdress. After making a short and cryptic speech to the assembled crowd, Anne knelt and uttered a final prayer, her ladies removed the headdress and covered her eyes with a blindfold. The execution was swift, consisting of a single stroke. Anne's mangled corpse was hurriedly coffined in an arrow chest and buried in an unmarked grave in the Chapel of St Peter ad Vincula within the Tower.

During the restoration of the Chapel, the pathetic coffins of many of the victims of Henry VIII's tyranny were exposed in the nave. Included amongst these were the skeleton of a woman of 'excessively delicate proportions' which is thought to be that of Anne Boleyn, who was found only 2 feet below the floor of the chancel. Dr Frederic Mouat, a surgeon, examined the remains his findings record:-

"a female of between twenty-five and thirty years of age, of a delicate frame of body, and who had been of slender and perfect proportions; the forehead and lower jaw were especially well-formed. The vertebrae were particularly small." the skeleton also possessed " a well-formed round skull, intellectual forehead, straight orbital ridge, large eyes, oval face and rather square, full chin. The remains of the vertebrae and the bones of the lower limbs indicate a well-formed woman of middle height, with a short and slender neck. The hand and feet bones indicate delicate and well-shaped hands and feet, with tapering fingers and a narrow foot" and the woman was said to have stood "five feet, or five feet three inches, not more" in height. It has been argued however that this skeleton was that of Anne's cousin and Henry's fifth queen Catherine Howard.

Queen Victoria had a green and red marble memorial pavement laid in the sanctuary, which contains, amongst others, the names and coats of arms of Anne Boleyn.

Her daughter, Queen Elizabeth I, just two years old when Anne was executed can have had few memories of her mother, It is said that Elizabeth hardly mentioned Anne but in around 1575 she had a piece of jewellery commissioned, a ruby and mother of pearl locket ring, which she wore until her death in 1603. The ring had a secret locket compartment that opened to reveal two miniature portraits of Elizabeth and Anne Boleyn. When Elizabeth I died this ring was taken from her finger and sent to James VI in Scotland to prove that the Queen was indeed dead and he was now King of England.