The Bowyer Tower is situated midway on the north face of the inner curtain wall which surrounds the Tower of London.

The tower was built in 1238-41, by King Henry III, an avid royal builder who greatly altered the appearance of the Tower of London. The Bowyer Tower is D-shaped in plan with a south turret on two storeys. 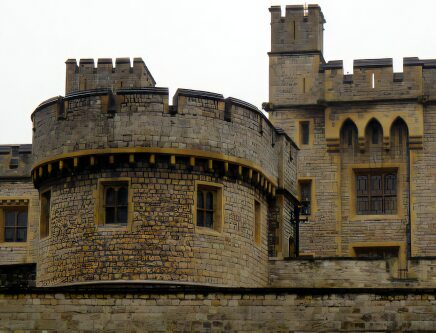 The ground floor room is the only original part of the building which survives to the present day, the rest was rebuilt in the nineteenth century following a fire which destroyed the upper storey of the tower. The fire which occurred on the night of 30th October, 1841, was caused when a flue had overheated and was first noticed at around half past ten. The Tower fire engines attended but the supply of water for them all could not be found. Engines from the city could not gain admittance past the guards at the Tower gates, the blaze spread quickly and began to engulf the Bowyer Tower. 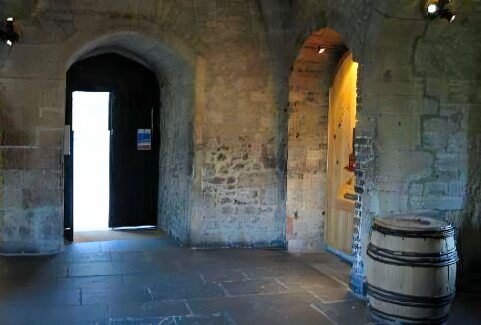 There were originally three arrow loops in the tower only one of which survives to the present day. The Bowyer Tower derives its name from the royal bowmakers who once worked there.

The room was used for storing weapons and for domestic purposes. There are two stone cupboards inside and, next to them is the entrance to a stair turret with a garderobe (toilet) underneath.

An excavation of the floor of the Bowyer Tower revealed the remains of the Roman city wall dating from about 200 AD. The city wall was destroyed when Henry III expanded the tower ten centuries later.

Tradition states that George Duke of Clarence, Shakespeare's, 'false, fleeting, perjured Clarence', the volatile and treacherous younger brother of Edward IV, who was found guilty of treason after a trial at Westminster Palace in 1478, was secretly put to death in a room in the Bowyer Tower.

Clarence had previously rebelled against Edward and his recent threatening behaviour had tried his brother's patience to the limit, compelling him to strike out against him. Their mother, Cecily Neville, Duchess of York, asked that her son's execution should not be a public spectacle, tradition states that he was put to death by drowning in a barrel of malmsey wine.