George Plantagenet, Shakespeare's, 'false, fleeting, perjured Clarence', was the third surviving son of Richard Plantagenet, Duke of York (1411-60), and Cecily Neville (1415-95) and was born on on 21 October 1449 at Dublin Castle, at a time when his father was serving as Lord Lieutenant of Ireland. 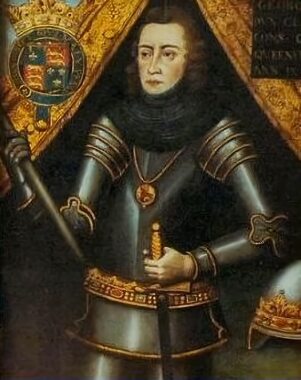 His father the Duke of York, a leading figure in the Wars of the Roses, had challenged the Lancastrian claim to England's throne and was defeated and killed at the Battle of Wakefield in December 1460. His head, adorned with a paper crown in derision, was placed over Micklegate at York. The seventeen-year-old Edmund, Earl of Rutland, the Duke's second son, was also killed on the battlefield. George and his younger brother Richard were despatched by their mother to Burgundy for safety.

George's elder brother, Edward, Earl of March, inherited the Yorkist claim to the throne and succeeded in defeating the Lancastrians at Mortimers Cross in February 1461 after which he was proclaimed king in London and at Towton in Yorkshire, on 29th March, Palm Sunday, 1461, he vanquished a Lancastrian army under the Duke of Somerset. The victorious Edward made a state entry into London in June and was crowned King Edward IV at Westminster.

The new king was generous to his two younger brothers, creating the elder of these, the then eleven-year-old George, as Duke of Clarence in 1461 and the younger, Richard, Duke of Gloucester. The seeds of discord between the brothers were sown when in 1464, Edward made Elizabeth Woodville, the widow of a Lancastrian knight, his queen. The queen's grasping and needy family were given grand titles befitting her elevated status, much to the chagrin of the "old nobility of the realm", particularly the king's powerful cousin, the over-mighty subject Richard Neville, Earl of Warwick, later to be known to history as Warwick the Kingmaker.

Cultivating a friendship with his cousin Richard Neville, Earl of Warwick, Clarence wished to marry his eldest daughter and heiress, Isabel Neville, however, his brother, the king, vetoed the match. In defiance of the king's orders, the couple travelled to Calais in 1469, where Archbishop Neville conducted the wedding ceremony. In alliance with his father-in-law, Clarence supported a rebellion in the north of England, when Edward discovered his brother's treacherous behaviour, he was deprived of his office as Lord Lieutenant of Ireland whereupon Clarence fled to France with Warwick. There, under the auspices of Louis XII of France, Warwick renewed his allegiance to the dispossessed Lancastrian queen, Margaret of Anjou, which was cemented by the marriage of his younger daughter, Anne Neville, to Edward Plantagenet, the Lancastrian Prince of Wales, the heir of Henry VI.

Warwick and Clarence launched an invasion of England, when Clarence, discontented to now find himself fighting to reinstate the Lancastrian dynasty, made secret attempts to reinstate himself in his brother Edward IV's favour. These being accepted, Clarence deserted his erstwhile ally Warwick, who was defeated and killed by Edward at the Battle of Barnet on 14 April 1471. Clarence's brother-in-law, Edward, Prince of Wales was also killed, either during or after the battle.

The youngest York brother, Richard, Duke of Gloucester, wished to marry the widowed Anne Neville, however Clarence, who was unwilling to allow him a share in the vast Warwick estates hid his sister-in-law. His attempts were thwarted by Richard, who discovered Anne's whereabouts and escorted her to the sanctuary of St Martin's in the Field. Eventually, a compromise was arrived at between the brothers, Richard married Anne Neville, while Clarence retained the greater share of the Warwick estates. 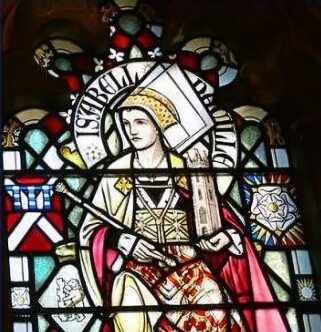 Clarence's marriage to Isabel Neville produced two surviving children, a daughter Margaret, Countess of Salisbury (1475 -1541) and a son Edward, Earl of Warwick (1475-1499). Isabel Neville died in December 1476, two months after giving birth to a short-lived son, Richard, after which Clarence attempted to arrange a grand marriage with Mary, heiress of Burgundy, to his fury, Edward IV again vetoed the arrangements.

Clarence, in what can only be described as a paranoic state of mind, convinced himself that his wife had been poisoned by a servant, Ankarette Twynho, who was promptly brought before the justices at Warwick. The unfortunate Ankarette Twynho was found guilty by a jury controlled by Clarence and hanged. It was reported that Clarence fed rumours that Edward was a bastard, the product of an illicit union between Duchess Cecily of York and an archer, Blaybourne and that he cast doubts on the validity of Edward's marriage to the queen, Elizabeth Woodville.

His alarmed brother, the king, in retaliation and as a warning, had a member of Clarence's household, John Stacey, accused of witchcraft and executed. Clarence, outraged, appeared at the council chamber at Westminster where he insisted a priest read John Stacey's declaration of innocence. A simultaneous rising in Cambridgeshire was believed to have been orchestrated by Clarence. Having gone too far, Edward, his patience tried to the limit, accused him of going above the law when he hanged Ankarette Twynho and he was arrested on the orders of the king and conveyed to the Tower on a charge of high treason, where he languished for several months, the king being reluctant to act against his brother.

On the 7th February 1478, sentence of death was, however, passed and on the 18th February the sentence was carried out privately in the Tower of London, Clarence was then 28. The execution is traditionally said to have taken place within the Bowyer Tower. Tradition states that he met his death by being drowned in a butt of malmsey wine. His remains were conveyed to Tewkesbury Abbey where he was buried beside his wife, Isabel Neville. Remains believed to be his were later exhumed and showed no signs of beheading, the normal method of execution for the nobility at the time.

Clarence's son, Edward, Earl of Warwick, due to his closeness to the throne, was imprisoned in the Tower of London by Henry VII and was executed in 1499 on a trumped-up charge of treason, the unfortunate youth was beheaded after attempting an escape with the pretender Perkin Warbeck. Clarence's daughter, Margaret, Countess of Salisbury, known as the last of the Plantagenets, was executed by King Henry VIII on 27 May 1541, as was her eldest son, Henry Pole, Baron Montagu. Henry's cousin, the Countess was also deemed by the pathologically suspicious King as too near to the throne to be left alive. Then aged nearly seventy, she was beheaded 'in a corner of the Tower'. Margaret proudly refused to lay her head upon the block, proclaiming herself 'no traitor'. In the hideous scene which followed, her neck and shoulders were hacked at in haphazard fashion by the executioner, as the old lady refused to keep them still. The mangled corpse of the last of the Plantagenets was buried in the Chapel of St. Peter ad Vincula in the Tower of London. She was beatified in 1886 by Pope Leo XIII, her second son, Reginald Pole, was exiled from England and became a Cardinal in the Roman Catholic Church, he returned and became an influential figure during the reign of Mary I.

In 2004, a documentary entitled "Britains Real Monarch" was aired on Channel 4 and presented by Tony Robinson. The programme put forward the claim that the present queen, Elizabeth II, is not the legitimate monarch, which they claimed, should be Michael Abney-Hastings, an Australian forklift truck driver and the direct descendant of George, Duke of Clarence. The programme claimed that they had discovered evidence to the effect that Edward IV was illegitimate, making Clarence's premier descendant the real King of England.

Rumours persisted at the time, which are articulated in Shakespeare's Richard III, that in the summer of 1441, Cecily Neville, Duchess of York had an affair with an English archer named Blaybourne at Rouen. In the documentary, the respected historian of the medieval period, Dr Michael K Jones, revealed evidence from an entry dated 1441, in the archives at Rouen Cathedral, which he discovered while researching the Hundred Years' War. The entry in question records that the clergy were paid for a sermon for the safety of the Duke of York, going to Pontoise on campaign. He was on campaign from July 14 to August 21, 1441, at the time several days' march from Rouen. Proponents of the theory of Edward IV's illegitimacy claim it is unlikely that Edward was born prematurely. By calculating back from Edward's birth on April 28, Edward's conception must have occurred around the first week of August 1441 at a time the Duke of York was not in Rouen, and therefore, it was claimed, neither Edward nor his descendants had any valid claim to the throne. The cathedral archives also revealed that the christening of Edward IV was a hushed-up affair, which took place in private in a side chapel of the cathedral, while in contrast, the whole cathedral was used for the christening of the couple's second son, Edmund, Earl of Rutland. It should however be added that Richard, Duke of York, never disclaimed paternity of Edward IV and several historians have argued that the Duke might have visited his wife at Rouen during the debated period.

With the aid of Debrett's, Tony Robinson traced the descendants of the Duke of York's third surviving son, the Duke of Clarence, (the second Edmund, Earl of Rutland had died childless) through his daughter, Margaret, Countess of Salisbury (1473-1541) known as the last of the Plantagenets, to Michael Edward Abney-Hastings, 14th Earl of Loudoun, then living in Jerilderie, New South Wales, Australia. Originally Michael Edward Lord (the name was changed by deed poll), he is the son of Barbara Huddleston Abney-Hastings, 13th Countess of Loudoun, (great great great granddaughter of Francis Rawdon-Hastings, 1st Marquess of Hastings) and Captain Walter Strickland Lord. The current and 14th Earl of Loudon left for Australia in 1960 where, a republican, he has since preferred to be known as Mike Hastings, he has 5 children and several grandchildren. It is, however, unlikely that he will be moving into Buckingham Palace in the near future.