Edmund, Earl of Rutland was the second surviving son of Richard Plantagenet Duke of York and his wife Cecily Neville, daughter of Ralph Neville, Earl of Westmorland and Joan Beaufort, herself the daughter of John of Gaunt, Duke of Lancaster. Edmund was born in Rouen, Normandy on 17 May 1443 while his father was serving in France as lord lieutenant for King Henry VI.

By the laws of primogeniture, Edmund's father, Richard of York had a good claim to the English throne, being descended from the second surviving son of Edward III, giving him a slightly better claim to the throne than the reigning king, Henry VI, who descended from Edward's third son.

Arms of Edmund, Earl of Rutland 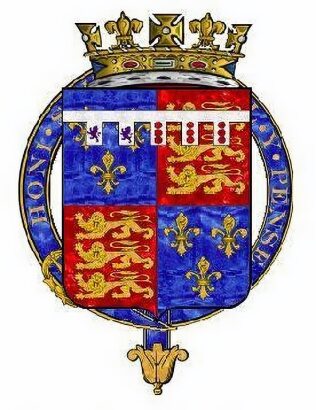 The title Earl of Rutland had previously been held as a subsiduary title of York's paternal uncle, Edward, Duke of York. His father appointed Edmund as heir to his Norman lands, an attempt by the duke of York to preserve his vast English inheritance intact for his eldest son, Edward, earl of March, but the loss of Normandy to the French in 1450 put an end to this plan. In 1451, York, who held the title of Lord Lieutenant of Ireland, appointed the eight year old Edmund as Lord Chancellor of Ireland.

In October 1459, Edmund, then aged sixteen, was present alongside his father and elder brother Edward at the Battle of Ludford Bridge, which marked an early setback for the Yorkist forces in the Wars of the Roses. As the two armies faced each other across the River Teme, a significant amount of the Yorkist troops defected, forcing the duke to flee the field. Rutland accompanied his father to Ireland, while his elder brother March went to Calais with their allies, his cousin, Richard Neville, earl of Warwick and Warwick's father the Earl of Salisbury.

Edmund returned to England with York in September 1460, two months after the Earl Warwick's victory at the Battle of Northampton where Henry VI was taken captive to London and the government fell to the control of the Yorkist faction. On his return from Ireland, York laid formal claim to the throne and by the Act of Accord of October 1460 Rutland was placed in the succession to the Crown behind his father and elder brother Edward.

On 2 December, Rutland was part of the force that his father and the Earl of Salisbury led out of London to quell Lancastrian unrest in the north of England. After a skirmish with Lancastrian forces at Worksop on December 16, the Duke of York arrived at his castle of Sandal near Wakefield in Yorkshire on 21 December, where he improved the castle's defences against a Lancastrian attack and intended to spend the Christmas season there.

The death of Edmund, Earl of Rutland at the Battle of Wakefield 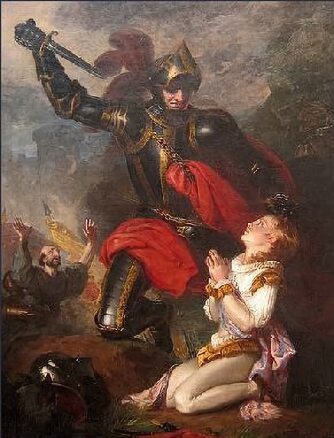 Edmund died at the age of just seventeen in the aftermath of the Battle of Wakefield (30 December 1460). On the morning of 28 December a Lancastrian force marched out from Pontefract to confront York, he was aware that Lancastrian armies were in the area and sent for aid to his son Edward, but before any reinforcements could arrive, he inexplicably sortied from the castle on 30 December.

When the Yorkist army charged out of Sandal Castle towards the Lancastrian force under Lord Clifford, Edmund had fought in the battle at the side of his father, who was slain in the melee. Taken prisoner after the battle, Edmund was recognised as York's son and despite pleas for mercy was executed either on the orders of the Lancastrian John Clifford, 9th Baron de Clifford, whose own father Thomas Clifford had been killed at the First Battle of St Albans on 22 May 1455, or by some accounts, by Lord Clifford himself in revenge for Clifford's own father's death at the hands of the Yorkists, Clifford was later to be termed 'the Butcher':-

'By reson of his apparell, (Clifford) demaunded what he was. The yog gentelman dismaied, had not a word to speake, but kneled on his knees imploryng mercy, and desiryng grace, both with holding vp his hades and making dolorous countinance, for his speache was gone for feare. Saue him saycle his Chappelein, for he is a princes sonne, and peraduenture may do you good hereafter. With that word, the lord Clifford marked him and sayde: by Gods blode, thy father slew myne, and so wil I do the and all thy kyn, and with that woord, stacke the erle to y hart with his dagger' -Edward Hall, Union of the Two Noble and Illustre Families of Lancastre & Yorke

The earl of Salisbury survived the battle and was taken to Pontefract castle where he was beheaded the following day. Queen Margaret of Anjou had the heads of York, Edmund of Rutland and Richard Neville Earl of Salisbury impaled on spikes and displayed over Micklegate Bar, the western gate through the York city walls, York's was crowned with a paper crown in derision. The slaying of Rutland is said to have infuriated his elder brother, Edward, Earl of March, who was in Wales at the time of the battle, and vowed revenge.

Clifford was killed at Dintingdale on 28 March 1461, the day before the decisive Yorkist victory at Towton, he was struck by an arrow in the throat after having carelessly removed his gorget. He is reported to have been buried in a pit, along with others slain there.

Edmund and his father were interred at Pontefract Priory. After his brother ascended the throne as Edward IV, Clifford was attainted, meaning that his title and estates were forfeited, at the first parliament of the new reign, on 4 November 1461. During an elaborate ceremony, their bodies were reburied in the family vault at the Church of St Mary and All Saints at Fotheringhay on 29-30 July 1476.