It has been said that Edward II was the great Edward I's only failure. It is true to say that never was there a son less like his father. A thoroughly flawed jewel in England's crown, he failed to live up to the country's expectations of a son of the formidable Edward I, a hard act to follow.

Edward had been born at Caernarfon Castle on St. Mark's day, 25th April, 1284, the fourth son of Edward I and his first wife Eleanor of Castile. The death of his older brother, Alphonso, a short time later, made the four month old Edward heir to the throne. His mother died when he was five. 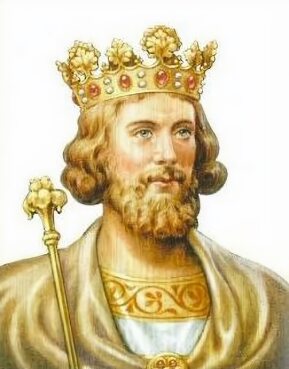 At the age of sixty, his father remarried in 1299, to Margaret of France, the seventeen-year-old sister of Phillip IV. His father's new wife was only two years older than himself. Edward became fond of his new stepmother, whom he is recorded as presenting with a gold and ruby ring and she often interceded for him to avert the wrath of his stern father. On 7th February 1301, at a Parliament held at Lincoln, Edward was created the first English Prince of Wales by his father.

Edward was a tall, strong and handsome youth who loved music and acting. He was homo-sexual and became excessively devoted to a succession of favourites. King Edward I, had banished Edward's lover, Piers Gaveston, in an outburst of Plantagenet rage, "on account of the undue intimacy which the young Lord Edward had adopted towards him". The younger Edward had asked his father to bestow the title of Count of Ponthieu on his lover. Edward I, irate at the fact that Edward “had an inordinate affection for a certain Gascon knight”, is said grabbed a handful of his son's hair, and pulled it out. The king threatened to disinherit his son, even going as far as to question the chastity of his beloved Queen, Eleanor of Castille.

King Edward II's inglorious reign began in 1307. One of his first acts as King was to re-call Piers Gaveston. The following year, Edward married the twelve-year-old Isabella of France, the daughter of Phillip IV by Jean of Navarre. He gave all the best jewels, received as wedding presents, to Gaveston, thereby grossly offending his bride. Although the marriage produced four children, two sons, the future Edward III and John and two daughters, Eleanor and Joan, later Queen of Scotland, Edward continued in his addiction to homosexual favourites. To the chagrin of his neglected Queen, Gaveston was showered with favours and made Earl of Cornwall. He added to his growing unpopularity by insulting and ridiculing some of the most powerful barons, he called the Earl of Warwick the 'black hound of Arden', ‘Let him call me“hound”,’ the earl is said to have commented, ‘One day the hound will bite him.’ The king liked to dress like his friend Piers, Edward's relationship with Gaveston referred to as 'the sin against nature' was usually mentioned indirectly, with comparisons to the Old Testament love of King David for Jonathan, 'a love beyond the love of women'.

The Battle of Bannockburn

While Edward dallied with Gaveston Robert the Bruce set about regaining the kingdom of Scotland. Edward led an army north in 1314 in an attempt to halt his advance. They met on Midsummer Day, 22 June, at the Battle of Bannockburn, near Stirling. The encounter was to go down as one of the most resounding defeats in English history.

The encounter began when Henry de Bohun famously charged alone against Robert the Bruce and was killed by an axe blow on the head by the Scottish king. The English army was hemmed into a tight space between the River Forth and the Bannockburn. The Scots bore down on them and routed Edward's army, inflicting a devastating defeat, many were killed whilst fleeing. The King of England himself was forced into a humiliating flight back to England with the Scots hard at his heels. Edward was turned away from Stirling Castle and fled in haste to Dunbar from where he managed to obtain a boat back to England.

The Rebellion of Isabella 'the She - Wolf of France'

A coalition of barons, known as the 'Ordainers' rose in rebellion against Edward. He was forced to sign 'Ordinances' to govern England better and Gaveston was held captive at Warwick Castle. Guy de Beauchamp, Earl of Warwick and the King's cousin, Thomas, Earl of Lancaster finally brought about Gaveston's death on 19 June 1312. Edward, distraught, had little choice but to accept the situation, but smoulderingly resentful, he vowed he would be avenged upon them. 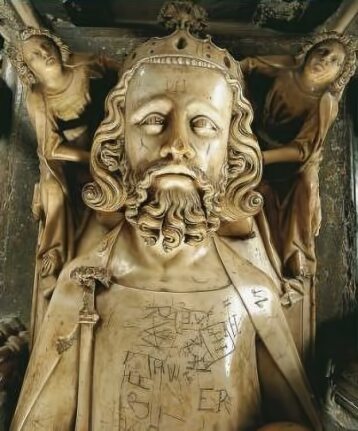 Edward, having learnt nothing from past events, acquired a new favourite, Hugh Despencer. Despencer and his father, also Hugh, two great Marcher lords, were anathema to the barons who brought about their banishment in 1321. The king struck back the following year, when he captured and executed his arch-enemy and cousin, Henry of Lancaster and recalled the Despencers.

His deeply insulted Queen, Isabella, was sent on a mission abroad to do homage to her brother the French King for England's French possessions. There she plotted against her despised husband with her lover, Roger Mortimer, Earl of March.

Her actions deeply shocked her brother the French king and the pair were obliged to move on to Hainault. In negotiations with William, Count of Hainault it was agreed that Isabella's son, the young Edward, should marry the count's daughter Phillipa in return for armed support of Isabella's rebellion. On 24th September 1326, Mortimer and Isabella, the She-Wolf of France as she was known to contemporaries, invaded England. They were joined by many of the country's dissatisfied nobles.

Edward failed in an attempt to rally London and fled but was captured and forced to abdicate in favour of his fourteen-year-old son, Edward. The hated Despencers were promptly executed. Landing at Orwell on the east coast, Isabella was joined by many disaffected nobles, including Thomas, Earl of Norfolk and Henry of Lancaster. Edward fled from London, Isabella and Mortimer besieged Bristol, which was being held for the king by Hugh de Despenser the Elder. When the city fell, Isabella recovered her daughters Eleanor and Joan, Despenser the Elder was executed by his Lancastrian enemies, his body was hacked to pieces and fed to the local dogs.

A huge crowd gathered to see Hugh Despenser the Younger die. They dragged him from his horse, stripped him, and scrawled Biblical verses against corruption and arrogance on his skin. He was then dragged into the city, and condemned to be hung, drawn and quartered.

Decapitated remains, uncovered at Hulton Abbey, in Staffordshire during the 1970s are said to those of Despencer. The skeleton had been beheaded and chopped into several pieces with a sharp blade, there was also evidence of a stab wound to the stomach. Carbon dating of the Hulton Abbey skeleton indicated that death occurred no later than 1385.

The room in Berkely Castle where Edward II was imprisoned 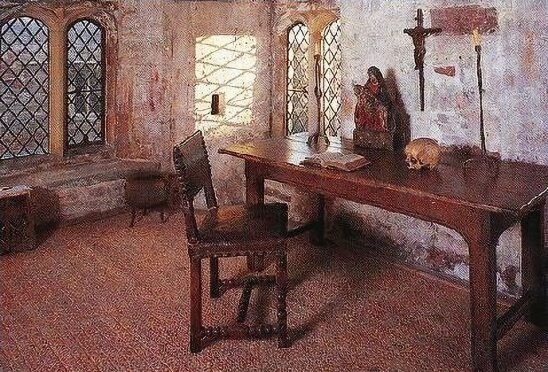 The Death of Edward II

King Edward II was imprisoned firstly at Kenilworth Catle and later removed to Berkeley Castle in Gloucestershire in January 1327. Thomas de Berkeley and Sir John Maltravers were appointed the ex-king's custodians. In the summer of that year, following a failed attempt to release him, in the interests of the safety of the new regime, it was considered more convenient if he were dead.

He was placed in a dungeon, into which was thrown filth and rotting animals, in the hope that he would contract some form of the disease and die, thus removing from his captors the responsibility for his murder. Edward, an extremely fit man, continued to doggedly survive this treatment.

According to the rather gory traditional belief, Edward was murdered in a bestial manner on the orders of Mortimer and Isabella on around 11th October 1327. A red hot poker was inserted into his entrails by means of a horn, to leave no outward marks on his body. The people of Berkeley were said to have heard the agonized screams of the dying king outside the castle.

This account of how Edward met his death is not, however, corroborated by any contemporary source and none of the directly contemporary chroniclers recorded with certainty how Edward II met his untimely end, which remains shrouded in mystery.

On 24 September 1327, the then fourteen-year-old king Edward III wrote to the earl of Hereford informing him that his father had been 'commanded to God'. At the Westminster parliament of November 1330, the first one held after the fall of Mortimer from power, the cause of the ex king's death was finally declared as murder. The regicides were named Sir Thomas Gurney and William Ockley, a man-at-arms.

How Edward died was never officially stated and there are conflicting theories on the issue. Some chroniclers merely state that Edward died at Berkeley, others relate that his death was due to natural causes, other reasons for his death include that died of illness, sorrow, suffocation, strangulation and 'either ' death or by the violence of others. 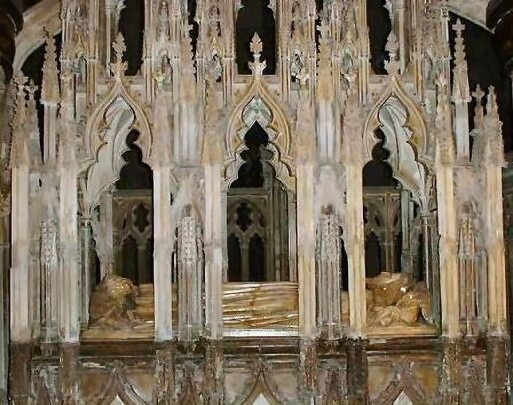 Some contemporary or near-contemporary chronicles, dating between the 1330s and the 1350s, record the red-hot poker version. The Scalacronica records reprovingly that the ex-king died 'by what manner was not known, but God knows it.'

Later writers on the subject, with no method of ascertaining what had occurred, quoted earlier chronicles, and over time the infamous account of the red-hot poker spread and is claimed as 'fact' even to the present day.

According to the Fieschi Letter written to Edward III in around 1337 by Manuele Fieschi, a Genoese priest of Avignon, later Bishop of Vercelli, which was discovered in the nineteenth century at Montpellier, Edward escaped his jailors and lived out the remainder of his life in monastic hermitages near Milan. The letter pre-dates accepted accounts of Edward's brutal murder. The authenticity of the Fieschi letter is not doubted, its motives, however, are.

Edward was interred at Gloucester Cathedral, the funeral was attended by Isabella and the new king, the young Edward III.

The posthumous reputation of Edward II

Edward III, who was said to have been attached to the memory of his father, felt troubled in his conscience at the part he had been made to play in his overthrow and later commissioned a magnificent memorial effigy for his tomb.

He and his Queen, Phillipa of Hainault visited the tomb as pilgrims. Setting an example that was followed by his son, Edward, the Black Prince and Edward II's daughter, Joan, Queen of Scotland. Edward III's grandson, Richard II, made unavailing efforts to have his great-grandfather canonized. The cult of Edward II, which had grown up around his tomb at Gloucester, continued until the Reformation.