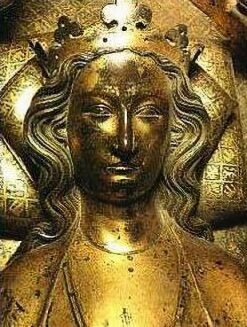 Eleanor of Castile, or Leonor as she was known in early life, was born in 1241, the second of five children of Ferdinand III, King of Castile and Joan of Dammartin, Countess of Ponthieu. She was named for her father's maternal grandmother, Eleanor of England, the daughter of Henry II and Eleanor of Aquitaine, who married Alfonso VIII of Castille. 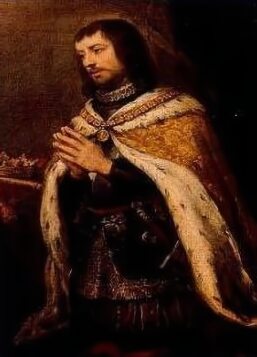 In 1252, Eleanor's brother, Alfonso X of Castile, laid claim to the duchy of Gascony, in Aquitaine, owned by the Kings of England since the marriage of Eleanor's 2 greats grandmother, Eleanor of Aquitaine to Henry II. At the time, Gascony was the last surviving remnant of the Angevin Empire in France.

At peace talks between the two countries in 1254 it was agreed that King Henry III's fifteen year old son son Edward (pictured below left) would marry the thirteen year old Eleanor and in return Alfonso would transfer his claims on Gascony to them. The couple, who were second cousins, were married at the monastery of Las Huelgas, in Burgos on 1st November 1254. Edward was knighted by Eleanor's half-brother, Alphonso X, to mark the occasion.

During the Second Barons' War, Eleanor actively aided her husband's interests, importing archers from her mother's county of Ponthieu in France. A rumour that she was attempting to obtain troops from Castile led the leader of the Baron's revolt, Simon de Montfort, to order her removal from Windsor Castle in June 1264 following the Henry III's defeat at the Battle of Lewes. Prince Edward was captured at Lewes and imprisoned, while Eleanor was confined at Westminster Palace. De Montfort appropriated control of the government and a subsequent first representitive parliament was called in 1265. Edward defeated the baronial army at the Battle of Evesham in 1265, in which de Montfort was killed.

Eleanor and Edward were devoted to each other, unlike many medieval kings, no mistresses of Edward I have ever been recorded. Each year on Easter Monday, Edward let Eleanor's ladies trap him in his bed and paid them a token ransom so he could go to her bedroom on the first day after Lent. Her devotion to Edward was said to help bring out his better qualities. Eleanor gave birth to a son, John, in July 1266, who was followed by a brother, Henry, in the spring of 1268, and in 1269 by a daughter, Eleanor.

Edward, accompanied by Eleanor, joined the Eighth Crusade, which was led by his uncle Louis IX of France. Louis of France breathed his last at Carthage prior to their arrival. After spending the winter in Sicily, they went on to Acre in Palestine, arriving in May 1271. There Eleanor gave birth to a daughter, known as Joan of Acre. An assassination attempt was made on the Edward in June 1272. A member of the secret society of the Assassins, acting on the instructions of one of the Emirs in negotiation with Edward and feigning he came on secret business, obtained an interview with the English prince and wounded him in the arm by a poisoned dagger. The wound soon became seriously infected, his life was saved by an English surgeon, who cut away the diseased flesh. The story was later embellished, making claims that Eleanor sucked poison from the wound. The couple left Palestine in September 1272 and in Sicily that December they learned of the death of Henry III which had occurred on 16 November 1272. 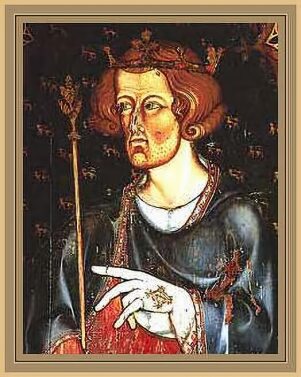 Edward's mother, Eleanor of Provence remained in England after the death of her husband and helped in the bringing up her grandchildren, Eleanor's children, Henry, Eleanor and John. When her grandson Henry died in her care, she mourned his death greatly, founding Guildford Priory in his memory. A third son, Alphonso, Earl of Chester, was born at Bayonne, in Gascony on 24 November 1273, he was given the very un-English sounding name of Alphonso after his maternal uncle, King Alfonso X of Castile, who was his godfather. Eleanor gave birth to the future Edward II at Caernarfon Castle on 25th April 1284. Shortly after the birth of his younger brother, Alphonso died at Windsor at the age of ten, leaving the four months old Edward as his father's heir. During their thirty-six years of marriage Eleanor bore Edward sixteen children. Of these six survived to adulthood. 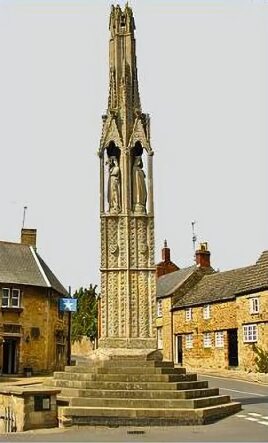 Shortly after the birth of her fifteenth child, Beatrice, Eleanor's health began to deteriorate. In 1287, while she was in Gascony she suffered from a double quartan fever, which was possibly a strain of malaria. In the autumn of 1290, news arrived at court that Margaret, the Maid of Norway, heiress of Scotland, had died. The couple travelled towards Lincoln, Eleanor was unwell with a feverish illness, probably a recurrence of the quartan fever of 1287. Eleanor's condition worsened as they reached the village of Harby, in Nottinghamshire, and she died there, with Edward at her bedside on the evening of the 28th November 1290, aged 49.

The normally thick skinned Edward I was deeply affected by her death . In a letter of January 1291, seeking prayers for the soul of his late wife, he wrote "whom living we dearly cherished, and whom dead we cannot cease to love." In her memory, he ordered the construction of twelve elaborate stone crosses, known as the Eleanor Crosses, tall, pointed, highly ornamented monuments (of which three survive) between 1291 and 1294, marking the route of her funeral procession between Lincoln and London.

From St Catherine's Priory in the south of Lincoln, the cortege took 12 days to reach London and between 1291 and 1294 for each place where the procession rested overnight an Eleanor's Cross was erected. The stopping places were at Grantham, Stamford, Geddington, the Delapre Convent at Hardingstone, Northampton, Stony Stratford, Dunstable, Waltham Abbey, Cheapside and Charing Cross (deriving from chere reine cross- dear queen cross). The only remaining piece of the St Catherine's cross left in Lincoln is housed in Lincoln Castle but there are three crosses remaining at Geddigton, Hardingstone and Waltham, replicas exist at other places such as Banbury).

After embalming, which in the thirteenth century involved evisceration, Eleanor's viscera were buried in Lincoln Cathedral and Edward placed a duplicate of the Westminster tomb there. Eleanor's heart was taken with her body to London and was buried Blackfriars Priory. Eleanor's funeral took place in Westminster Abbey on 17th December, 1290. Her tomb consisting of a marble chest with carved mouldings and shields, of the arms of England, Castile, and Ponthieu. The chest is surmounted by gilt-bronze effigy by William Torel.

Edward remarried some ten years after her death, he and his second wife Margaret of France, daughter of Philip III of France, named their only daughter Eleanor in memory of her. Edward I was succeeded in 1307 by Eleanor's only surviving son Edward of Caernarvon.


The Ancestry of of Eleanor of Castille

The family of Edward I and Eleanor of Castille