Eleanor's paternal grandfather, William IX, Duke of Aquitaine was, by all accounts, a colourful character with an infectious joie de vivre, a musician and poet, he came to be acknowledged as the first of the troubadours. He had abducted Dangereuse, the wife of Aimeric I, Vicomte of Chatellerault and made her his long term mistress, flaunting their relationship by displaying her naked image on his shield. His wife, Phillipa of Toulouse, retired into a nunnery.

Effigy of Eleanor of Aquitaine at Fontevraud 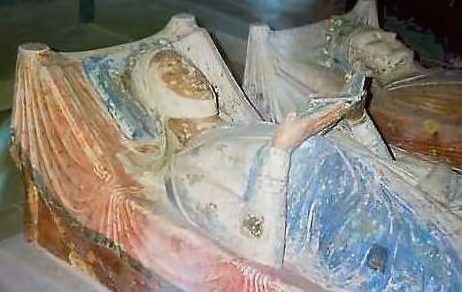 At the prompting of Dangereuse, William IX married his son and heir William, to her daughter Aenor. This complicated family situation resulted in Eleanor's maternal grandmother being the mistress of her paternal grandfather. The future William X and Aenor produced three children, a son, William Aigret, who died young, and two daughters, Eleanor and Petronella, the children were nurtured in the troubador culture of the warm south at her grandfather's court, with its cult of courtly love. 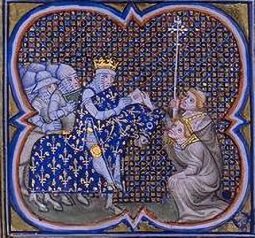 Marriage to Louis VII of France

William X succeeded his father as Duke of Aquitaine and in 1137, set out on pilgrimage to the shrine of St. James of Compostella, leaving his daughters in the charge of Geoffrey de Lauroux, Archbishop of Bordeaux. He failed to return, on the journey home he was taken gravely ill and died on the 9th April 1137. Eleanor, then aged about 15, became one of the most powerful heiresses in Europe, her father had named Louis VI of France, known as the Fat, as her guardian. At the time of William X of Aquitaine's death, Louis VI was himself mortally ill, vastly obese, he was confined to his bed. He decided to marry his new ward to his teenage son, Louis, the heir to France, thereby acquiring the vast lands and wealth of Aquitaine for the French crown.

Contemporary writers praise Eleanor's beauty, when she was young, she was described as perpulchra, meaning more than beautiful. When she was around 30, Bernard de Ventadour, a noted troubadour, called her "gracious, lovely, the embodiment of charm," extolling her "lovely eyes and noble countenance". William of Newburgh emphasized the charms of her person, and even in her old age, Richard of Devizes described her as beautiful. 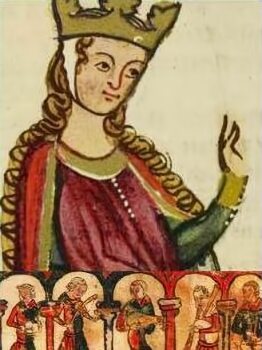 Louis and Eleanor were duly married at the cathedral of Saint-André in Bordeaux on the 12th of July 1137. The newlywed pair possessed disparate personalities, Eleanor was high-spirited, worldly and strong-headed; Louis was pious, meek and monkish. Louis VI died a few days after the wedding, making Eleanor Queen Consort of France. Eleanor's sister, Petronella, who was brought to the French court, engaged in an illicit affair with Raoul I of Vermandois who attempted to repudiate his wife, the niece of the powerful Theobald of Champagne, to marry Petronella. Louis VII, encouraged by Eleanor supported Petronella and Raoul. War broke out as a result. The town of Vitry was burnt and the townspeople sought refuge in a church, which burned down. More than one thousand perished in the flames. The sensitive Louis' conscience was sorely troubled by the affair and he was plagued by the screams of the dying.

Peace was eventually restored and King Louis decided to go on crusade to the Holy Land to expiate his sins. Eleanor also enthusiastically took up the cross and persuaded her husband to allow her and her ladies to accompany him. The Second Crusade achieved little and it was rumoured that Eleanor indulged in an extramarital affair with her uncle, Raymond of Antioch. Raymond was described as a tall and elegant figure, handsome and a man of charming affability and conversation, open-handed and magnificent beyond measure. Eleanor spent so much time in her uncle's council, that chroniclers were later to hint at improprieties were committed between the two. She was torn away from Antioch at night by a furious Louis, who was later advised in a letter from Abbot Suger 'conceal your rancour against the queen.' Raymond and Eleanor never met again. Raymond was killed at the Battle of Inab in 1149. He was beheaded by Shirkuh, the uncle of Saladin.

Eleanor and Louis produced two daughters, Marie (1145-1198), who later married Henry I, Count of Champagne and Alix (1151-1198), who married Theobald V, Count of Blois. However, the couple became increasingly estranged as the years passed, Eleanor found her meek and devout husband boring and the marriage was finally annulled on 11th March 1152. Louis acquired custody of the couple's daughters and Eleanor retained the rich lands of Aquitaine. 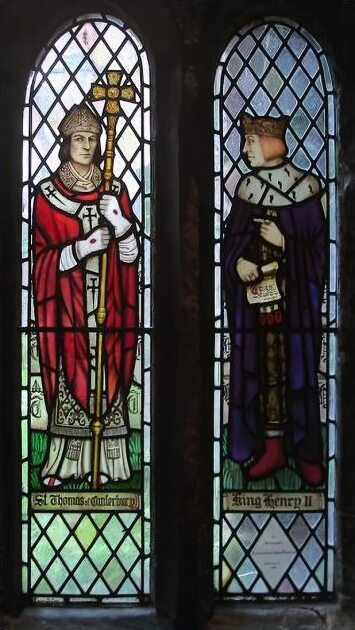 Once again a wealthy heiress in her own right, attempts were made to abduct Eleanor to acquire her estates. Only six weeks after her annulment, Eleanor married for a second time to the young Henry Plantagenet, Duke of Normandy and Count of Anjou, a man eleven years her junior. Both were strong characters, accustomed to having their own way and resultantly the stage was set for a extremely stormy and tumultuous union. A man of immense energy and dynamic personality, Henry was possessed of the fearful Angevin temper, apparently a dominant family trait. In his notorious and uncontrollable rages he would lie on the floor and chew at the rushes and was never slow to anger. Eleanor had previously been the lover of his father Geoffrey Plantagenet, Count of Anjou who advised his son against the marriage.

Like his grandfather before him, Henry was a man of strong passions and a serial adulterer, he incensed his passionate and strong-willed wife by introducing his bastard son, Geoffrey, the son of Hikenai, a woman of loose morals, into the royal nursery in the early days of their marriage. Eleanor, a proud woman, found this insult difficult to stomach. Much to the chagrin of his wife, he later took Rosamund Clifford as his long term mistress. Eleanor was aware that he was particularly enamoured of Rosamund and she was to become the mother of two of his many illegitimate children. The neglected Queen returned to her native Aquitaine, there establishing her court and taking her son Richard along with her, who was designated her heir. Spurned by her husband's neglect, Eleanor encouraged her brood of unruly and discontented sons to rebel against their father and in 1173 was captured by Henry whilst attempting to join her sons in Paris.

She spent the next fifteen years as her husband's prisoner, during which time her eldest surviving son, Henry, the Young King, "a restless youth, born for the undoing of many" died while in revolt against his father. Her fourth son, Geoffrey, was killed at a tournament in Paris on August 19, 1186, at the age of twenty-eight, he was reputed to have been trampled to death in the melee.

When Henry died on July 6, 1189, her favourite son Richard ascended the throne of England and one of his first acts was to order the release of his revered mother. He was to prove to be an absentee king and soon after his coronation, inspired no doubt by the tales of his mother's crusade, left England to take part in the Third Crusade.

Eleanor of Aquitaine and Prince John 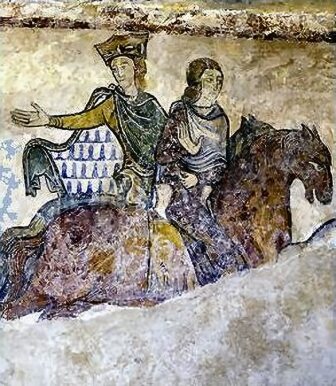 Eleanor escorted his intended bride, Berengaria of Navarre, who was to join him on the crusade, from Spain to Sicily, for their marriage. Their union produced no children. On his return journey, Richard was taken captive and held for ransom. Eleanor campaigned tirelessly for his release, adressing the Pope in an outraged letter of complaint as "Eleanor, by the wrath of God, Queen of England". She personally delivered his ransom.

When Richard was mortally wounded at the Siege of Chaluz, she rushed to be with him at the end. On 6th April 1199 "he ended his earthly day" in her arms and she escorted his body to Fontevrault for burial.

Now in her late seventies, Eleanor's travels were far from over. The terms of a truce between Louis' son, King Philip Augustus II of France and King John in 1199, agreed that Philip's son the Dauphin Louis, then 12, was to marry one of John's Castillian nieces, the daughters of King Alfonso VIII and Eleanor's daughter, Queen Eleanor of Castille. John sent his mother to Castile to select one of the princesses and escort her to France. Then aged 77, Eleanor set out from Poitiers. Just outside the city she was ambushed and held captive by Hugh IX of Lusignan. Eleanor secured her release by agreeing to his demands and continued on her journey south, crossing the Pyrenees, she arrived in Castille before the end of January 1200.

King Alfonso VIII and Queen Eleanor had two daughters who were yet unmarried, Urraca and Blanche. Eleanor chose the younger daughter, Blanche, whose name she thought would appeal more to French ears. She remained at the Castilian court for two months, spending time with the daughter she had not seen in decades. Late in March, Eleanor set off back across the Pyrenees with her granddaughter Blanche. She celebrated Easter at Bordeaux, where she was joined by Richard's captain, Mercadier, intending to escort Eleanor and Blanche north through France. However, on the second day in Easter week, he was slain in the city by a man-at-arms in the pay of a rival mercenary captain. This tragedy distressed Eleanor, who was suffering from fatigue. She felt unable to continue to Normandy. She and Blanche travelled in easy stages to the valley of the Loire, where she entrusted the care of Blanche to the Archbishop of Bordeaux. Exhausted, Eleanor retired to Fontevrault.

She supported her youngest son John as King of England in preference to her grandson, Arthur of Brittany. Arthur, the son of Eleanor's fourth son Geoffrey and Constance of Brittany, attempted to recover his inheritance from John and in the summer of 1202, besieged his octogenarian grandmother at Mirebeau Castle which she valiantly held for John. Eleanor resorted to delaying tactics while sending an urgent message to her son for aid. John responded with alacrity, covering the 80-mile distance from Le Mans in 48 hours, he came to the aid of his mother and took Arthur, prisoner. Eleanor advised her son to make peace with her grandson, but Arthur was later murdered at Rouen by his ruthless uncle. Eleanor's reaction to his disappearance has gone unrecorded, although it led Shakespeare to refer to her as a 'cankered grandam'.

Eleanor retired to Fontevraud, where she hoped to find peace and took the veil. Her magnificent constitution was at last exhibiting signs of failing and she was reported to be often unwell, she was visited there by John. Richard's 'saucy castle' Chateau Gaillard, fell to the French and as Phillip began the dismemberment of the crumbling French Angevin Empire, Eleanor sank into a coma, the annals of Fontevrault recorded that she 'existed as one already dead to the world'. Eleanor of Aquitaine died in 1204 and was buried at Fontevraud, the mausoleum of the early Plantagenets, by her husband, Henry II and her best loved son, Richard. Constructed in the thirteenth century, and ravaged by time and revolution, her painted effigy depicts her reading a book, reflecting her love of learning.

The Ancestry of Eleanor of Aquitaine

The Children and Grandchildren of Eleanor of Aquitaine

By her first marriage to Louis VII, King of France :-

(ii) Marie of Champagne (died 1204), married Baldwin I of Constantinople

By her second marriage to Henry II, King of England :-

(i) Raymond VII of Toulouse