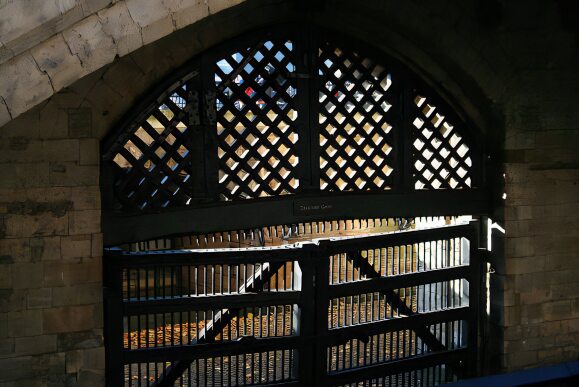 The gate was designed by the Medieval architect Master James of St George on the orders of King Edward I between 1275 and 1279 to provide a new water-gate by which King Edward could arrive at the Tower by river. In the proceeding centuries, as the Tower of London increasingly came to be used as a prison for enemies of the state accused of treason, it acquired its current name of Traitors Gate due to the the number of prisoners, accused of treason, who have passed through it. Prisoners were brought by barge along the Thames, passing under London Bridge, where the grisly heads of recently executed prisoners were displayed on pikes.

Queen Anne Boleyn was arrested on the charges of treason, adultery and incest in 1536. Sir Henry Norris and the Queen's brother, George Boleyn, Lord Rochford were arrested, accused of adultery with the Queen and taken to the Tower of London by barge and also passed through the Traitors Gate entrance. 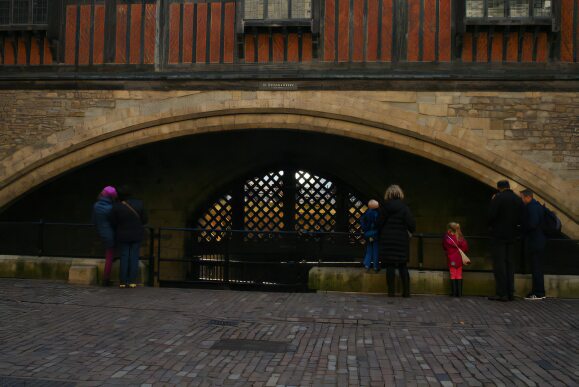 On May 2 1536, the Queen was taken to the Tower by barge from Greenwich, as she passed through Traitors Gate she was met by William Kingston the Constable of the Tower at the top of the steps leading from Traitors Gate. 'Shall I go to some dungeon?' the Queen enquired, to which Kingston replied, 'No, madam, you shall go to your chambers whereat your Grace lay before your Coronation.' Anne's behaviour while imprisoned in the Queen's House in the Tower oscillated from a resigned calmness to occasional bouts of hysteria and depression. Sometimes laughing, the next weeping uncontrollably. She was executed on Tower Green on 19th May 1536 and was buried in the nearby Chapel of St. Peter ad Vincula.

Anne's daughter, Princess Elizabeth, the future Queen Elizabeth I, was also to pass-through Traitors Gate. Her half-sister Queen Mary, the daughter of Henry VIII's first marriage to Catherine of Aragon, ordered Elizabeth's arrest believing her to be involved in the Wyatt Rebellion.

Elizabeth was taken on Palm Sunday 1554, by barge, to the Tower. The fate of her mother, Anne Boleyn, who had been executed on Tower Green when she was but three years old, must have been paramount in her mind as she passed through Traitors GateElizabeth, in a state of terror, believed that she would never leave the Tower once she had passed through Traitors Gate. She refused at first to land at the gate, angrily proclaiming that she was no traitor. There was a heavy downpour of rain. Elizabeth had no choice but to be lead into the Tower. She passed under the arch of the Bloody Tower where she may have seen, across the inner ward, the scaffold on Tower Green leftover from the execution of her cousin, Lady Jane Grey, who was also implicated in Wyatt's Rebellion.

At the age of 21, Princess Elizabeth was imprisoned in the Bell Tower. Possessed of a great deal of intelligence and fortitude and a born survivor, Elizabeth ensured nothing could be proved against her. She was allowed to take exercise by walking along the battlements which adjoined the Beauchamp and Bell Towers, which is still known as Elizabeth's Walk. Finding no evidence of Elizabeth's involvement in the plot, Mary was eventually prevailed upon to release her.