Colonel Blood and the theft of the Crown Jewels 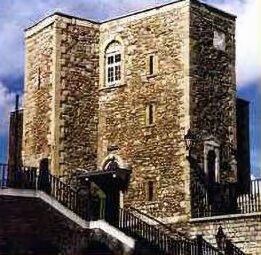 There has been one near successful attempt to steal the Crown Jewels, this took place in 1671 and was masterminded by Colonel Blood. Blood was an Irish adventurer, who already had several daring exploits to his discredit, one of which was a plot to seize Dublin Castle. At the time of the Restoration his lands had been confiscated, leaving him bitter and penniless.

Blood's plan commenced by making himself familiar to the Assistant Keeper of the Jewels, a seventy-six year old ex-soldier called Talbot Edwards who lived with his wife and family in the Martin Tower (left) at the Tower of London. To supplement his wages, Talbot was allowed to show the jewels to visitors for a fee. Dressed convincingly as a parson, Blood came accompanied with a woman whom he addressed as his wife. She expressed a wish to see the crown and Edwards obliged. At this time the jewels were stored in a cupboard behind a wired grille in the Martin Tower. Having seen the jewels, the lady was seized with a violently upset stomach. This gained the pair admission to Edwards' private apartments, where the kindly Edwards lead them and allowed her to recuperate on a bed. 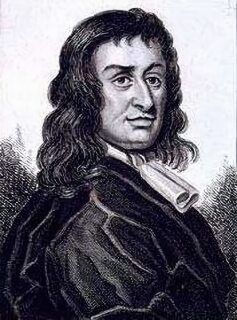 The 'parson' returned a few days later, bringing a gift of a pair of gloves as a gesture of thanks to Mrs Edwards, he was warmly received by the unsuspecting couple and invited to call again. The next time he did, Blood remarked that the Edwards had a daughter of marriageable age and raised the possibility that a marriage could be arranged between her and a nephew of his, whom, to whet their appetite, he added, was possessed of three hundred a year in land. The gullible Edwards' expressed themselves very interested and invited their visitor to come for dinner a few days later.

During his following visit, Blood piously said grace over the meal and expressed his admiration for a case of pistols, which he persuaded Edwards to sell to him. He arranged to return with the prospective husband on the morning of 9th May. He duly arrived on the appointed day, accompanied by his 'nephew' (in reality his son.) and two others, whom he introduced as friends. His wife would be arriving soon, he explained and in the meantime, to while away the time, he suggested that Edwards showed them the jewels. As Edwards reached the bottom of the stairs, he was overwhelmed and gagged. The old man struggled to free himself and made as much noise as he could. He was knocked about the head with a mallet, bravely, he continued to vigorously resist until one of the villains stabbed him in the stomach.

They then set to work removing the regalia from the cupboard and concealing them under their clothing. Blood himself crushed the crown to make it less conspicuous under his parsons cloak. Just as it looked likely that their audacious plan was likely to succeed, Edwards' son returned unexpectedly and raised the alarm. The gang was captured as they tried to get away and all the jewels recovered.

Edwards was promised a reward of two hundred pounds but never received it, the unfortunate man died of his wounds shortly after. Blood himself fared much better , King Charles II, intrigued by accounts of his exploits, wished to see the famous rogue. Disarmingly, he was never punished and was restored to his confiscated estates in Ireland, which lead to whispers that the merry monarch himself was involved in the plot in some underhand way. John Evelyn gathered that Colonel Blood had been taken into the Kings service as a spy.

The Welsh Crown Jewels
Back to Top