Residence of the British monarchs

Buckingham Palace has been the official residence of seven generations of British monarchs from the House of Hanover to the present reigning House of Windsor. The palace is now open to the public on a regular basis. 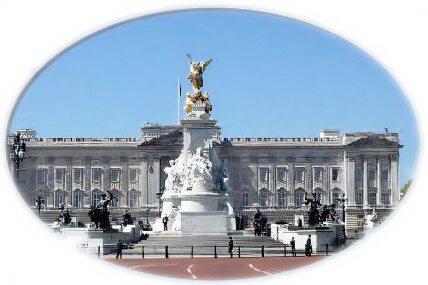 The original Buckingham House, as it was then known, stood on the site of what was formerly a mulberry tree garden established by King James I, in an ill-advised and failed attempt to cultivate silkworms. The building was purchased for £21,000 in 1762 from Charles Herbert Sheffield by King George III as a private home for his wife Queen Charlotte of Mecklenburg-Strelitz. It had previously been owned by the Dukes of Buckingham and had been built in 1702.

The couple's extravagant eldest son, George IV, gave the house an extensive and costly transformation. He employed the famous John Nash as his architect . George IV's brother and successor, King William IV, detested the building and was never to live there.

Queen Victoria, who ascended the throne in 1837, was the first British monarch to actually live in the palace. She embarked upon enlargements to accommodate her growing family. The East Front was added in 1847 and the famous Marble Arch, which formerly stood over the entrance to the Palace, was moved to its present position near Hyde Park. Her successor, Edward VII, introduced electric lighting and other modernisations.

George VI, the present Queen's father, referred to the palace as "the icebox". During the Second World War, Buckingham Palace was hit by German bombers nine times, leading Queen Elizabeth to state "Now I can look the East End in the face." 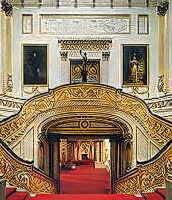 Buckingham Palace is entered through the impressive Grand Hall, which has ivory painted walls with gilded coving and marble columns. Two grand broad marble staircases lead up to the State Apartments. The ornate staircase balustrade is of bronze and portraits of members of the House of Hanover line the walls, they were arranged there by Queen Victoria in 1837.

The first of the State Apartments is the large and magnificent Green Drawing Room, which is entered through mirrored doors. It was redecorated in the 1830's, in the reign of William IV. Queen Adelaide, his consort, was responsible for choosing the decor, she requested that Irish people should The Green Drawing Room 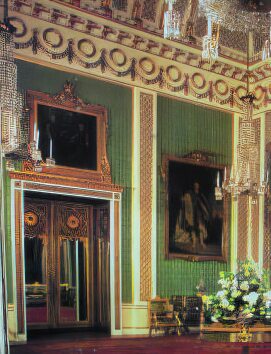 be employed in the production of the green tabinet fabric which lines its walls.The porcelain on display in the room, was purchased by George IV after the French Revolution.

The Throne Room is decorated in scarlet. The thrones are situated upon a dais at the far end of the room and were those used by Elizabeth II and the Duke of Edinburgh at the Queen's coronation in 1953. Flanking the thrones are four magnificent giltwood trophies, which originate from Carlton House, the London home of George IV.

The large Ballroom, a Victorian addition, measures over 36 metres long by 18 metres wide and was opened in 1856. It is now used mainly for State Banquets, but also as a concert hall and a for investitures.

The Palace Music Room, originally the Bow Drawing Room, has a distinctive high domed ceiling, arched windows and deep blue columns painted to appear like lapis lazuli. This room was used for the baptisms of Prince Charles, Princess Anne, Andrew, Duke of York and most recently, Prince William, all, in turn, wearing the Honiton lace robe that had been made for Queen Victoria's eldest daughter. Princess Diana, when she first took up residence in the palace in the early days of her marriage, practised her dancing steps in the room. 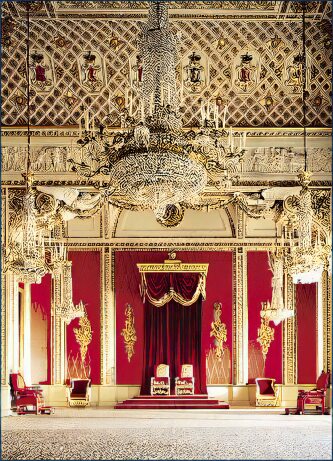 The 150 feet long Picture Gallery was re-roofed by Queen Mary, consort of George V, in 1914. The curved glass ceiling displays the paintings in a good, clear light. The gallery contains works belonging to the magnificent Royal Collection by Rembrandt, Van Dyck, and Rubens amongst many other famous artists.

The Blue Drawing Room boasts thirty Corinthian columns painted to resemble onyx. The room derives its name from its turquoise flock wallpaper and blue satin furnishings. A large State Portrait of the Queen's grandfather, George V is on display in the room.

The White Drawing Room is one of the most attractive rooms in the palace, decorated in white and gold. The upholstery is in gold. It has a concealed entrance, a huge mirror with a cabinet fixed to it, through which the royal family make their dramatic entrance. The room contains a large portrait of the beautiful Queen Alexandra, by Francois Flameng. Alexandra, the Queen's great-grandmother, known in the family as Alix, was the wife of Edward VII and daughter of Christian IX of Denmark.

The last room in the series of State Apartments is the magnificent red and gold State Dining Room. The room was not completed until after the death of William IV, and accordingly bears the cypher of Queen Victoria on many of the medallions adorn its walls.

The ceiling has three distinctive domes and its walls are lined with royal portraits depicting the Queen's ancestors of the Hanoverian dynasty, including George IV and his parents George III and Charlotte of Mecklenburg-Strelitz, as well as Frederick, Prince of Wales, the father of George III, was detested by his parents.

Security at the palace obtained a much-needed update after the intruder Michael Fagan entered the building through an open ground floor window and actually succeeded in reaching the Queen's bedroom. The startled and deeply shocked Queen awoke to find Fagan sitting in her room, the very depressed young man was clutching a broken ashtray with which he intended to slash his wrists. Highly alarmed, she pressed an emergency button by her bed to summon the police.

Exhibiting a great deal of her customary self-control, the Queen managed to collect herself and listened to Fagan's problems. Having received no response whatever to her first appeal for help, the alarmed monarch made a second, and finally used Fagan's desire for a cigarette to summon a maid. They were joined by a footman, who ushered Fagan into a pantry until the arrival of the police. There have been further breaches of security at Buckingham Palace since then, but none quite so serious or potentially alarming.