Elizabeth II, eldest daughter of Albert, Duke of York later George VI and Lady Elizabeth Bowes-Lyon was born in London on 21st April 1926 at 17, Bruton Street, Mayfair, the London home of her maternal grandparents, Claud, Earl of Strathmore and Nina Cecilia Cavendish-Bentinck. In accordance with the accepted custom since the birth of James II's son, the Catholic Old Pretender, in 1688, the Home Secretary was present.

Queen Elizabeth as a child 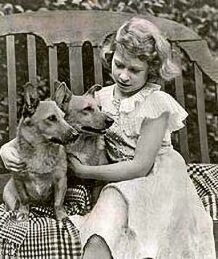 The new arrival was christened Elizabeth Alexandra Mary in the Music Room at Buckingham Palace, by the Archbishop of Canterbury, Cosmo Gordon Lang. Mary was the name of her grandmother, Mary of Teck and Alexandra that of her great-grandmother, the beautiful Alexandra of Denmark.

The baby Elizabeth was not in the direct line of succession and it was at the time assumed that her father's older brother the charismatic and popular David, Prince of Wales, would marry and produce children eventually. The York family was completed on the birth of a second daughter, Princess Margaret Rose on 1st August 1930 at Glamis Castle in Angus, Scotland. Elizabeth was a great favourite with her paternal grandparents, George V and Queen Mary, the King, in particular, doted on Lilibet, as she was known in the family, although inclined to be gruff with others, he was excessively fond of her. She experienced a secluded childhood and was educated by a Scottish governess, Miss Crawford, within palace walls and later by the Provost of Eton.

On the abdication of her uncle, Edward VIII, in 1936, her father unexpectedly succeeded to the throne as George VI.

During the Second World War, Elizabeth was allowed by her parents to be called up for national service with the A.T.S, her first experience of being able to mix with ordinary girls. She served as Second Lieutenant Elizabeth Windsor. On VE night in 1945, Elizabeth and Margaret were allowed to mingle with the celebrating crowds outside Buckingham Palace, an experience both thoroughly enjoyed and for once we're not recognised as they joined in the spirited revelries with enthusiasm.

As a teenager, Princess Elizabeth began to assume some official royal engagements. On the occasion of her twenty-first birthday, she made a speech dedicating her life to the service of her future subjects.

Before the end of the war years, Princess Elizabeth fell in love with the blonde and handsome Prince Philip of Greece, her father, George VI, although he liked Philip, would not at first give his consent for the marriage, doubting whether his daughter's affections would remain fixed on the first young man she had met.

In the intricate web of royal genealogy, Philip was twice Elizabeth's cousin, being also descended from Queen Victoria, as are many of the royal houses of Europe. He was the son of Prince Andrew of Greece and Denmark and Princess Alice of Battenberg. The Greek Royal House were an offshoot of the Danish Oldenburg dynasty, who were invited to take up the throne of Greece.

Philip's mother, Princess Alice, was the granddaughter of Princess Alice, the second daughter of Queen Victoria, who had been married to Louis, Grand Duke of Hesse, making the couple third cousins of their shared English descent. They are also second cousins once removed by their shared descent from the House of Denmark. The Queen's great-grandmother, Alexandra of Denmark, was the sister of Philip's grandfather, Prince William of Denmark, later to become George I of Greece.

Philip had been born in Corfu on 10th June 1921, on a kitchen table at the villa of Mon Repos, but his family had been forced into exile. His parents drifted apart and his mother, who was deaf, suffered a severe breakdown, while his father adopted a playboy lifestyle.

Under the auspices of his maternal uncle, Lord Louis Mountbatten, Philip was educated in Britain at Gordonstoun, in Scotland and had later entered Dartmouth Naval College. Whilst on leave during war service he had become very interested in the young Princess Elizabeth. She accompanied her parents and sister on a tour of South Africa in 1947 and on her return, her feelings for Philip still constant, her father, at last, agreed to their engagement.

Elizabeth and Philip were married on 20th November, 1947, at Westminster Abbey. Phillip, who took his mother's Anglicized surname of Mountbatten, had become a naturalised British subject and had been created Duke of Edinburgh by his prospective father-in-law prior to the marriage. 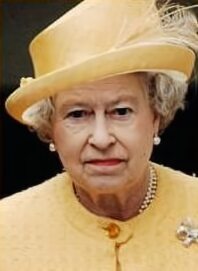 Elizabeth and Philip were on tour in a remote part of Kenya when George VI died in his sleep at Sandringham on 6th February 1952. The onerous task of informing her of her father's death and her consequent accession to the throne fell upon her husband. She was proclaimed Queen on the 8th of February, 1952. On the insistence of the Queen's grand-mother, Queen Mary, it was announced that the Queen and her heirs should continue to be known as the House of Windsor, to carry on the name of the dynasty founded by her husband, George V. The decision irked the forthright Philip, who is reported to have angrily exclaimed "I'm a bloody amoeba!". 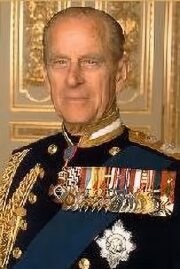 Elizabeth II's reign has witnessed the dismantling of the British Empire. Prince Philip has attempted to modernise the ancient institution of monarchy, he reorganized the royal household, instituted the Duke of Edinburgh Award scheme and more controversially, allowed an informal television film to be made covering the royal family's lifestyle.

The Queen and Prince Philip produced what is sometimes known as their second family after her accession to the throne, Prince Andrew Albert Christian Edward, later created Duke of York, was born in 1960 and was followed by the birth of Prince Edward Anthony Richard Louis, later Earl of Wessex, in 1964.

A further declaration was issued by the Queen regarding the family surname in 1960 stating that while she and her heirs would continue to be known as the House of Windsor, her descendants not inheriting the throne would take the surname Mountbatten-Windsor. It has been made known that on the death of the Queen and her husband, Prince Edward will succeed to his father's title of Duke of Edinburgh.

The assassination of Philip's uncle, Lord Mountbatten, by the provisional IRA in 1980, shook the royal family to the core, particularly affecting the sensitive Prince Charles. Mountbatten had been spending a family holiday at his second home of Mullaghmore, County Sligo, when a bomb, which had been planted on his boat in Donegal Bay had exploded. Prince Charles had shared a particularly close relationship with his great-uncle and mentor, referring to him as his "honorary grandfather", he was known to find communication with his father difficult. Mountbatten was given a state funeral at Westminster Abbey at which a visibly shaken Charles read the lesson.

The behaviour of some of the younger members of her family has often evoked criticism of the monarchy and the marital relations of her children have often been the cause of endless negative media attention. Princess Anne, married to Captain Mark Phillips, divorced in 1992. Since the Church of England forbade the re-marriage of divorcees but the Church of Scotland did not, Anne married for a second time to Commander Timothy Lawrence at Crathie Kirk in Scotland, near the Queen's Balmoral estate in Aberdeenshire. 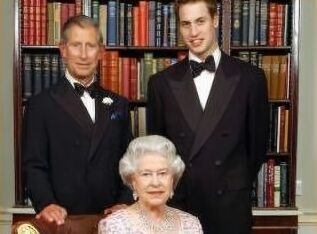 This was followed by the very public collapse of the marriage of Andrew, Duke of York to Sarah Ferguson. Scandal threatened to engulf the House of Windsor when the tabloids published photographs of the Duchess of York, topless and in compromising positions with her 'financial advisor', John Bryan.

The marriage of the Prince of Wales to Lady Diana Spencer ran into difficulties even in its early stages. Ill matched from the outset, both partners had engaged in extra-marital affairs and their marriage had become little more than a sham, endured for the benefit of the public. Their problems were endlessly very publicly aired and Charles infidelities exposed in a book by Andrew Morton, with whom the Princess collaborated.

The Queen and the Duke of Edinburgh 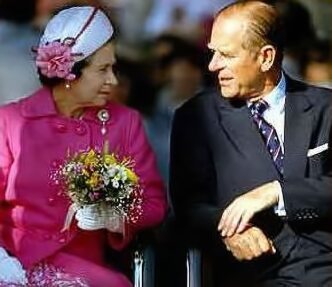 The Prince and Princess of Wales drew the monarchy into further disrepute by their ongoing feud and public point-scoring over each other, which the press dubbed the War of the Waleses. After the Princess appeared on the television programme, Panorama, admitting involvement in Morton's book and an affair with an army officer, Major James Hewitt, the Queen advised them to divorce, for the sake of their children and to limit the escalating damage to the monarchy.

The marriage of the Prince and Princess of Wales ended on 28th August 1996. On the death of the much loved and immensely popular Diana in a car accident in Paris on 31st August 1997, the Prince of Wales' popularity reached its nadir. He and the royal family came under criticism for what the public perceived as its ill-treatment of Diana and they were accused by the press of being cold and unfeeling, slow to react to and out of tune with the feelings of the nation.

The Queen has striven since then to alter these perceptions of the royal family and despite the marital difficulties of her children remains an uncontroversial figure. Now in her eighties, she has acquired the respect of most of her subjects for the dedicated and dutiful manner in which she has carried out her often difficult role.

Now in her nineties, she has acquired the respect of most of her subjects for the dedicated and dutiful manner in which she has carried out her often difficult role.

Amidst the growing family crisis triggered by the Duke and Duchess of Sussex' interview with Oprah Winfrey Prince Philip was admitted to King Edward VII's Hospital after feeling unwell. He was visited there by his eldest son Prince Charles. A successful operation for his heart condition was carried out. After spending a month in hospital he was discharged, returning to Windsor Castle to be with the Queen.

The prince died peacefully at Windsor Castle on 9 April 2021, aged 99. He was the longest-serving royal consort in British history. The queen was by his side at the end. His most important role has been as a loving and supportive husband.

The Ancestry of Queen Elizabeth II