During a holiday in Scotland with her husband Prince Albert, Queen Victoria fell deeply in love with the evocative Highland scenery, announcing that Scotland was " the proudest, finest country in the world" she decided to acquire a home there. Albert also felt inspired by the dramatic mountain scenery, which reminded him of his native Coburg in Germany, for which he had often felt homesick. 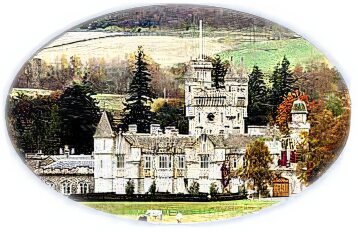 They rented Balmoral Castle, which stands in magnificent scenery in the shadow of Lochnagar, from its then owner, the Duke of Fife. Located in the Dee Valley in Aberdeenshire, six miles from Braemar, the castle already boasted royal connections, Robert II, King of Scots, had owned a hunting lodge there in the middle ages. ,br> The Queen purchased the castle and estate in 1852 for £31,000, with money bequeathed to her in the will of the wealthy and eccentric John Camden Nield, who left half a million pounds (the equivalent of 24 million pounds today) to "Her Most Gracious Majesty Queen Victoria, begging Her Majesty's most gracious acceptance of the same for her sole use and benefit". Her diary for 1852 records "A very handsome fortune had inexplicably been bequeathed to me by a Mr John Camden Nield. He knew I would not squander it". She ensured that his servants were well provided for and in 1855, had a stained glass window installed in his honour at North Marsden church, as well as carrying out repairs to the church roof.

The royal couple decided to demolish the existing fifteenth century castle and erect a new one. The Scottish baronial style castle, with pepper pot turrets, which replaced it was completed by 1856, Albert participated in the design. Queen Victoria's journals refer to Balmoral as " My dear paradise in the Highlands" The industrious Prince Albert even designed a Balmoral tartan.

After the death of her beloved Albert in 1861, from which she was never to properly recover, Victoria suffered a breakdown and became somewhat reclusive. She began to spend more and more time at her beloved Balmoral, she relished the solitude, which calmed her shattered nerves. The scandal threatened to engulf her, when during this time, much to the chagrin of the Prince of Wales, she formed an emotional attachment with John Brown, her Highland servant, leading to the Queen being popularly referred to as Mrs Brown. However, it is unlikely that there was anything in the relationship other than the companionship that the lonely and emotional Victoria craved.

On the death of Queen Victoria in 1901, the castle and estate passed, by the terms of her will, to Edward VII and succeeding British monarchs. Today it is the private home of Elizabeth II and the Queen and her family occupy Balmoral throughout the summer holiday period.

Victoria's original 6,350-acre estate has been expanded to its present 50,000 acres which include some truly panoramic scenery. The estate includes Ballochbuie Forest, the largest remnant of the ancient Caledonian Forest. Loch Muick and Lochnagar Wildlife Trust was established with the Scottish Wildlife Trust in 1974 and a visitor centre was built on the site.

The ballroom is the only part of the castle itself where the public are admitted. It contains various paintings, porcelain and silver and displays of Highland dress. There is also a cafeteria and a shop selling a wide range of souvenirs.