Magnificent Windsor Castle in Berkshire is the oldest and largest occupied castle in the world. Steeped in nine hundred years of history it dominates the surrounding landscape and emanates an impression of power. The castle is one of the Queen's three official residences, the other two being Buckingham Palace and Holyrood House.

The castle was founded by the Norman king, William the Conqueror in 1075. Erected as a wooden motte and bailey castle on the site occupied by the present Round Tower. The Conqueror's Castle was situated in a strategic defensible position, standing on a hill above a bend in the River Thames at the village of Windlesora, which once formed part of a Saxon royal hunting ground.

The castle was extended by his successors throughout the centuries that followed. William the Conqueror's fourth son, king Henry I replaced his father's original wooden structure with a stone keep. The Round Tower was added by the Conqueror's great-grandson, King Henry II, the founder of the Plantagenet dynasty, who replaced the wooden palisade surrounding the old fortress with a stone wall interspersed with square towers. Henry II also built the first stone keep on the irregular mound at the centre of the castle and the first of the castle's medieval state apartments. 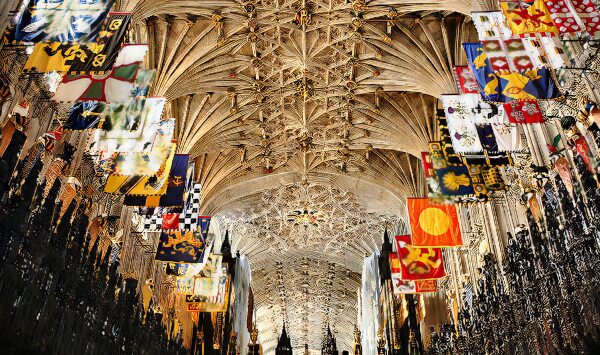 Windsor castle was to experience two sieges in the medieval era. The first occured when the scheming Prince John attempted to take the throne from his absentee brother, Richard the Lionheart whilst the latter was taking part in the Third Crusade to the Holy Land. Windsor was again besieged by the nobles as part of the insurrection which culminated in King John being forced to sign the historic Magna Carta at nearby Runnymede meadow, which is located three miles along the River Thames from Windsor towards London.

Edward III lavished £30,000 on Windsor Castle, the largest crown building project of the Medieval period. He created St. George's Hall, for the use of the knights of the Order of the Garter which he founded on St. George's Day, 1348. Every June, an official gathering of the knights of the Garter takes place at the castle. Following a meal in the Waterloo Chamber, the knights walk in procession headed by the Queen and the Duke of Edinburgh, to a service in the chapel.

The massive and magnificent perpendicular gothic St. George's Chapel was begun by Edward IV in 1477and completed fifty years later in the reign of his formidable grandson, Henry VIII. It is the burial place of ten British monarchs. Henry VIII and his third wife, Jane Seymour, lie there together with Charles I, beheaded on the orders of Oliver Cromwell in 1649 during the Civil War. Charles was brought captive to the castle by Parliamentary forces prior to his execution in 1649. His body, along with its severed head was later placed in his bedroom, before being buried in the chapel. 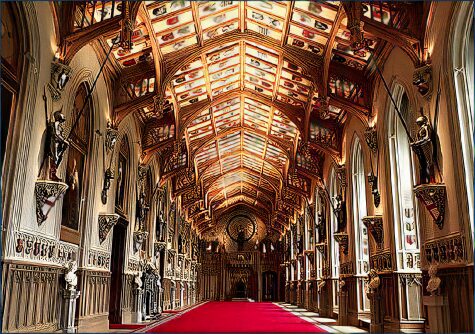 The chapel remains one of the finest examples of late medieval architecture and has been the scene of many royal marriages, the latest of these being the wedding of the Earl and Countess of Wessex in 1999.

Following the restoration of the monarchy in 1660, a new set of State Apartments were built by the Stuart king Charles II, who loved the castle. Charles transformed the medieval castle into a Baroque palace. He rebuilt much of the upper bailey. His apartments were embellished by the work of the famous woodcarver, Grinling Gibbons and include ceilings by Antonio Verrio. Charles also added the 5 km Long Walk, leading south from the castle to Windsor Great Park.

That most avid of royal builder's, George IV, had extensive alterations made to the castle in the 1820s. He chose the architect Jeffry Wyatville to built the famous Waterloo Chamber, commemorating the defeat of Napoleon at the Battle of Waterloo in 1815, which is lined with Sir Thomas Lawrence's famous state portraits of the potentates of the time.

When her beloved husband Albert, the Prince Consort died at Windsor Castle of typhoid in 1861, rumoured to be caused by the state of its drains, Queen Victoria erected the ornate mausoleum at Frogmore, which stands in the grounds of Windsor Great Park, to his memory. She and a number of their descendants, including Albert Victor, Duke of Clarence and Avondale, older brother of George V, now lie at Frogmore with him.

A disastrous fire broke out at the castle on 20 November 1992, ironically the 45th wedding anniversary of the Queen and the Duke of Edinburgh. It started in the Private Chapel when a spotlight placed there by workmen ignited a curtain and spread rapidly to engulf many of the State Rooms. The fire lasted for fifteen hours destroying nine of the principal State Apartments.

The Round Tower, Windsor Castle and cottages accommodating castle staff 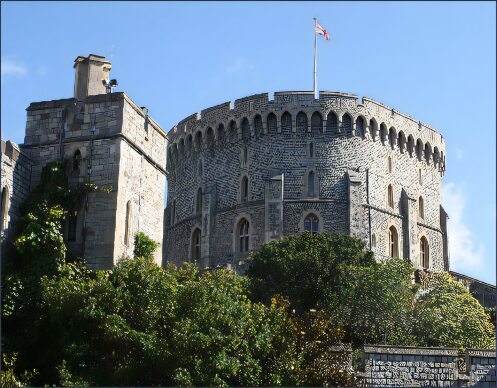 An extensive restoration programme was embarked upon, using authentic materials and craftsmanship. Restoration works were completed five years later, on 20th November, 1997 at a cost of 37 million pounds. A large percentage of the money (70%) was raised by opening Buckingham Palace to the public. 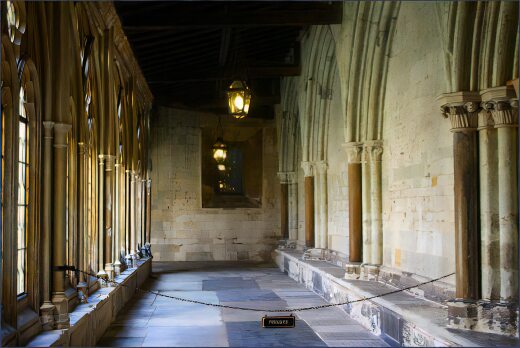 The State Apartments are open to visitors. Windsor houses the major artworks in the royal collection which includes works by Holbein, da Vinci, Rubens, Rembrandt and van Dyck. 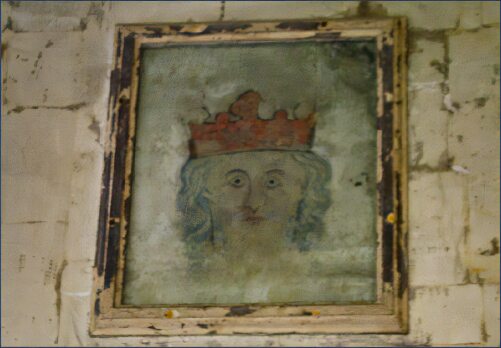 The royal family visit Windsor frequently, the Queen regularly spends weekends there and it is used for ceremonial visits from Heads of State.