Prince George Frederick Augustus, the eldest son of George III and Charlotte of Mecklenburg-Strelitz, was born at 7.45 p.m. on 12th August, 1762 at St. James' Palace, London. The first heir born to a reigning monarch for three quarters of a century. Five days later he was created Prince of Wales by his delighted father. He was to be the eldest of a further fourteen children born to George III and his consort. 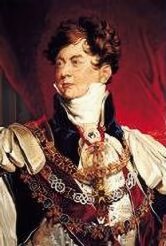 George was a handsome and intelligent child and was competent at French, German and Italian, enjoyed Shakespeare and had some ability in music. His spelling was reported to be poor.

At the age of 18 the Prince of Wales was given a separate establishment, and in dramatic contrast with his dutiful father, threw himself with enthusiasm into a life of wild extravagance involving heavy drinking and escapades. He indulged in a teenage affair in 1779, with the celebrated actress Mrs Mary Robinson, after watching her play Perdita in 'A Winter's Tale'. Her royal suitor showered gifts on her, but the affair did not last, coming to an end in the spring of 1781. Mrs Robinson retained some of the Prince's more amorous letters, which George III had to pay a reported five thousand pounds to recover to avoid scandal. As a young man, George became a leading figure in fashionable society and was known as the first gentleman of Europe for his polished and refined manners. His censorious father strongly disapproved of his extravagance, mounting debts and political associates. George in turn loathed his father and the typical Hanoverian fractious pattern between the King and his eldest son was established early on in their relationship. 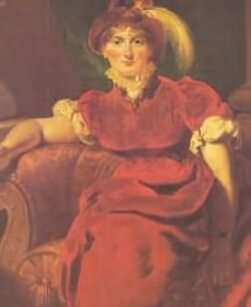 Much to his father's chagrin, he contracted a secret marriage to Maria FitzHerbert, a Catholic widow, whom he had become obsessively enamoured of, but who refused to become his mistress. Since it contravened the Royal Marriages Act the marriage was illegal. On 23 June 1794, Maria was informed by letter that her relationship with the Prince was over. George told his younger brother, Prince Frederick, Duke of York and Albany, that he and Maria were "parted, but parted amicably", informong him of his intention to marry their first cousin, Princess Caroline of Brunswick. His father, King George III, considered it was the only way out of an awkward situation, George's massive debts of £600,000 were to be paid the day he married.

In 1795 George was forced to marry Caroline of Brunswick , to induce Parliament to pay his huge debts. Caroline was the daughter of his aunt, Princess Augusta Charlotte of Wales and Charles William, Duke of Brunswick-Wolfenbuttel. She was not a particularly attractive woman, was course and neglected personal hygiene. On first sight of his future wife, George was thoroughly dismayed and in a state of shock, "I am not well", he announced, "pray get me a glass of brandy," The marriage ceremony proceeded as arranged, attended by his well-pleased father, on the evening of 8th April 1795 at the Chapel Royal at St. James' Palace. The bride wore an elaborate dress of silver tissue and lace and a velvet robe lined with ermine. The distraught bridegroom spent his wedding night lying on the bedroom floor by the fireplace in a drunken stupor.

Although he was repelled by his wife, George eventually did his duty and brought himself to consummate the marriage and the Princess of Wales gave birth to a daughter and heir to the throne, Princess Charlotte, on 7th January 1796. After the birth of the child, George promptly abandoned Caroline. The Princess of Wales was forbidden to see her daughter on a daily basis and in 1799 was banished. She went to live abroad, inviting scandal by taking lovers and running up vast debts.

For the last ten years of his father's reign, due to the deterioration in the King's mental health, (possibly as the result of the hereditary disease porphyria), George was appointed Prince Regent. He was to become a lavish, even extravagant patron of the arts and possessed both charm and taste. George was an avid reader of the novels of Sir Walter Scott and Jane Austen. He established a superb collection of paintings and had a keen interest in architecture. The Brighton Pavilion was commissioned, on which no expense was spared, which made him deplored by the country who ultimately had to foot the bill. 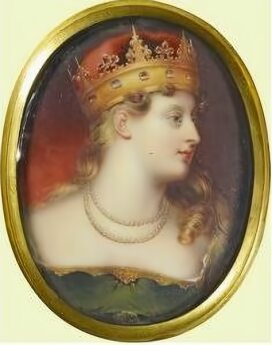 After a failed attempt to force her into a marriage with the Prince of Orange, whom she loathed, the Regent married his daughter and the heiress to the throne, Charlotte, to Leopold of Saxe-Coburg- Saalfield, her own choice as a husband.

After two miscarriages, Charlotte became pregnant with what was hoped would be a grandson and the heir in the next generation to the British throne. She went into labour on 3rd November, 1817. The Prince Regent was summoned and hurried to be present when the labour proved to be difficult and protracted, Caroline's ordeal lasted for for fifty hours. Finally the child was born at nine o'clock on 6th November, a boy, born dead. The sad news was related to George on his reaching Carlton House, being told that his daughter herself was doing well, he retired exhausted to bed.

Though the mother seemed at first to be recovering well from her horrendous ordeal, she complained that evening of severe stomach pains and began to vomit. She later developed a pain in her chest, before going into convulsions. It has been suggested that Charlotte died as a result of porphyria, inherited from her grandfather, George III.

Soon after the Regent was awoken by his brother, the Duke of York and informed that his only daughter was dead. Highly emotional by nature, George was extremely distraught. The following day he went to visit his bereaved son-in-law at Carlton House. In contrast to the sad but composed Leopold, George was overcome and worked himself into a very stressed condition, which was the cause of further alarm.

George's recovery from his bereavement was slow, he became somewhat reclusive and dwelled excessively on the shock of the sad event which had overwhelmed him. Charlotte's obstetrician, Sir Richard Croft was widely blamed for the Princess' death and was said to have been negligent. Both the Regent and Prince Leopold publicly exonerated him from blame, but the damage to his reputation was done and eighteen months later Croft shot himself.

George's cup of sorrow was not yet full. The death of Charlotte was followed in 1818 by that of his mother, Queen Charlotte, he felt her death deeply, as they had enjoyed a very close relationship, she had, for many years been his confidante. George was with her, holding her hand, when she died on 17th November. He greatly missed her support and was characteristically extremely affected by her death.

George became King when his father George III died at Windsor, aged 81, on the evening of 29th January 1820. George IV was then aged 57, by the time of his accession, he was obese and possibly addicted to the pain reliever, laudanum. An ostentatious and magnificent coronation was arranged. Caroline of Brunswick, who was vulgar and profligate, now saw herself as Queen of England. To George's consternation, she promptly returned from the continent where she had caused a scandal by openly living with her Italian lover, Pergami. She was given a rousing welcome at Dover. The people identified with a woman who had been wronged by their unpopular King and she proceeded to London where she was met with cheering from the populace. 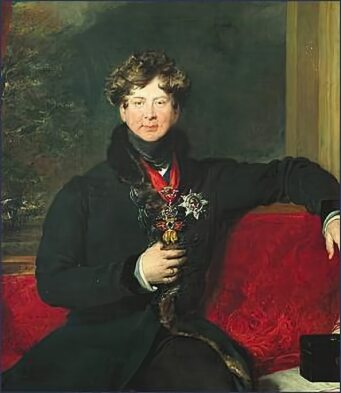 Caroline was put on trial by the House of Lords, to determine her adultery with Pergami, but this remained unproven, thus depriving George IV of a means to have his despised marriage annulled. On the day of the coronation, 19 July 1821, Caroline turned up at Westminster, planning to attend the coronation service as queen, but on arrival at the abbey she was turned away and suffered the indignity of being refused entry at both the doors to the East Cloister and West Cloister, she then attempted to enter via Westminster Hall. An onlooker described how the Queen stood at the door fuming until the doors were slammed in her face. Caroline, undeterred, then proceeded back to an entrance near Poet's Corner, where she was persuaded to return to her carriage, after which she eventually left, to be jeered by the crowds as she drove away. . She died later that year and had engraved on her coffin 'Caroline of Brunswick, the injured Queen of England.'

The King embarked on an extensive programme of repair and refurbishment at Windsor Castle in 1824. His architect Sir Jeffry Wyatville swept away the last traces of the medieval fortress. A series of state apartments were created and the Waterloo Chamber was built. He also employed architect John Nash to rebuild what was then known as Buckingham House, turning it into the Buckingham Palace we know today.

George kept a series of mistresses including Grace Elliott, the divorced wife of a physician and Frances Villiers, Countess of Jersey, who dominated his life for some years. In later life, his mistresses were the Marchioness of Hertford and the Marchioness Conyngham, both of whom were married.

He was rumoured to have fathered several illegitimate children. James Ord (born 1786)-who moved to the United States and became a Jesuit priest, was said his son by Maria Fitzherbert. The King, late in his life, told a friend that he had a son who was a naval officer in the West Indies, whose identity has been tentatively established as Captain Henry A. F. Hervey (1786-1824), reportedly George's child by the songwriter Lady Anne Lindsay, a daughter of the 5th Earl of Balcarres. Other reported offspring include Major George Seymour Crole, the son of theatre manager's daughter Eliza Crole or Fox; William Hampshire, the son of publican's daughter Sarah Brown; and Charles "Beau" Candy, the son of a Frenchwoman with that surname. Anthony Camp, Director of Research at the Society of Genealogists, has dismissed the claims that George IV was the father of Ord, Hervey, Hampshire and Candy as fictitious.

The Death of George IV

From 1824 onwards, George IV suffered badly from gout and to relieve the pain, he took ever-increasing doses of laudanum. Now vastly overweight and ageing rapidly, he became highly sensitive to the inquisitive gaze of his subjects and grew ever more reclusive. George's heavy drinking and indulgent lifestyle had taken their toll on his health. Due to huge banquets and copious amounts of alcohol, he had become obese, making him the target of ridicule on the rare occasions that he appeared in public. By 1797 his weight had reached 17 stone 7 pounds and by 1824 his corset was made for a waist of 50 inches (130 cm). He suffered from gout, arteriosclerosis, peripheral oedema ("dropsy"), and possibly porphyria. In his last years, he spent whole days in bed and suffered spasms of breathlessness that would leave him half-asphyxiated.

In 1828, his eyesight started to fail, he began to suffer from weakness and insomnia and bouts of breathlessness and his legs became grotesquely bloated with dropsy. By the spring of 1830, George's imminent end was obvious. Attacks of breathlessness due to dropsy forced him to sleep upright in a chair, and doctors frequently tapped his abdomen to drain excess fluid. George died on 26th June 1830. A postmortem examination revealed that the King had been suffering from arteriosclerosis for many years, the immediate cause of death was the rupture of a blood vessel in the stomach. A large tumour "the size of an orange" was found attached to his bladder, and he had an enlarged heart surrounded by a large fat deposit and a heavily calcified heart valve.

George IV was buried at Windsor and was succeeded by his brother, William IV.