One of the most memorable and endearing of English monarchs, Queen Victoria was born on 24th May 1819, at Kensington Palace, London. She was the daughter of Edward Augustus, Duke of Kent (the fourth son of George III) and Victoria of Saxe-Coburg-Saalfield. Her parent's marriage was one of a series of arranged marriages amongst the sons of George III, to produce an heir in the next generation after the untimely death in childbirth of George IV's only child, the popular Princess Charlotte... 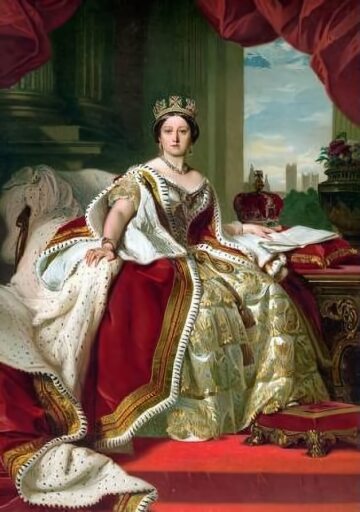 Victoria's christening took place at Kensington Palace and was the cause of much friction within the family. The Prince Regent detested his brother the Duke of Kent and the thought of a child of the Duke's inheriting the throne was anathema to him. Although he was asked to stand as godfather at the ceremony, he would allow no uniforms or foreign dignitaries to attend to add splendour to the occasion. 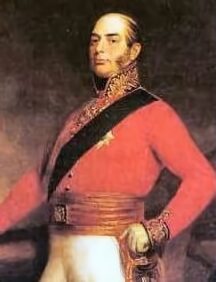 He forbade the use of the names Charlotte, Elizabeth, Georgina or Augusta, which the baby's parents had chosen. It was clear that the Regent would not allow the child to be given any of the names which were then used in the royal family. When the Archbishop enquired what name he should therefore give the child, the Regent abruptly snapped "Alexandrina", which was after the Russian Emperor, who stood as godfather by proxy. The child was christened Alexandrina Victoria. During her first years, the Princess was often called Drina but Victoria was the name she herself preferred.

Eight months after his daughter's birth, the Duke of Kent died when a heavy cold turned to pneumonia whilst the family were staying at Sidmouth in Devon. By the 1830's it had become obvious that Queen Adelaide was not going to produce a living child and therefore Victoria would succeed her ageing uncle, William IV, to the throne.

Her mother's ambitious Comptroller, the Irishman John Conroy, envisaged himself as the power behind the throne during the Princesses minority. He devised the Kensington System, under which she spent, to use her own words, her "rather melancholy childhood". The system was devised to bring up the Princess entirely dependent on her mother. A lonely and unhappy child, she was alternately bullied by Conroy and cajoled by her mother. Her only support came from her governess, Baroness Lehzen, whom the highly emotional Victoria became very attached to.

Conroy eagerly anticipated a regency, but his plans came to nothing, as on the death of William IV, Victoria had just passed her eighteenth birthday. She was awoken in the early morning of 20th June 1837, to hear the momentous news that she was now Queen. She later attended the first of many cabinet meetings "Quite alone". Most of those present were impressed by the gravity and dignity with which the new Queen conducted herself, despite her youth. Since Hanover was governed by the Salic law, which forbade the succession of a female, Victoria's uncle, Ernest Augustus, Duke of Cumberland, was to succeed as Elector of the province. Ernest Augustus was an unpopular and unsavoury figure who was rumoured to have murdered his valet.

The new Queen could hardly be described as pretty, she was short, dumpy and plain, with the receding chin of George III and typically Hanoverian features. She got off to a good start, guided by her first Prime Minister, the experienced Lord Melbourne, who saw himself as a surrogate father figure to the young Victoria and to whom she became quite attached. The propriety, decorum and dignity that Queen Victoria early displayed was in marked contrast to that of her profligate Hanoverian uncles.

At the outset of her reign, Victoria lost some of her initial popularity by her behaviour in the Bedchamber Crisis. Understandably harbouring resentment to her mother for her sufferings under the Kensington System, she allowed this to affect her judgement and handling of the affair of one of her mother's ladies, Lady Flora Hastings. 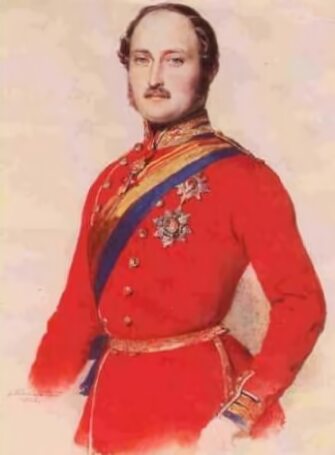 When Lady Flora became ill and swollen about the stomach, the Queen was all too ready to believe the gossip about pregnancy and Conroy. Lady Flora's reputation was besmirched and she had to submit to an embarrassing examination to clear her name. It transpired that the unfortunate woman had cancer. When she died shortly after, Victoria's reputation was at an all-time low.

Marriage to Albert of Saxe-Coburg-Gotha

It was expected that the new Queen would soon marry and produce an heir to the throne. Victoria was aware of the schemes of her maternal uncle Leopold of Saxe-Coburg for her to marry her first cousin Albert of Saxe-Coburg-Gotha, the younger son of Ernest, Duke of Saxe-Coburg-Gotha and Louise of Saxe-Altenburg. Leopold, the widower of George IV's daughter Charlotte and now King of the Belgians was intent on building up Coburg influence in Europe, through a series of advantageous marriages.

Although Victoria was not over keen to marry in a hurry, she was excessively fond of her "dear Uncle Leopold" who had visited her frequently as a child and had helped with her financial support. She agreed that Albert and his brother Ernest could come over to visit. She promptly fell for the "quite charming and excessively handsome" Albert, who accepted Victoria's proposal. The young couple were married on 10th May 1840.

The marriage did not get off to a very auspicious start. The Queen's new husband was disliked in England as a foreigner and generally disapproved of, a rhyme circulating at the time 'He comes to take, for better or for worse, England's fat Queen and England's fatter purse' aptly captured the public mood. In addition to this, Albert had to cope with his wife's emotionalism and the relentless interference in their marriage of Victoria's old governess, Baroness Lehzen, whom he grew to thoroughly detest.

Victoria was reluctant to share power with her husband and it seemed that the only position she was prepared to allow him was that of blotting her signature on state papers. These teething troubles were eventually addressed when Albert, a highly intelligent young man, quickly mastered the English language and increased his influence in state affairs. The Queen came to depend on his considerable abilities and became devoted to him. To Albert's delight, the despised Lehzen was soon packed off back to Germany.

Albert's influence became considerable. He applied himself and took an abiding interest in the exploitation of child labour and the housing conditions of the working classes. The Queen herself had little knowledge of the social problems that industrialization had created for the majority of her subjects and Albert did his utmost to draw such matters to his wife's attention.