Prince Edward, fourth son and fifth child of King George III and Charlotte of Mecklenburg-Strelitz, daughter of Duke Charles Louis Frederick of Mecklenburg-Strelitz and Elizabeth Albertine of Saxe-Hildburghausen, was born on 2 November 1767 and baptised Edward Augustus on 30 November 1767. He was named after his paternal uncle, the Duke of York and Albany, who had died several weeks previously.

Edward and his brother William 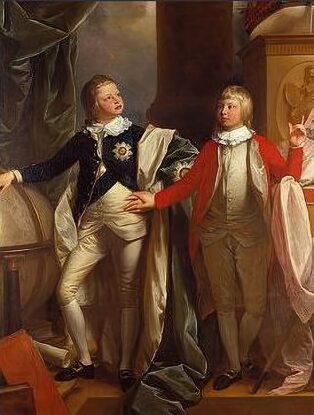 Prince Edward began his military training in Lüneburg in 1785 and later in Hanover, his preceptor from 1780 to 1785 was John Fisher, later bishop of Salisbury and an amateur artist. He completed his education in Geneva where he took a mistress, Adelaide Dubus, who died during the birth of their daughter Adelaide Victoria Auguste Dubus. The baby was placed in the care of Adelaide's sister Victoire. Prince Edward arranged for a pension of 50 guineas a year to be paid to Victoire and Denis Dubus for the remainder of their lifetimes, this pension came with the conditions that the child was forbidden to become an actress, would be raised in the Protestant faith and would be given back to Edward if he requested it. He is also said to have had an illegitimate son, Edward Schencker Scheener, who was born in Geneva, Switzerland, on 24 November 1789, whose mother was Anne Gabrielle Alexandrine Moré. 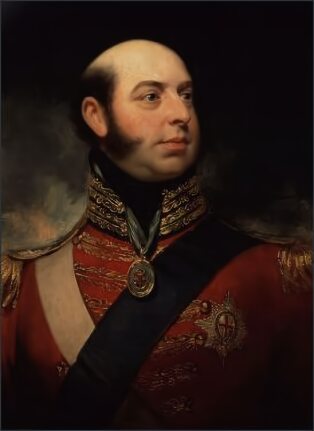 In 1789 at the age of 21, Edward was appointed colonel of the 7th Regiment of Foot. In 1790 he returned home without leave and, being in disgrace as a result, was sent off to Gibraltar as an ordinary officer. He was transferred to Quebec, Canada in 1791 and in 1793 was promoted to major-general in October 1793. The following year he served successfully in the West Indies campaign.

In late 1798, Edward fell from his horse and was allowed to return home to England. On 24 April 1799, his father the king created him Duke of Kent and Strathearn and Earl of Dublin. In May of the same year, he was promoted to the rank of general and appointed Commander-in-Chief of British forces in North America.

Appointed Governor of Gibraltar the Duke of Kent arrived on the island on 24 May 1802 with orders from the British government to restore discipline among the troops. His disciplinarian excesses resulted on 24 December 1802, in a mutiny by his regiment. When reports of the mutiny arrived in Britain the Duke was recalled but refused to return to England until his successor arrived. Although he was allowed to hold the title of Governor of Gibraltar until his death, he was never allowed to return there.

Following the succession crisis created by the death in childbirth of the Prince Regent's daughter, Princess Charlotte of Wales the only legitimate grandchild of King George III, the unmarried sons of the king the Duke and his brothers the Duke of Clarence (later King William IV), the Duke of Kent, and the Duke of Cambridge, all contracted marriages to Protestant German princesses in the hope of producing an heir to the throne. 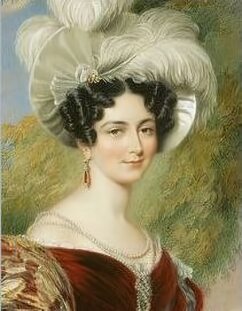 Madame de Saint-Laurent although upset, accepted the separation with dignity and continued to be maintained by the Duke. The newly married couple stayed with Victoria's mother, the Duchess of Coburg, for a period before returning to England to enable the child the Duchess was expecting, who would be heir to the throne in the next generation, to be born there.

The child was a girl, Princess Alexandrina Victoria of Kent, born on 24 May 1819 at Kensington Palace in London. Edward was intensely proud of his daughter, often boasting to friends that she would be the queen of England. She was christened by the Archbishop of Canterbury, on 24 June 1819 in the Cupola Room at Kensington Palace.

The child was named Alexandrina, in honour of her godfather, Tsar Alexander I of Russia, and Victoria after her mother. The names of Georgiana, Charlotte and Augusta, initially chosen by her parents, were vetoed by the Prince Regent (later George IV).

After the birth of his daughter, the Duke, in an attempt to manage his huge debts, sought to find a place where he and his wife and young daughter could live inexpensively. He leased Woolbrook Cottage on the seaside by Sidmouth in Devon from General Baynes.

The Duke of Kent contracted a heavy cold on the journey down to Devon that winter, less than a year after the birth of Victoria, which turned to pneumonia from which he died at Woodbrook Cottage on 23 January 1820. He was buried in St George's Chapel, Windsor, on 11 February. His widow the dowager Duchess of Kent returned to Kensington Palace, where she determined to bring up their daughter, the second in line to the throne, in England.

The Duke of Kent's daughter, who can have had no memory of him, succeeded to the throne as Queen Victoria on the death of her uncle King William IV in 1837.