George William Frederick, the future George III, was born prematurely at Norfolk House in London in the early morning of 4th June 1738. He was the son of Frederick, Prince of Wales and Augusta of Saxe-Gotha. George's father and his grandfather, George II had long experienced personal differences in a sad repetition of the familiar Hanoverian pattern established by George I and his heir.

George grew into a reserved and shy child. The family moved to Leicester Square, where George and his younger brother Prince Edward, Duke of York and Albany, were educated together by private tutors. Prince George showed himself to be especially fond of military history. His father, commonly known as Poor Fred, died on 20th March 1751 aged 48, unmourned by his parents, who both despised him. George became Heir Apparent at twelve years old. 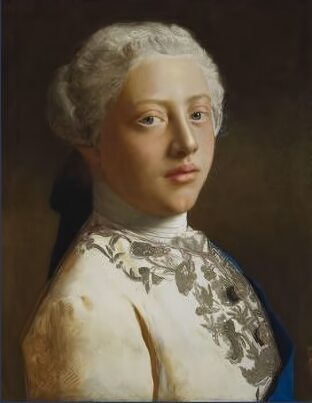 George's grandfather, King George II, disliked the Prince of Wales and had taken little interest in his grandchildren, however, after Frederick's death the king paid more attention to his eldest grandson, and three weeks later, created him Prince of Wales. The young George was initially subject to the dominating influence of his mother and her lover Lord Bute. His grandfather, George II, offered him his own establishment but George refused for the reason that his mother's happiness depended on their not being separated. He was not good looking, having a large nose, very full lips, the bulbous Hanoverian blue eyes and florid complexion and was inclined, even in youth, to plumpness. He was observed to possess an exacting sense of duty.

In his teens George met and fell passionately in love with a Quakeress, Hannah Lightfoot, from Execution Dock, Wapping-in-the-East. It was rumoured that George had several children by her and had actually married her. If this were the case it would render his later marriage to Queen Charlotte bigamous and his offspring by his Queen illegitimate.

George III succeeded to the throne on his grandfather's death, two weeks before his 77th birthday, in 1760. Unlike his grandfather, who had destroyed his father George I's will, the new King honoured all his grandfather's last requests. Six thousand pounds in banknotes were found in the late King's desk, with a note that the money was to go to his mistress, Lady Yarmouth. George not only complied with his wishes but added a further two thousand guineas to the bequest.

Although of German descent, the new King made much of the fact that he was the first of the Hanoverian kings to be born in Britain. In his first speech to Parliament, he declared "born and bred in this country I glory in the name of Briton." Horace Walpole has left an account of his impressions of the new King, "His person is tall and full of dignity, his countenance florid and good natured, his manner graceful and obliging, he expresses no warmth or resentment against anybody." Unlike both his Hanoverian predecessors, George was to prove popular with the British people.

Shortly after inheriting the throne, George again fell in head over heels in love, the object of his passion was the beautiful Lady Sarah Lennox, the daughter of the Duke of Lennox and a direct descendant of Charles II. Unlike Hannah Lightfoot, Sarah was of sufficient social standing to contemplate becoming Queen. The King appeared besotted, but his mother, who still held considerable influence over him, did not approve. She feared Sarah was too strong-headed and would usurp her influence with her son, which she was determined to cling to.

Augusta of Saxe-Gotha succeeded in ousting Sarah and George was quickly married to the very plain Charlotte of Mecklenburg-Strelitz, daughter of Carl Ludwig of Mecklenburg Strelitz and Elizabeth Albertine of Saxe-Hildburghausen. The eighteen-year-old Princess arrived in England after a tempestuous Channel crossing, George was said to be visibly disappointed at his first meeting with her at St. James' Palace. 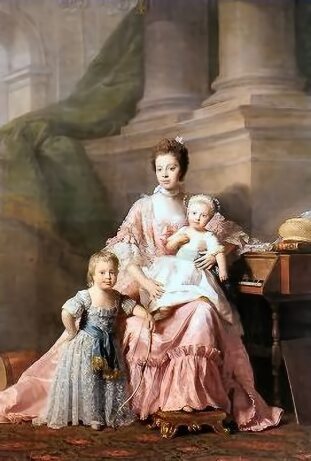 Charlotte was small and thin and has been described as having African features by her contemporaries. Baron Stockmar, her physician, is recorded as saying that she had "true molatto features." The new Queen had Moorish blood in her lineage, being descended several times from the thirteenth-century monarch, Alfonso III of Portugal and his mistress, Mourana Gib, described as being an African.

Lady Sarah Lennox, looking beautiful and resplendent, acted as bridesmaid at the wedding ceremony on 8th September 1761 at St. James Palace and far outshone the bride. In an embarrassing incident, the aged Earl of Westmorland had to be forcibly restrained from mistakenly doing homage to Sarah as Queen.

The King took his role as monarch very seriously and lead an exemplary domestic life with Queen Charlotte, which gained him the respect of his people. The couple became very close, the Queen always wore a diamond ring bearing a portrait of her husband and they produced a total of fifteen children. He firmly believed in the benefits of a simple diet and plenty of fresh air and was greatly interested in farming. The King, afraid of becoming obese, like many members of the Hanoverian family, ate sparingly of a light, almost vegetarian diet.

George's first Prime Minister, Lord Bute was highly unpopular, he was eventually forced into resignation. George III tried to banish party divisions in politics but was not successful in this aim. George was disturbed by the activities of "that devil" John Wilkes, who edited the political pamphlet, The North Briton. After Wilkes made a damning attack in his publication, the then Prime Minister, George Grenville, urged on by the indignant King, had him arrested on a general warrant and sent to the Tower.

When Wilkes was eventually released on a writ of Habeas Corpus, he fled to the continent, but returned to England in 1768 and stood for Parliament. After his election as an MP, George demanded both his arrest and expulsion from the House of Commons. 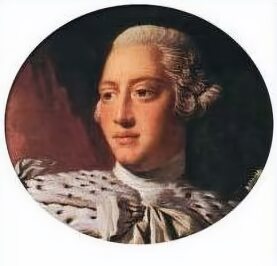 Lord North became Prime Minister in 1770 and clashed with the American Colonies over taxes imposed on them by the English Parliament, at which they had no representation. Their petitions were rejected and they rose against the British. Eventually, the colonies gained their independence. The American war, its political aftermath and family quarrels put great strain on George. William Pitt the Younger became Prime Minister in 1783. In the first decade of his ministry new trade links were established, new colonies formed and the country started to move forward with the Industrial Revolution.

The French King had his Queen had gone to the guillotine in revolutionary France and Napoleon was threatening Britain with invasion. Lord Nelson defeated the French at Trafalgar in 1805, acquiring the status of a national hero.

The King's relationship with his eldest son, George, Prince of Wales, followed the established Hanoverian pattern, being both strained and stormy. The irresponsible Prinny, as he was commonly known, was continually in great debt and the King looked censoriously on his eldest son's extravagance and political associates.

George III became seriously ill in 1788. The illness was considered madness at the time, but modern research has suggested that he suffered from a severe form of porphyria, a metabolic disorder caused by chemical insufficiency in haemoglobin production. Symptoms include skin sensitivity, strong abdominal pain and port-wine coloured urine accompanied by psychiatric symptoms. In severe cases, the illness causes convulsions and death. The theory that George had suffered from porphyria was first put forward by the British Psychiatrist, Ida MacAlpine and her son, Richard Hunter in 1966.

It has been further theorised that the disease was inherited from George's ancestress, Mary, Queen of Scots and her son, James I, who both seemed to also display some symptoms of the malady. James I's physician kept detailed notes on his royal patient, which describe his urine as being 'purple as Alicante wine' - a sure sign of porphyria.

George talked incessantly and often obscenely for hours at a time. He was subjected to the appalling medical treatment of the day, bound and gagged and strapped into a chair for hours. His urine was reported to have been blood red by his physicians. Examination of the medical reports of some of George's descendants indicate that several of them exhibited signs of suffering from porphyria, including Princess Charlotte of Wales and more recently the late Prince William of Gloucester, cousin of the present Queen and brother of Richard, Duke of Gloucester.

George eventually made a recovery and in the following twelve years suffered only slight attacks of his illness. After his recovery, his popularity, and that of Pitt continued to increase at the expense of Fox and the Prince of Wales. His humane and understanding treatment of two insane assailants, Margaret Nicholson in 1786 and John Frith in 1790, contributed to his popularity. 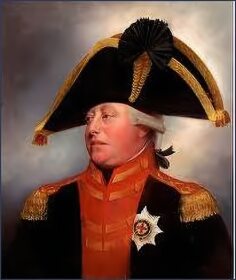 In 1810, he suffered a total relapse, from which he was never to recover, already virtually blind with cataracts and in pain from rheumatism, George III became dangerously ill. In his view, the malady had been triggered by stress over the death of his youngest and favourite daughter, Princess Amelia. The Princess's nurse reported that "the scenes of distress and crying every day ... were melancholy beyond description." The Queen continued to visit her husband but he failed to recognise her. His eldest son, George, Prince of Wales was appointed Regent. As it became apparent that George's illness was this time permanent, even Charlotte, his once devoted wife, sadly ceased to visit him.

The King existed at Windsor Castle for the next ten years, neglected and unkempt, a blind and deaf octogenarian. Even in his insanity he never forgot his exalted status, although he ceased to shave and now had a long white beard, he always wore a purple dressing gown with his Garter star pinned to his chest. He was reported to have had lucid moments when he agonized pitifully about what he had become. He was never informed when Queen Charlotte died in 1818.

At Christmas, 1819, George suffered another violent attack of porphyria, after talking incessantly for fifty-eight hours he sank into a coma, his favourite son, Frederick, Duke of York, was with him at the end He was mercifully released from his nightmare existence by death on 16th February 1820. His body was buried at St. George's Chapel, Windsor and was succeeded by the Regent as George IV.