The eldest son of George, Prince of Brunswick-Luneberg (later George II) and Caroline of Anspach , Frederick Lewis was born in Hanover as Duke Friedrich Ludwig of Brunswick-Lüneburg, on 1 February, 1707. 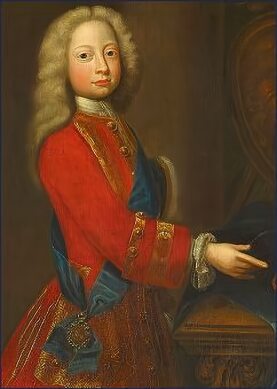 His grandfather, the Elector of Hanover, succeeded to the British throne as George I in 1714, on the death of the last Stuart monarch, Queen Anne, in accordance with the terms of the Act of Settlement. There were many with a far superior hereditary right to England's throne, but they were passed over to maintain a Protestant succession. Frederick, then aged seven, was left behind in Hanover, in the care of his grand-uncle Ernest Augustus, Prince-Bishop of Osnabrück, and did not see his parents again for fourteen years. He received his education in Hanover and had to participate in state ceremonial there in the place of his absent grandfather.

Frederick, nicknamed 'Poor Fred' was created Duke of Edinburgh, Marquess of the Isle of Ely, Earl of Eltham, Viscount of Launceston and Baron of Snaudon (Snowdon) by his grandfather, George I, on 26 July 1726. on the death of George I, his father succeeded to the throne he was summoned to England to renew his acquaintance with the parents he had not seen for fourteen years. He was created Prince of Wales on 8 January 1729 in London, at the age of 21. 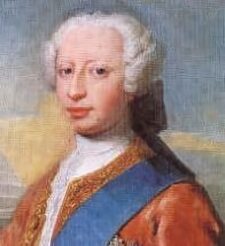 One of the George II's first acts as King was to make away with his detested father's will under the nose of the astonished Archbishop of Canterbury. George II was not a particularly attractive character, he was prone to rages against anyone with whom he differed, in the course of which he kicked his coat and wig about. The familiar Hanoverian pattern of his father's fractious relationship with his father was sadly echoed in that with his own eldest son, Frederick. They mutually loathed each other. His mother, Queen Caroline equally strongly disliked her eldest son stating "My dear first born is the greatest ass, and the greatest liar, and the greatest canaille, and the greatest beast, in the whole world, and I most heartily wish he was out of it."

Caroline made no secret of her preference of her younger son, William, Duke of Cumberland, known as 'Butcher Cumberland' due to the atrocities carried out against the Highlanders after the Battle of Culloden, during the 1745 Jacobite Rebellion. George II seriously considered a scheme for excluding Frederick from the succession to the throne and sending him to rule Hanover so that William, could succeed him.

Frederick married the Princess Augusta of Saxe-Gotha by whom he had a large family, including the future King George III. He also almost married Lady Diana Spencer, daughter of Charles Spencer, 3rd Earl of Sunderland and Lady Anne Churchill. Lady Diana was the favourite grandchild of the influential Sarah, Duchess of Marlborough, once a favourite of Queen Anne. The duchess attempted to marry Lady Diana to the Prince of Wales offering a massive dowry of £100,000. Frederick, who heavily in debt, readily agreed to the proposal, but the plan was vetoed by Robert Walpole and King George II. Lady Diana later married John Russell, the 4th Duke of Bedford. The wedding of Frederick and Augusta was celebrated on 27 April 1736, at the Chapel Royal in St James's Palace, London, her mother-in-law, Queen Caroline, had to translate the words of the marriage service for the Princess. 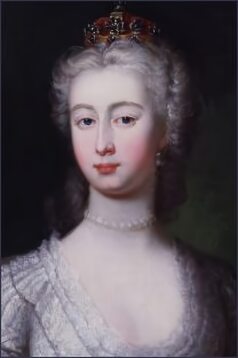 The birth of their first child, Princess Augusta, on 31 July 1737, took place at St James's after Augusta was moved in the middle of the night by Frederick to travel from Hampton Court Palace while in labour, to prevent his despised parents from being present at the birth. To ensure they would not be present when Frederick informed his parents of the pregnancy, he advised them that Augusta was due to give birth in October, when in fact, her due date was earlier in July. This lead to a rift between the prince and princess of Wales and the king and the queen. George II ordered the couple to leave St. James' Palace at which they moved to Kew Palace. The queen visited them before they left St. James' and made clear that she did not wish to see them again.

Queen Caroline died of a rupture on 1 December 1737 and is reported to have said of Frederick "At least I shall have one comfort in having my eyes eternally closed - I shall never see that monster again." George II refused to allow Frederick to see his mother, nor did he attend the funeral.

Frederick quarrelled with his father over the allowance alloted to him and when the increase was refused, he pressurised his political friends to introduce a motion into the House of Commons for an address to the King to increase the allowance. The prince sponsored a court of 'opposition' politicians at his residence of Leicester House. Frederick, in common with other members of the Hanoverian family adored music, he played the cello, unlike his father, he was a knowledgeable amateur of painting and also enjoyed the natural sciences and the arts. .

Frederick never succeeded to the throne, having predeceased his father. He died at Leicester House in London on 31 March 1751. The prince was hit a ball when playing cricket, a favourite game of his, the blow seems to have caused an abscess. He later caught a chill In his garden at Kew on a cold March day, which quickly turned to pleurisy. Frederick returned to his home at Leicester House in Leicester Square. He was bled by his doctors, the prescribed treatment of the day and despite this seemed to be improving until on the evening of the 20th, the abscess burst resulting in violent bouts of coughing. Horace Walpole reported that he put his hands on his stomach uttering, 'Je sens la mort '. His page felt him tremble and cried out, 'The prince is going.' Augusta who was stood at the foot of the bed then ran to him, but Fredrick was dead. A post mortem was carried out and reported the cause of death as suffocation after the abscess burst, but the general medical opinion was that he died of pneumonia. It is, however, now thought to have been a pulmonary embolism, a blockage of an artery in the lungs, which killed him. Frederick was buried at Westminster Abbey on 13th April.

Neither the King or any member of the royal family attended the funeral, but were represented by the Duke of Somerset and Frederick was largely unmourned by his father. His son George was a likeable and good natured youth whose relationship with his grandfather was not as difficult.

The children of Frederick, Prince of Wales and Augusta of Saxe-Gotha