As a shy young girl at the age of just sixteen, Augusta was sent to England to marry twenty nine year old Frederick, Prince of Wales, the heir to the British throne and eldest son of King George II and Caroline of Anspach. On arrival it was noted that she was long-limbed, gawky, unable to speak a word of English and was clutching a doll. The wedding was celebrated on 27 April 1736, at the Chapel Royal in St James's Palace, London, her mother-in-law, Queen Caroline, had to translate the words of the marriage service for the Princess. Augusta only spoke German and some French, so a tutor was found to teach her English. The princess was lonely, and accordingly her old governess was brought to England to keep her company. Having been raised in the Lutheran faith, Augusta was unhappy about receiving communion in the Church of England. She was only persuaded to do so when her mother-in-law Queen Caroline threatened to annul her marriage and return her to Germany. 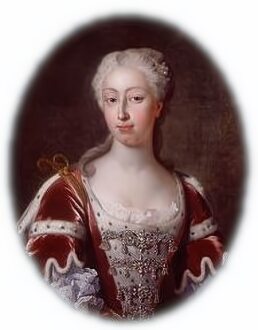 The birth of their first child, Princess Augusta, on 31 July 1737, took place at St James's after Augusta was moved in the middle of the night by Frederick to travel from Hampton Court Palace while in labour, to prevent his despised parents from being present at the birth. To ensure they would not be present, when Frederick informed his parents of the pregnancy, he advised them that Augusta was due to give birth in October, when in fact, her due date was earlier in July. This lead to a rift between prince and princess of Wales and the king and the queen. George II ordered the couple to leave St. James' Palace at which they moved to Kew Palace. The queen visited them before they left St. James' and made clear that she did not wish to see them again. Queen Caroline got her wish as she died several months later without reconciling with her son and daughter-in-law. 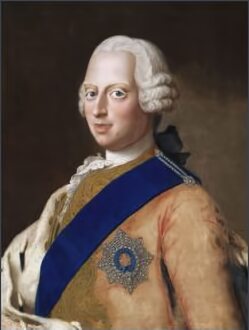 The marriage of Augusta and Frederick appears to have been a happy one. Despite indulging in fleeting affairs, Frederick was a good husband and father. In all the couple had nine children, the last of whom was born after Frederick's death.

Frederick died at the age of 44 in 1751 at Leicester House, from a burst abscess in the lung. Neither the King nor any member of the royal family attended his funeral, but were represented by the Duke of Somerset and Frederick was largely unmourned by his father. Upon receiving the king's condolences, Princess Augusta appealed to his better nature, informing him that that she placed herself and her children upon his mercy and protection. After which the relationship between George II and his widowed daughter-in-law improved.

Augusta was one of only three Princesses of Wales who never became queen consort. After her husband's death she was named as prospective regent for her eldest son George, which caused a political controversy. Soon afterwards, she came under the influence of John Stuart, 3rd Earl of Bute, her son's tutor, and rumours circulated that they were indulging in an affair and both were pilloried in the press. The Princess and Bute were burnt in effigy on the streets of London on many occasions, most famously in the riots stirred up by John Wilkes and his paper 'the North Briton'.

The Dowager Princess of Wales greatly extended Kew Gardens after her husband's death. Enlisting the aid of Lord Bute and the Reverend Stephen Hales, both well-known botanists, she followed her husband's plans for the garden, extending it, adding buildings and features, Sir William Chambers built several garden structures for her. One of these, the lofty Chinese pagoda built in 1761, still remains.

After the accession of her son as King George III, Augusta continued to recieve widespread hostility from the public. The year after his succession to the throne, he married Charlotte of Mecklenburg-Strelitz. Augusta's relationship with her daughter-in-law was strained. She reportedly made it difficult for Charlotte to establish social contacts by referring to court etiquette. Further more, she initially appointed a large part of Charlotte's court staff, among whom several were suspected to report to her about Charlotte's behavior.

Augusta died of cancer of the throat at age 52 at Carlton House and was buried at Westminster Abbey.

The children of Frederick, Prince of Wales and Augusta of Saxe-Gotha