The Chapel of St. Peter ad Vincula and Tower Green

The Chapel Royal of St. Peter ad Vincula (St. Peter in chains) is the parish church of the Tower of London. A low rectangular stone building, the chapel is situated in the northwest corner of the Tower's Inner Ward, by Tower Green and dates from 1520. The chapel now serves as a place of worship for the Tower's residents. 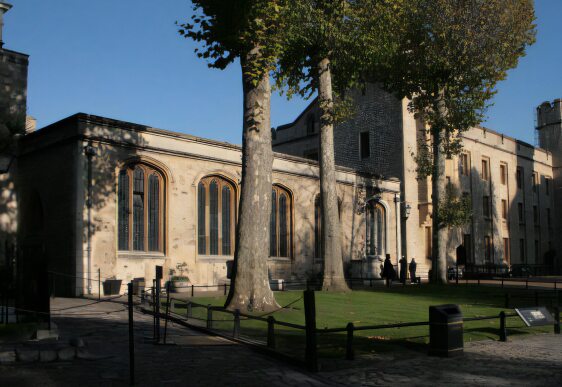 The original building which dated to around 1100, was destroyed by fire in 1512, the present building was rebuilt for Henry VIII by Sir Richard Cholmondeley in 1519-20, but a chapel has occupied its position since before the Norman conquest. St Peter ad Vincula is a Royal Peculiar, meaning that it is under the direct jurisdiction of the monarch rather than the bishop of the diocese. It is the burial place of many of the most famous prisoners executed at the Tower of London. 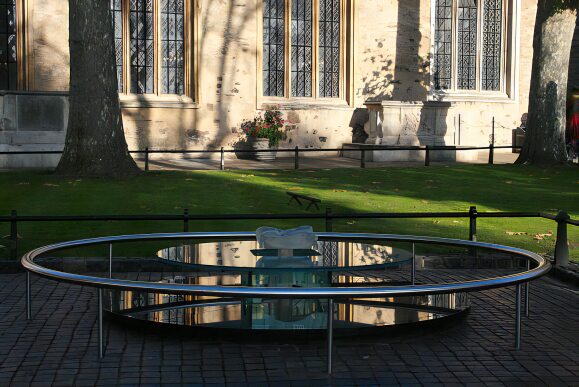 Outside on Tower Green stands an evocative modern memorial to those executed on the green, including William, Lord Hastings, whose hasty execution, without trial on the orders of Richard III, was conducted on a block of wood, Queens Anne Boleyn and Catherine Howard, Jane Boleyn, Viscountess Rochford, sister-in-law of Anne Boleyn, the aged Countess of Salisbury, last of the Plantagenets, all beheaded in the reign of Henry VIII, the tragic teenage Lady Jane Grey, nine days Queen of England, who was executed on the orders of her cousin Mary I and Robert Devereux, 2nd Earl of Essex, who led a rebellion against Elizabeth I. The memorial takes the form of a glass pillow resting on two polished disks, unveiled in September 2006, it bears the inscription 'Gentle visitor pause awhile : where you stand death cut away the light of many days here jewelled names were broken from the vivid thread of life : may they rest in peace while we walk the generations around their strife and courage : under there restless skies'.

The Chapel contains many superb monuments. In the northwest corner is a memorial to John Holland, Duke of Exeter, a medieval Constable of the Tower who died in 1447.

In the sanctuary, there is an impressive monument to Sir Richard Blount, who died in 1564, and his son Sir Michael died in 1610, both Tudor Lieutenants of the Tower, who would have witnessed many of the executions which took place there. 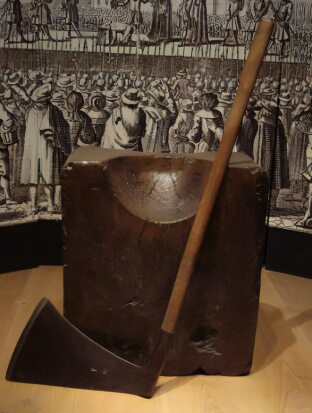 The Chapel of St. Peter ad Vincula is best known as the burial place of some of the most famous prisoners of the Tower, which include three queens, namely Anne Boleyn and Catherine Howard, the second and fifth wives of Henry VIII respectively and the tragic Lady Jane Grey, who reigned for nine days in 1553.

George Boleyn, brother of Anne Boleyn, accused of incest with her, was also buried in the chapel after his execution in 1536, as were Edmund Dudley and Sir Richard Empson, tax collectors for Henry VII. Thomas More and John Fisher, who incurred the wrath of Henry VIII and were subsequently executed, and later canonised as martyrs by the Roman Catholic Church, are also buried there, as is Henry VIII's minister, Thomas Cromwell, Earl of Essex, who was executed on Henry's orders in 1540. James Duke of Monmouth, the illegitimate son of Charles II, led a rebellion against his uncle James II and was executed on 15 July 1685, on Tower Hill. He too is buried in the chapel. Monmouth's execution was hideously bungled, the executioner took five strokes at his neck and even then the head was not completely severed and had to be finished off with a knife.

Victorian pavement in the Chapel of St Peter 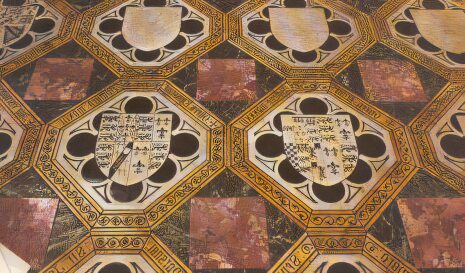 Thomas Babington Macaulay memorialised those buried in the chapel in his 1848 History of England, "In truth, there is no sadder spot on the earth than that little cemetery. Death is there associated, not, as in Westminster Abbey and Saint Paul's, with genius and virtue, with public veneration and with imperishable renown; not, as in our humblest churches and churchyards, with everything that is most endearing in social and domestic charities; but with whatever is darkest in human nature and human destiny, with the savage triumph of implacable enemies, with the inconstancy, the ingratitude, the cowardice of friends, with all the miseries of fallen greatness and blighted fame. Thither have been carried, through successive ages, by the rude hands of gaolers, without one mourner following, the bleeding relics of men who had been the captains of armies, the leaders of parties, the oracles of senates, and the ornaments of courts.

The chapel underwent extensive renovation in Victorian times. During the restoration, the pathetic coffins of many of the mangled victims of Henry VIII's tyranny were exposed in the nave. Included amongst these were the skeleton of a woman of 'excessively delicate proportions' which is thought to be that of Anne Boleyn, and that of an aged woman, clearly Margaret, Countess of Salisbury. Also uncovered was the skeleton of John Dudley, Duke of Northumberland, Lord Protector of the boy king, Edward VI, executed by Mary I, for his part in the usurpation of the crown in favour of his daughter-in-law, Lady Jane Grey, who along with his son Guildford Dudley, who was to become the pathetic young victim of his overriding ambition.

Included amongst these were the skeleton of a woman of 'excessively delicate proportions' which is thought to be that of Anne Boleyn was found at a depth of only 2 feet below the floor of the chancel. Dr Frederic Mouat, a surgeon, examined the remains his findings record:- "a female of between twenty-five and thirty years of age, of a delicate frame of body, and who had been of slender and perfect proportions; the forehead and lower jaw were especially well-formed. The vertebrae were particularly small." the skeleton also possessed " a well-formed round skull, intellectual forehead, straight orbital ridge, large eyes, oval face and rather square, full chin. The remains of the vertebrae and the bones of the lower limbs indicate a well-formed woman of middle height, with a short and slender neck. The hand and feet bones indicate delicate and well-shaped hands and feet, with tapering fingers and a narrow foot", the woman was said to have stood "five feet, or five feet three inches, not more" in height. It has been argued however that this skeleton was that of Anne's cousin and Henry's fifth queen Catherine Howard.

All were reburied in the crypt. Queen Victoria had a green and red marble memorial pavement laid in the sanctuary, which has the names and coats of arms of all those executed by King Henry VIII who lie beneath. A list of 'remarkable persons' buried in the chapel between 1534 and 1747 can be seen on a table on the west wall.

The Chapel of St. John PreviousNext The Medieval Palace