Margaret, Countess of Salisbury, last of the Plantagenets was the daughter of George Plantagenet, Duke of Clarence, and his first cousin Isabel Neville, eldest daughter of Richard Neville, Earl of Warwick, and his wife Anne Beauchamp. She was born at Farleigh Castle near Bath in Somerset on 14 August 1473 during the Wars of the Roses between the rival Houses of Lancaster and York. 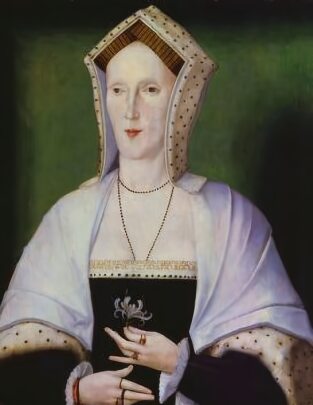 Over two years before Margaret's birth, in 1471, her maternal grandfather, 'Warwick the Kingmaker' was killed fighting against her paternal uncle, Edward IV, at the Battle of Barnet. When she was but three, Margaret's mother died two months after giving birth to a short-lived son, Richard. Her father convinced himself that his wife had been poisoned by a servant, Ankarette Twynho, who was promptly brought before the justices at Warwick. The unfortunate Ankarette Twynho was found guilty by a jury controlled by Clarence and hanged, he also fed rumours that Edward IV was a bastard, the product of an illicit union between Duchess Cecily of York and an archer, Blaybourne and that he cast doubts on the validity of Edward's marriage to the queen, Elizabeth Woodville. King Edward IV retaliated by attainting the Duke of Clarence. His lands and titles were forfeited and he was executed within the Tower of London, according to tradition, by being drowned in a butt of malmsey wine.

Her uncle Edward IV died when Margaret was ten years old and her young cousin, the boy king Edward V was proclaimed King. However her uncle, Richard, Duke of Gloucester, claimed that Edward IV's marriage to Elizabeth Woodville was invalid, his children illegitimate, and that Margaret and her brother Edward were debarred from the throne by their father's attainder. He ascended the throne himself as Richard III.

Richard III had his brother George's children, Margaret and her younger brother, Edward, Earl of Warwick, housed at Sheriff Hutton Castle in Yorkshire. Richard lost his throne and his life when he was defeated by the Lancastrian claimant Henry Tudor at the Battle of Bosworth in 1485. The new king, Henry VII, married Margaret's cousin Elizabeth of York, the eldest daughter of Edward IV. Her brother Edward, Earl of Warwick was imprisoned in the Tower of London. Edward was briefly displayed in public at St Paul's Cathedral in 1487 in response to the claims of the impostor Lambert Simnel to be the Earl of Warwick. In around November 1487, when Margaret was around eighteen, Henry VII married her to his cousin, Sir Richard Pole, whose mother Edith St. John was the half-sister of the king's mother, Lady Margaret Beaufort. Richard Pole was the son of Geoffrey Pole, who may have been descended from the Welsh princes of Powys.

In 1499, the pretender Perkin Warbeck, a handsome young man with a superficial resemblance to Edward IV, led a rebellion against Henry VII, claiming to be Warwick's cousin, Richard Duke of York, the younger of the Princes in the Tower. He was captured and later sent to the tower. A plot between Warwick and Warbeck for Warwick's escape was alleged to have been hatched. On 21st November 1499, Warwick attended a trial before his peers at Westminster, presided over by John de Vere, Earl of Oxford. He pleaded guilty. A week later, at the age of 24, he was beheaded for treason on Tower Hill.

It was thought at the time that Warwick was executed in response to pressure from Ferdinand II of Aragon and Isabella I of Castile, whose daughter, Catherine of Aragon, was to marry Henry's heir, Arthur Tudor, Prince of Wales. Catherine was later reported to feel guilty about Warwick's death, and that her trials in later life were punishment for it. She applied these miseries and disasters to have specially happened for the death of Prince Edward Plantagenet, son of the Duke of Clarence, brother to King Edward the Fourth; whom (most innocent) Henry VII. put to death to make the kingdom more secure to his posterity, and to induce King Ferdinand to give his daughter, this Catharine, in marriage to Prince Arthur". It has been claimed that Warwick was mentally retarded, this surmise is based entirely on a statement by the Tudor chronicler Edward Hall that Warwick had been kept imprisoned for so long "out of all company of men, and sight of beasts, in so much that he could not discern a Goose from a Capon.

Sir Richard Pole was appointed Chamberlain for Arthur, Prince of Wales, Henry's eldest son and heir to the throne. When Arthur married Catherine of Aragon, Margaret Pole became one of her ladies-in-waiting, Catherine felt guilty about the Earl of Warwick's execution and the pair eventually became firm friends, Catherine's entourage was dissolved when Arthur died of the sweating sickness in 1502, while still in his teens. When not at Court, Margaret lived chiefly at Warblington Castle in Hampshire and Bisham Manor in Berkshire. The marriage produced five children:- 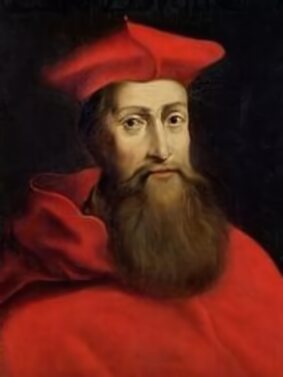 (1) Henry Pole, 1st Baron Montagu (c. 1492 - 9 January 1539), one of the peers in the trial of Anne Boleyn he married Jane Neville, daughter of George Neville, 4th Baron Bergavenny, and Margaret Fenne; he was beheaded by order of Henry VIII. A great-grandson of Henry Pole was Sir John Bourchier, a regicide of King Charles I.

(3) Geoffrey Pole (c. 1501 - 1558), Lord of the Manor of Lordington in Sussex, suspected of treason by King Henry VIII and accused of conspiring with Charles V, Holy Roman Emperor; he lived in exile in Europe, Geoffrey married Constance Pakenham, granddaughter and heiress of Sir John Pakenham. John Pakenham was ancestor to Sir Edward Pakenham, brother-in-law to Duke of Wellington.

On the death of her husband in 1504, Margaret was left with a small amount of property, Henry VII paid for his cousin Sir Richard's funeral. To ease her difficult financial situation, Margaret devoted her second son Reginald Pole to the Church, where he was to have an eventful career as a papal Legate and Archbishop of Canterbury. When Henry VIII ascended the throne in 1509, one of his first acts was to marry his brother's widow, Catherine of Aragon. Margaret Pole was again appointed as a lady-in-waiting to the new queen. Parliament restored her brother's lands to her in 1512, which were the Warwick and Salisbury lands of her Neville grandfather 'Warwick the Kingmaker' and she became known by the title of Countess of Salisbury. Margaret's eldest son, Henry Pole, was created Baron Montagu, another of the Neville titles.

Margaret was appointed Governess to Henry and Catherines' daughter, Princess Mary in 1520, the Princess was also her god-daughter and the pair will become very close when Mary was declared a bastard at the divorce of her parents in 1533, the Countess refused to return Mary's gold plate and jewels to Henry VIII. When Mary's household was broken up at the end of the year, Margaret asked to serve her at her own cost, but Henry VIII would not permit her to do. After the fall of Anne Boleyn in 1536, Margaret returned to court.

In May 1536, Reginald Pole finally broke with his cousin the king. The Spanish Ambassador Chapuys suggested to the Emperor Charles V that Reginald Pole should marry the Lady Mary, combining their claims to the throne. Chapuys also communicated with Reginald through his brother Geoffrey. Pole responded to books Henry sent him with his pamphlet, pro ecclesiasticae unitatis defensione, or de unitate, which denied the royal supremacy. Henry wrote angrily to the Countess of Salisbury, who wrote to her son reproving him for his "folly." In 1537, Pole was created a Cardinal. In 1539, he was sent to Emperor Charles V to organise an embargo against England, as a consequence his brother Sir Geoffrey Pole was arrested by an enraged King Henry VIII in August 1538. Under interrogation, Geoffrey confessed that his eldest brother, Lord Montagu, had been party to his correspondence with Reginald. Montagu, his cousin Exeter, and Lady Salisbury were all arrested and sent to the Tower in November 1538. In January 1539, Sir Geoffrey received a pardon, but Henry and Exeter were executed for treason.

In May 1539, Henry, Margaret, Exeter and others were attainted and sentenced to death. As part of the evidence for the Bill of Attainder, Thomas Cromwell produced a tunic bearing the Five Wounds of Christ, symbolising Margaret's support for Roman Catholicism and the rule of her son Reginald and the king's Catholic daughter Mary. Margaret was questioned by William Fitzwilliam, and Thomas Goodrich, Bishop of Ely. They reported to Thomas Cromwell that although they had "travailed with her" for many hours she would "nothing utter", and they were forced to conclude that either her sons had not included her in their plans, or she was "the most arrant traitress that ever lived." Margaret Pole, as she now was styled, was held in the Tower of London for two and a half years. She, her grandson Henry, the son of Lord Montagu, and Exeter's son were held together. These words were found on the wall of her cell and thought to have been etched there by Margaret:-

For traitors on the block should die;

My faithfulness stands fast and so,

Towards the block I shall not go!

Nor make one step, as you shall see;

Christ in Thy Mercy, save Thou me!

Chapel of St. Peter as Vincula, Tower of London 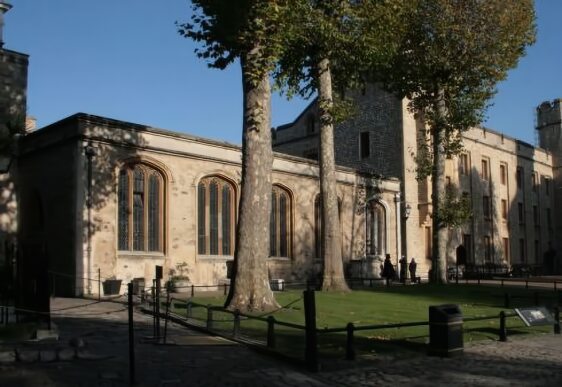 For two years, Margaret suffered much from cold and neglect in the Tower. On the morning of 27 May 1541, the now frail 67 year old was informed she was to die within the hour, she replied boldly that no crime had been imputed to her.

She was taken from her cell to Tower Green where a low wooden block had been prepared. She proudly refused to lay her head on the block and was dragged to it and forced down. As she struggled, the inexperienced executioner described as 'a wretched and blundering youth struck, his first blow made a gash in her shoulder rather than her neck. Ten additional blows were required to complete the execution. A second account relates how she managed to escape from the block and that she was hewn down by the executioner as she ran.

Her son, Reginald Pole, said that he would "...never fear to call himself the son of a martyr". She was later regarded by Catholics as such and was beatified in 1886 by Pope Leo XIII. It was expected that Margaret's young grandson, Henry Pole, would follow her to the block, but Henry VIII was unwilling to risk unfavourable public opinion and so he was deprived of a tutor and imprisoned in the Tower until his death, possibly from starvation, in 1542 or later.

Lady Margaret was buried in the chapel of St. Peter ad Vincula (pictured above left) within the Tower of London. The chapel underwent extensive renovation in Victorian times. During the restoration, the pathetic coffins of many of the mangled victims of Henry VIII's tyranny were exposed in the nave. Included amongst these were the skeleton of an aged woman, clearly Margaret, Countess of Salisbury. She was reburied in the crypt. Queen Victoria had a green and red marble memorial pavement laid in the sanctuary, which has the names and coats of arms of all those executed by King Henry VIII who lie beneath.

The Ancestry of Margaret, Countess of Salisbury