Margaret Beaufort, a key figure in the Wars of the Roses, was the mother of Henry VII and the daughter of John Beaufort, 1st Duke of Somerset and Margaret Beauchamp of Bletsoe. She was born at Bletsoe Castle in Bedfordshire on 31 May 1443. Her father was the son of John Beaufort, Earl of Somerset, himself the illegitimate son of John of Gaunt, Duke of Lancaster, through his liaison with Katherine Swynford, whom he later took as his third wife, their children then being legitimated by Richard II and the Pope, but their descendants barred from inheriting the throne by King Henry IV. Margaret's royal descent derived through John of Gaunt, who was the third surviving son of Edward III. 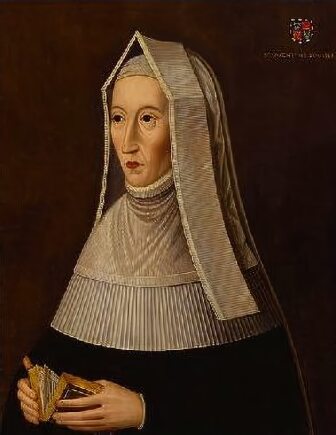 Her father, the Duke of Somerset died when Margaret was but one year old, after a failed expedition to France he was accused of treason and forbidden to appear in the king's presence and his death was rumoured at the time to have been suicide. Margaret was appointed the ward of William de la Pole, Earl of Suffolk. 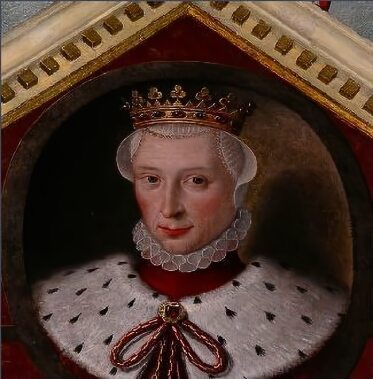 Margaret Beauchamp remarried in 1447, to Lionel de Welles, 6th Baron Welles, their son, John Welles, 1st Viscount Welles, Margaret's half-brother, was later married to Cecily of York, the third daughter of Edward IV. Lionel de Welles was slain at the Battle of Towton in March 1461, after which Margaret did not remarry.

At the age of about seven and one of the richest heiresses in England, Margaret was married to her guardian's son, John De La Pole, 2nd Duke of Suffolk, a union that was later dissolved. In 1455, Henry VI married Margaret, then aged twelve, to his maternal half-brother, Edmund Tudor, Earl of Richmond. Richmond was the illegitimate child of Henry's mother, Katherine of Valois (the widow of Henry V) and Owen Tudor, her Welsh Clerk of the Wardrobe. At the time of their marriage, Edmund was aged twenty-four.

Edmund was captured by Yorkists and imprisoned at Carmarthen Castle, where he contracted the plague and died. Margaret gave birth to his posthumous son, Henry Tudor, at Pembroke Castle, Wales on 28th January 1457. She had sought refuge there under the protection of her brother-in-law, Jasper Tudor, Earl of Pembroke and was but thirteen at the time of her son's birth, which was reported to be difficult. She was possibly damaged by the event, for, despite later acquiring two more husbands, Henry, to whom she was extremely attached, was to remain her only child.

Margaret was married for a third time to her second cousin Sir Henry Stafford (c.1447 - 1471)) son of Humphrey Stafford, 1st Duke of Buckingham. Both Sir Henry and Lady Margaret were supporters of the Lancastrian king, Henry VI. In 1462, when her young son Henry Tudor was just five years old, he was taken away from her and his wardship was given to William, Lord Herbert. Stafford later switched his allegiance to the House of York and towards the end of his life contributed to the restoration of Edward IV. Despite this, the marriage seems to have been a happy and affectionate one. Henry was seriously wounded at the Battle of Barnet and did not return to London with the victorious Yorkist army. On 17 April Margaret hurried from Woking to London and sent a rider to Barnet for news of her husband. Henry was taken home, but never recovered from his wounds and died on 4 October 1471. 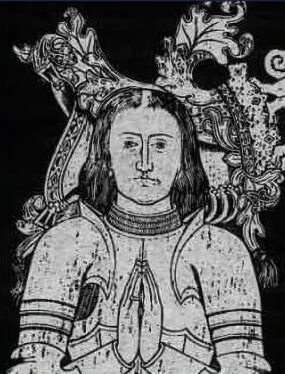 After the death of his guardian Lord Herbert, Henry went to his Uncle Jasper Tudor, they were besieged by the Yorkists at Pembroke Castle, but managed to escape and took ship to Brittany in 1471. Duke Francis of Brittany gave them refuge and protected Henry from Edward IV, who wanted to acquire possession of the young Lancastrian heir. He had nearly been captured and handed over to Edward IV on one occasion but he had escaped to the court of France, who had backed his expedition to England and his bid for the throne.

Margaret married for a fourth time at the age of 40 to Thomas Stanley, 1st Earl of Derby, the Lord High Constable and King of Mann, a powerful and trusted Yorkist supporter. Stanley introduced Margaret to the Yorkist court where she became well-liked, Elizabeth Woodville later chose her as a godmother for one of the York Princesses.

On the accession to the throne of King Richard III, Margaret befriended the new queen Anne Neville and carried Anne's train at her coronation. However, while serving the new king and queen, Margaret was secretly plotting with the dowager queen, Elizabeth Woodville, and was involved in Buckingham's rebellion against the new regime. Richard III stripped Margaret of all her titles and estates, and transferred her property to her husband.

As Queen Elizabeth Woodville's sons, the Princes in the Tower, were presumed dead, the two women agreed to the betrothal of Margaret's son, Henry, to Elizabeth of York, the eldest daughter of Elizabeth and Edward IV. Thereby arranging a marriage alliance which would draw support from both Yorkists and Lancastrians. The Earl of Derby's support was a decisive factor in her son's victory over Richard at The Battle of Bosworth Field, by which he acquired England's throne and it was Stanley who placed England's crown on Henry's head on the battlefield.

During the reign of her son, Lady Margaret was referred to as "My Lady the King's mother", sometimes signing herself 'Margaret R', was said to dominate her daughter-in-law, Elizabeth of York, taking charge of the royal nurseries and arranging the education of her grandchildren. Margaret was reluctant to accept a lower status than the dowager queen Elizabeth Woodville, or even her daughter-in-law, the queen. She wrote the Book of the Royal Household, determining how state and private occasions should be performed. 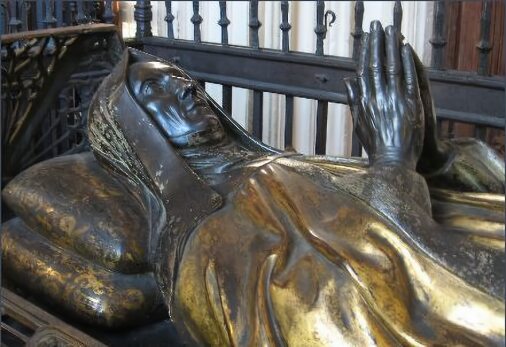 Margaret Beaufort was an extremely pious woman who is best remembered as a generous patron of learning and philanthropy, who founded Christ's College, Cambridge and patronised the publishers William Caxton and Wynkyn de Worde. She endowed chantries and made frequent gifts to churches and monasteries.

The Earl of Derby's brother, Sir William Stanley, whose timely intervention had saved the king's life at Bosworth, was later suspected of involvement with the pretender, Perkin Warbeck and executed. A fact which Margaret's husband resented. Tradition states that when the King later visited Lord Derby, he was given a tour of the house, ending on the roof, where Henry advanced to the edge of the leads, the Earl's fool, pointed downwards and whispered, "Tom, remember Will!" upon which the King is reported to have retreated with haste. Sir William Stanley's execution was to eventually lead to the estrangement of Lady Margaret and her fourth husband.

Margaret was very fond of all her grandchildren, but her favourite was said to be her namesake, Margaret Tudor, to whom she was also godmother and who was later married to James IV, King of Scots. Lady Margaret left Margaret Tudor 'a gyrdell of gold conteyning xxix linkes, with a grete pomaunder at oon ende, ponder: xviii unces iii quarters' in her will.

Henry VII died on 21st April 1509, although in failing health, Lady Margaret survived her son, dying on June 29, 1509 at the age of sixty-eight, in the Deanery of Westminster Abbey, during the early months of the reign of her grandson, Henry VIII. Bishop Fisher was present at her deathbed. She was buried in a black marble tomb topped with a bronze gilded effigy by the Renaissance sculptor Pietro Torrigiano, in the Henry VII Chapel at Westminster Abbey.