The Battle of Towton

The Battle of Towton, a bitter blood bath and one of the largest and bloodiest battles ever fought on British soil, took place in a snowstorm on a bleak plateau near the village of Towton in Yorkshire.

The Lancastrian King Henry VI, who suffered from periodic bouts of insanity, transferred the right of succession to his cousin Richard Plantagenet, Duke of York, by an Act of Settlement signed in October 1460. His strong willed wife, Queen Margaret of Anjou was unwilling to accept the unpalatable fact that her only son, Edward, Prince of Wales was thereby disinherited. The Queen, "a strong laboured woman", was fiercely protective of her son and his rights. 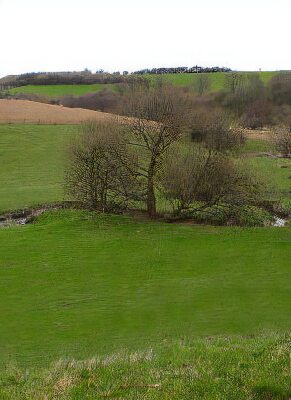 At the resulting three battles, Wakefield, which took place on 30 December 1460, proved a Lancastrian victory at which the Duke of York, his seventeen year old son, Edmund Earl of Rutland and his ally and brother-in-law, Richard Neville, Earl of Salisbury were all slain. Mortimer's Cross, fought on 2 February 1461, at which the deceased York's eldest son Edward, defeated the Lancastrians, and St. Albans, on 17 February 1461,a further Lancastrian victory. Through the machinations of his powerful cousin, Richard Neville, Earl of Warwick, Edward of York was crowned King of England at Westminster Abbey. The Lancastrians had retreated into the north, and accordingly Edward IV, who was determined to avenge his father and brother, marched with a large army to meet them.

The Yorkists travelled north along three routes. William Neville, Lord Fauconberg, Warwick's uncle, led a contingent ahead of the main army, under Edward's command. John de Mowbray, 3rd Duke of Norfolk, gathered forces in the east before meeting up with Edward before the battle. Warwick proceeded to the west of the main army, through the Midlands, recruiting along the way. On 28 March, the leading elements of the Yorkist army arrived at a ruined crossing at Ferrybridge that spanned the River Aire. While in the course of rebuilding the bridge they were ambushed by a small band of Lancastrians led by John Clifford, Baron de Clifford or or 'Bloody Clifford' as he was sometimes known.

Being made aware of the skirmish, Edward came to aid, Fauconberg was dispatched to ford the river at Castleford, the Lancastrian Henry Earl of Northumberland, who should have been guarding the crossing, arrived too late, the Yorkists crossed the ford and headed to attack the Lancastrians at their flank. Many of the retreating Lancastrians were slain, Clifford himself, who was directly responsible for the death of Edward's younger brother, Edmund, Duke of Rutland at Wakefield was killed by an arrow in the neck. The Lancastrians proceeded to Tadcaster, around 2 miles to the north of Towton and set up camp there. Some of the Yorkist soldiers are thought to have taken shelter for the night in the tiny church of St Mary's Church, at Lead, which stands near the battlefield of Towton.

Plan of the Battle of Towton 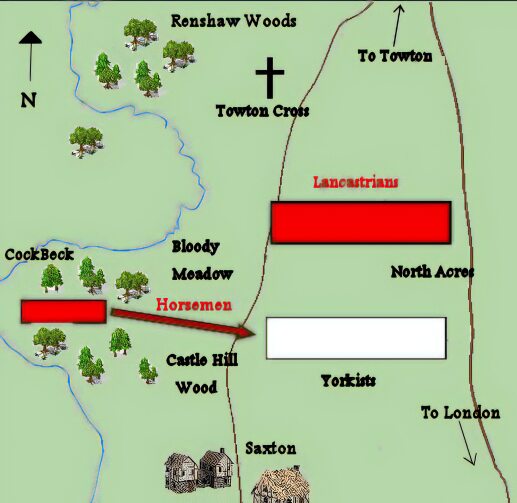 At daybreak the following day, Palm Sunday, 29 March, 1461, the two opposing armies prepared for battle, Contemporary records state that both armies were huge, claiming that in excess of a 100,000 men fought at Towton. The battle took place on a plateau between the villages of Saxton, which lay to the south and Towton, to the north. The Cock Beck wound around the plateau from north to west. The Lancastrian army was commanded by Henry Beaufort, 3rd Duke of Somerset, supported by Sir Andrew Trollope, a veteran of the Hundred Years War, Henry Holland, 3rd Duke of Exeter and Henry Percy, 3rd Earl of Northumberland. The Lancastrians lined up in battle array on the north side of the valley, blocking the Yorkist advance to York. Edward IV's army took position just as the first snow began to fall.

The Yorkist left flank came under an ambush attack by men positioned in Castle Hill Wood and several fled. Edward seized command of the left-wing and urging his men forward, an imposing figure at 6-foot-3 1/2-inches tall, by his example he prevented a rout, encouraging his soldiers to stand their ground. Indecisive fighting continued for hours until the arrival of the Duke of Norfolk with fresh Yorkist reinforcements which attacked the Lancastrian left flank.

Fierce hand to hand fighting went on for hours until eventually, around ten hours from the start of the battle, the Lancastrians began to flee, many removed their helmets and armour to enable them to run faster, rendering themselves more defenceless to the attacks of the pursuing Yorkists. No quarter was given, fleeing across Bloody Meadow, many Lancastrians were cut down from behind or were slain after they had surrendered, while many were drowned in the river while attempting to cross to safety.

Several bridges in the area collapsed under the weight of fleeing men in armour, plunging many into the freezing water. So many died that the chroniclers record that the Lancastrians eventually fled across these "bridges" of bodies. Local tradition asserts that the river ran red with blood for days afterwards.

The Lancastrians suffered heavy losses, it was said that all the way from Towton to Tadcaster the fields were full of bodies. At Tadcaster, some Lancastrian troops made a stand but were slaughtered.

Sir Andrew Trollope, his son David Trollope, and Northumberland were all killed in the battle, as was Lord Dacre, who was said to have been fallen victim to an archer who was perched in a tree, Dacre was buried in Towton churchyard. Writing nine days after the battle, George Neville, then chancellor of England, wrote that 28,000 men had died that day, a figure which was in accordance with a letter sent by Edward IV to his mother.

On receiving news of the resounding Yorkist victory, Henry VI together with Margaret of Anjou and their son, Edward Prince of Wales, fled to safety in Scotland by some of the Lancastrian lords who had escaped the battlefield, including Somerset, Roos and Exeter.

Archaeological findings in the late twentieth century have shed light on the final moments of the battle. In 1996 workmen at Towton Hall accidentally uncovered a mass grave, containing 43 individuals, all-male, ranging in height from 5'4" to 6'0", which were believed to be the remains of men who were slain during or after the battle. Further bodies were later recovered from beneath the dining room at Towton Hall.

The remains were excavated by trained osteoarchaeologists and archaeologists and Bradford University conducted a detailed forensic study of the remains. The bodies, with ages ranging from 15 to over 45, have been radiocarbon dated to the time of the battle, exhibited a horrifying catalogue of injuries, with severe damage to their upper torsos; arms and skulls were cracked or shattered. Serrated marks on the skulls, in the region of the ear lobe, implied that ears were cut off. Some of the skeletons displayed healed wounds that are presumably from previous battles they fought in.

The site where the individuals were buried lies around a mile from the area which is understood to be the site of intense fighting in the battle. Towton Hall is situated within the path of the route. It is thought that these men were killed as the Lancastrian army broke and fled the field.

One skeleton, known as Towton 25, of a man aged between 36 and 45 when he died had the front of his skull bisected: a weapon had slashed across his face, cutting a deep wound that split the bone. The skull was also pierced by another deep wound, a horizontal cut from a blade across the back.

St. Mary's Chapel, Lead provided shelter for some of the combatants on the cold March day in 1461 when the Battle of Towton was fought and has changed little over the passing centuries.