The Battle of Mortimers Cross

The Battle of Mortimer's Cross was fought by the River Lugg near Wigmore in Herefordshire, at a site not far from the border with Wales. The young Edward, Earl of March, (later Edward IV) head of the Yorkist faction faced an army commanded by lords loyal to Lancastrian King Henry VI.

Richard, Duke of York, the father of Edward the nineteen-year-old Earl of March, had been killed by Lancastrians at the Battle of Wakefield. Edward, now the new Duke of York, attempted to prevent a Lancastrian force from Wales, led by Owen Tudor, (the second husband of Henry V's Queen, Catherine of Valois) and his son Jasper, Earl of Pembroke (the illegitimate half brother of King Henry VI) from joining up with the main Lancastrian army.

Edward, who had been mustering forces in the West Marches had spent Christmas in Gloucester, where he had heard the disastrous news of the Yorkist defeat at Wakefield and the death of his father and younger brother, the seventeen year old, Edmund, Earl of Rutland in battle, he intended to return to London.

However, on learning of the approach of the Lancastrian army he prepared to block their advance with an army of around five thousand men to prevent them from meeting up with the main Lancastrian force under Margaret of Anjou which was approaching London, Edward marched north to Mortimer's Cross near Wigmore, between Leominster and Leintwardine in Herefordshire to meet the enemy.

Owen Tudor's army included the Welshmen recruited from the Tudor estates in Carmarthen and Pembroke, along with French, Breton and Irish mercenaries led by James Butler, 5th Earl of Ormond. It thought that the Lancastrian army approached from the south via Hereford Lane.

Edward, based at Wigmore Castle, had gathered troops from along the borderlands, there were also significant Welsh forces on the Yorkist side especially Sir William Herbert of Raglan and his supporters, who included Sir Richard Devereux, Herbert's father-in-law, and John Milewater, John Tuchet, Lord Audley, Lord Grey of Wilton, and Humphrey Stafford, the future Earl of Devon.

As day broke, the meteorological phenomenon known as parhelion or sun dog occurred, due to highly unusual atmospheric conditions, three suns were seen to be rising in the sky. Many in that superstitious age were alarmed and filled with dread and awe at the sight of this strange phenomenon, but Edward reassured his terrified troops that the phenomena represented the Holy Trinity and was a sign that God was on their side. He later adopted it as his emblem, the "Sun in Splendour", representing the three surviving sons of York. The event was later dramatized by William Shakespeare in the play King Henry VI, Part 3.

One of the most poorly documented battles of the Wars of the Roses, only the sketchiest outlines of the Battle of Mortimer's Cross have been recorded.

Plan of the Battle of Mortimer's Cross 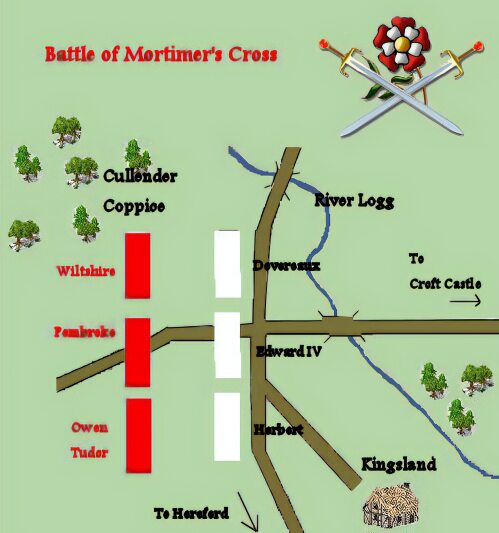 The Yorkists positioned their archers at the crossroads (now the modern A4110 and B4362 road junction) to prevent the Lancastrian army from advancing. Edward led the centre, William Herbert, the Yorkist Earl of Pembroke held command of the left wing, while Sir Richard Devereux, Herbert's father-in-law led the Yorkist right.

Jasper Tudor, who commanded a smaller army, with about a thousand men less than Edward, was inexperienced in military matters and may not have originally wanted to meet Edward of York in battle, but by midday, it was clear to the Lancastrians that they would have to engage him in battle if they were to proceed and cross the River Lugg. On the misty morning of 2 February 1461, the Lancastrians formed up for battle in three divisions. Pembroke controlled the centre and his father Owen Tudor the right. The left under the command of the Earl of Wiltshire included a large number of lightly armed Irish, Breton and French mercenaries.

The Lancastrians opened the battle with the Earl of Wiltshire's division attacking Edward's right-wing and forcing them to retreat across the road. Jasper Tudor attacked the Yorkist centre but was held back, Owen Tudor attempted to surround Edward's left-wing but was defeated which led to the rout of his forces.

Jasper Tudor's 's division was then also smashed leading the Lancastrian soldiers to flee in disarray and panic, around 4,000 Lancastrians were slain, although Pembroke and Wiltshire managed to escape the field they were pursued by the Yorkists as far as the town of Hereford, around seventeen miles away, where Owen Tudor himself was taken, prisoner.

Pembroke and the Earl of Wiltshire escaped the battlefield, to fight another day, Owen Tudor was not so lucky and following his capture he was imprisoned at the Green Dragon Inn at Hereford, from where he was subsequently beheaded along with other prisoners.

He is reported to have expected a reprieve because of his relationship with the Lancastrian royal family. He was reportedly unconvinced of his impending fate until the red collar was ripped off his doublet by the executioner. At which he is alleged to have cried that "the head which used to lie in Queen Catherine's lap would now lie in the executioner's basket". His head was set on the market cross, where a madwoman combed his hair and washed his face, setting lighted wax torches round about it.

Owen Tudor was buried in a chapel at the Church of the Grey Friars at Hereford. A modern stone plaque in Hereford’'s high street marks the spot where his execution is said to have taken place. Jasper Tudor captured Roger Vaughan in 1471 and took his vengeance on the man who he held responsible for his father's death. The grandson of Owen Tudor and Queen Catherine of Valois, Henry Tudor, the son of their eldest son Edmund Tudor and Lady Margaret Beaufort, was later to become the first King of England of the Tudor dynasty as Henry VII.

Margaret of Anjou had not been present at Wakefield and Edward's cousin, Richard Neville, Earl of Warwick, later known as 'Warwick the Kingmaker, who held the captive King Henry VI, blocked the route of advance of Margaret of Anjou's army to London and engaged the Lancastrians at the Second Battle of St Albans.

The subsequent battle proved to be a Lancastrian victory, which cleared the route to London for their army. Margaret accordingly advanced unopposed to London, however her army's reputation for pillage preceded her, causing the Londoners to bar the gates on them. Margaret's forces withdrew through Dunstable and Edward and Warwick entered London on 2 March, where Edward was proclaimed King of England.

Within a few weeks, he had confirmed his hold on the throne with a decisive victory in a bitter blood bath at the Battle of Towton.

The Second Battle of St. Albans PreviousNext The Battle of Towton