Henry VII's father, Edmund Tudor, was the half-brother of Henry VI, born of an illicit union between Queen Catherine of Valois, widow of Henry V and Owen Tudor, her Welsh Clerk of the Wardrobe.

Edmund Tudor was a direct descendant of the twelfth-century Welsh warrior Ednyfed Fychan ap Cynwrig (circa 1170 - 1246), who became seneschal of Gwynedd in North Wales, serving Llywelyn the Great and his son and successor Dafydd ap Llywelyn. He was a ninth-generation descendant Marchudd ap Cynan, Lord of Rhos, Lord Protector of Rhodri Mawr, King of Gwynedd. He is said to have come to prominence whilst in combat against the army of Ranulph de Blondeville, 4th Earl of Chester, who attacked Llywelyn at the request of King John of England. He is said to have beheaded three English lords in battle and presented them to Llywelyn, who ordered him to change his coat of arms to display three heads to commemorate the deed. 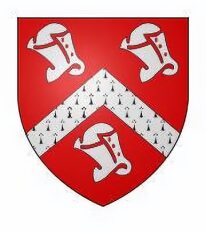 As a result of his service he was granted large tracts of land across North Wales, including Penmynydd. He married Gwenllian, daughter of Lord Rhys. Gwenllian's mother was Gwenllian ferch Madog, the daughter of Madog ap Maredudd, the last Prince of a unified Powys. The couple had six or seven sons, each of which followed their father into the service of the Princes of Gwynedd. He died in 1236 and was buried at Llandrillo yn Rhos Church, at Rhos-on-Sea, in North Wales.

Ednyfed's son Goronwy ab Ednyfed (c. 1205 - 17 October 1268) was seneschal to Llywelyn ap Gruffudd between 1246 and 1256 and was the founder of the Tudor family of Penmynydd. Tudur Hen or Tudur ap Goronwy (died 1311), the son of Goronwy, is known to have participated in the Madog ap Llywelyn uprising and is named as Madog's steward in the Penmachno Document. A wealthy landowner, he married Angharad ferch Ithel Fychan.

His son, Goronwy ap Tudur Hen, served as a soldier in Scotland and possibly fought at the great Scottish victory of Bannockburn in 1314. His son Tudur Fychan, married Margaret ferch Thomas of the Gwynedd royal family. She was descended from Llywelyn ab Iorwerth on her mother's side and the Plantagenet king's John, Henry III and Edward I on her father's side. Their son, Maredydd ap Tudur, or Meredith Tudor, (died 1406) following in the family tradition, supported the 1400 Welsh uprising of his maternal cousin Owain Glyndwr.

Meredith's brothers Rhys ap Tudur, Sheriff of Anglesea and Gwilym ap Tudur, rekindled the uprising in 1402, when they along with 16 other men, captured Conway Castle and held it against the English for around two months. Rhys was executed in 1412 in Chester for his involvement in the affair. Meredith's life was spared but much of the Tudor family's lands at Penmynydd were forfeited to the crown.

Meredith attempted to improve his fortunes by moving to London and changing his son's name from Owain ap Maredydd to Owain Tudor. Ironically if he had taken his father's name, rather than that of his grandfather, the Tudor dynasty would have gone down in history as the Meredith Dynasty. Owen was made the ward of his father's second cousin, Lord Rhys. At the age of seven, he was sent to the English court of Henry IV as page. He went on to fight at Agincourt for Henry V in 1415. By all accounts Owen was a handsome young man, the chroniclers dwell upon his beauty.

After the death of Henry V on 22nd August 1422. Owen was appointed as keeper of the wardrobe to his twenty year old widow, Queen Catherine of Valois, the daughter of Charles VI of France, and at some point he became the Dowager Queen's lover. Legend relates that he caught the Queen's eye when she saw him swimming, or that he tripped and fell into her lap when dancing. No documentation has survived of Owen's marriage to Catherine of Valois in 1429. The discovery of at least three of the queen's illegitimate children had caused scandal at the time, and was seen as an insult to the memory of the great Henry V. Owen and Catherine produced at least six children in all.

Despite this, Henry VI bestowed the Earldom of Richmond on Edmund and that of Pembroke on his brother Jasper and they in return became staunch supporters of the House of Lancaster, another son of Owen and Catherine, Owen, became a monk. Henry also knighted his stepfather Owen, made him Warden of Forestries and appointed him a Deputy Lord Lieutenant. On 2nd February 1461 Owen led the Lancastrian forces at the Battle of Mortimer's Cross for his step-son against Edward, Earl of March, the Yorkist claimant to the throne. The Lancastrian's were defeated in battle and Owen was subsequently beheaded at Hereford. He was reported not to have been convinced of his impending death until the collar was ripped off his doublet by the executioner. At this point, he is alleged to have said that "the head which used to lie in Queen Catherine's lap would now lie in the executioner's basket". His head was set on the market cross, where a madwoman combed his hair and washed his face, setting lighted wax torches round about it. 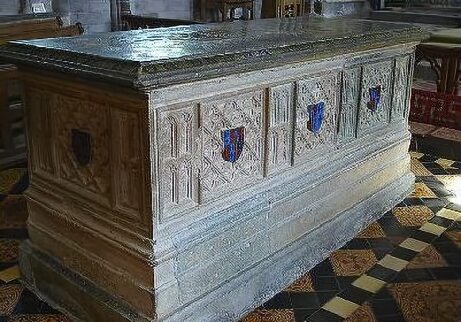 Edmund Tudor, (Welsh: Edmund Tudur) the eldest son Owen and Catherine was born in 1430, at Hadham in Hertfordshire, one of his mother's manors. Catherine of Valois retired to Bermondsey Abbey in 1436, where she died in 1437, he and his brother Jasper were brought up in the care of Katherine de la Pole, Abbess of Barking, with whom they remained until 1442.

At the age of 24, Edmund married the 12-year-old Lady Margaret Beaufort on 1st November 1455 at Bletsoe Castle. Lady Margaret, from whom Henry VII derived his debatable claim to the throne, was an intelligent and learned woman, she was said to be the heir of John of Gaunt after the extinction of Henry V's line.

This was arguable since her descent was through Gaunt's illegitimate son John Beaufort, born of the Duke's affair with his long term mistress Katherine Swynford, whom he later married. It was accepted that the Beauforts were later legitimized by King Richard II, but a clause had been inserted into the document debarring the Beauforts from the throne.

At the outbreak of the Wars of the Roses, Edmund was captured by Yorkist William Herbert in 1456 who imprisoned him at Carmarthen Castle, where he died of the plague on 3 November 1456, leaving his 13-year-old widow seven months pregnant with their child.

Margaret was taken into the care of her brother-in-law, Jasper Tudor. Edmund's posthumous son, the future Henry VII, was born at Jasper's stronghold of Pembroke Castle on 28th January 1457. The birth was a difficult one, both Margaret and her child were close to death, due to her youth and small size. The circumstances of the birth would leave her unable to bear another child.

Edmund Tudor was buried at Carmarthen Grey Friars. His remains were removed in 1539 at the dissolution of the monasteries during the reign of his grandson Henry VIII, to the choir of St David's Cathedral.